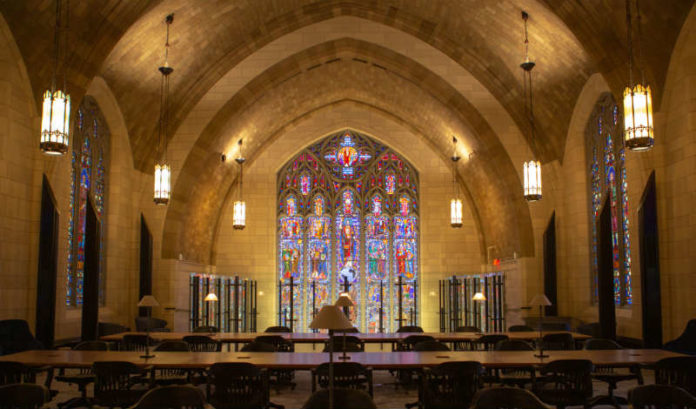 The grand opening of a new facility has begun a new chapter for Audible, its employees, New Jersey business leaders and the greater Newark community.

Audible founder and CEO Don Katz, elected officials, business leaders, employees and members of the Newark community came together Friday to celebrate the grand opening of the company’s Innovation Cathedral. Once home to the Second Presbyterian Church, a congregation founded in 1811, the cathedral will now serve as an office facility for 400 Audible employees.

Audible did not immediately clarify whether the employees would be new hires, or moved from another facility and where.

The Innovation Cathedral, aligned with Audible’s goals to support students, interns and entrepreneurs and grow a tech ecosystem, seeks to revitalize the growing Newark business community.

Katz said the Innovation Cathedral was a proud landmark for Newark and a powerful symbol of Audible’s commitment to the city for over a decade.

“We have defined ourselves by the strategic pursuit of what a successful company can mean in ways that transcend what it does — and today is proof that our efforts are yielding positive outcomes for business and invention culture, for the many talented people who want to work with us and for the comeback of this great American city,” he said. “Doing the right thing is a responsibility all corporations must take seriously — and that companies anchored in cities like Newark have an obligation to lead.”

Built in 1933, the 80,000-square-foot cathedral was reimagined to maintain its historical elements while also reflecting a modern and innovative workplace. Its distinctive stained-glass windows and organ pipes remain, but new additions include game areas, an auditorium, a refurbished bowling alley, an exhibit space, work cafes and lounges.

“Audible’s restoration of this historic landmark into a center of innovation and tech job creation — including jobs for Newarkers — is one powerful example of the over $4 billion in economic development occurring across the city today, but it is so much more,” he said. “It is emblematic of a company with a moral compass driving inclusive growth, elevating our students with educational tools and internships, and supporting the local economy by living local and buying local.”

When Audible’s headquarters made the move to Newark in 2007, it became the city’s fastest-growing private employer, with 1,650 full-time employees. The company’s mission seeks to catalyze Newark residents by offering jobs and training programs, as well as incentives including housing subsidies for employees who choose to move to the city from elsewhere.

Katz said that moving Audible to Newark was one of the best decisions the company has made.

“In addition to our growth, the economic impact and job creation catalyzed by Audible and Newark Venture Partners is a call to arms for other companies who are joining us and who should join us here to thrive as we have,” he said. “Continuing to invest in Newark is as important as anything else we do.”