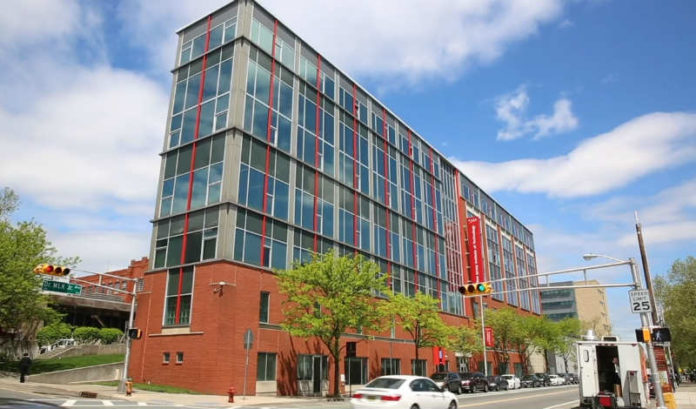 New Jersey Institute of Technology announced Tuesday it is renaming its College of Architecture and Design for renowned architects J. Robert and Barbara A. Hillier, in recognition of a gift from the Hilliers that represents the largest donation in NJIT’s history.

The J. Robert and Barbara A. Hillier College of Architecture and Design at NJIT was formally announced on campus following NJIT’s undergraduate commencement ceremony at the Prudential Center in Newark.

“The Hilliers are icons in the world of architecture, and we are incredibly proud to have this school carry their name,” NJIT President Joel S. Bloom said.

“Their involvement with and support of NJIT have been extensive and incredibly valuable over the course of many years, and this gift will have a transformative effect on our students, faculty and research within the areas of architecture and design.”

During the 1990s, the Hilliers’ firm designed the architecture school at NJIT that will now bear the Hillier name. The project incorporated open and closed studios; an exhibition and conference gallery; high head-room space for construction, structural and materials testing; and long views of Newark and Manhattan.

Illuminated at all hours to allow students to work around the clock, the building is referred to as “the lantern on the hill.” It won the firm a New Jersey Chapter Design Award from the American Institute of Architects.

“NJIT is very forward-thinking in everything that it does. I believe that architecture needs to look forward as a profession, more today than ever before. This inspired us to think that NJIT would be a good place to support the future of architecture,” J. Robert Hillier said.

“Our hope is that this support will improve access to architectural education and advance architectural research at NJIT, which is a major research university. This gift really matters to NJIT, and that means a lot to Barbara and me.”

“I think the leadership at NJIT is very special,” she said. “They have been looking for ways to enhance the programs they have, not just in architecture, but in other disciplines as well. And they really embrace all of their students and provide them with a very strong education from which to launch their careers.”

The Hilliers, both architects, are co-founders and principals of Studio Hillier LLC, located in Princeton. Their precedent firm, Hillier Architecture, was the third-largest strictly architectural firm in the country and was identified by the magazine Architectural Record as one of the best-managed firms in the U.S.

Their interdisciplinary design firm counts hospitals, corporate headquarters, universities, independent schools, arts centers and museums, and residential properties among its many projects around the world. The Hilliers have received more than 300 state, national and international design awards for their commitment to “place, sustainability and the built environment,” while also offering expertise in master planning, urban land use strategy and historic preservation.

Among their many notable commissions are the 5 million-square-foot Sprint world headquarters in Overland Park, Kansas, the Sydney Harbour Casino in Australia, the Las Colinas Convention Center in Irving, Texas, and the World Headquarters for GlaxoSmithKline in London. The firm was also the executive architect and interior designer for the Louis Vuitton Tower on 57th Street in Manhattan. Their historical restoration work includes the U.S. Supreme Court Building in Washington and the Virginia State Capitol.

In the educational arena, the Hilliers have worked for over 100 colleges and universities, including Princeton, Yale, Cornell, Columbia and Brown of the Ivy League, as well as Duke, Howard, Penn State, Mount Holyoke and Bryant University, where they designed the original Tupper Campus.

Their firm has designed 17 private international schools and has done several buildings on the campuses of the Peddie School and the Lawrenceville School. In their hometown, they were responsible for the design of the Princeton Medical Center in association with HOK and the Princeton Public Library, one of approximately 40 libraries they have designed across the country.

Like his late father, James Hillier, the director of research for RCA, who developed the first working electron microscope as a graduate student, J. Robert Hillier is a recipient of an honorary degree from NJIT. He also received the NJIT President’s Medal for Lifetime Achievement in 2009 and the AIA’s Michael Graves Lifetime Achievement Medal in 2007. He was named New Jersey’s Entrepreneur of the Year by Inc. Magazine in 1989.

As a member of the core faculty at Princeton University’s School of Architecture, J. Robert Hillier has lectured extensively throughout the United States at schools of architecture and to AIA chapters. He is a member of the board of overseers of the Foundation at NJIT and has served on the board of visitors of the university’s Albert Dorman Honors College since 1996, when he was its first chairman.

Barbara Hillier has received many honors for her architectural work, including numerous AIA awards and the distinguished Chicago Athenaeum American Prize for Architecture. She has lectured and served on design juries at the University of Virginia, the University of Pennsylvania, Cornell University and Temple University, among other academic institutions. Her work has been featured in such prestigious publications as the New York Times, Architecture + Design and Metropolis.

The college was granted accreditation in 1978 and has since expanded its academic and research offerings with undergraduate degree programs in architecture, interior design, digital design and industrial design, and graduate-level programs in architecture and infrastructure planning. It continues to play an integral role in architectural and design education in New Jersey and the region.

“The Hilliers’ generosity will have a lasting impact on the quality of architecture and design education at NJIT for future researchers, practitioners and leaders,” he said. “Their gift will allow us to further invest in people, faculty and students, while also promoting innovative programs and research.”