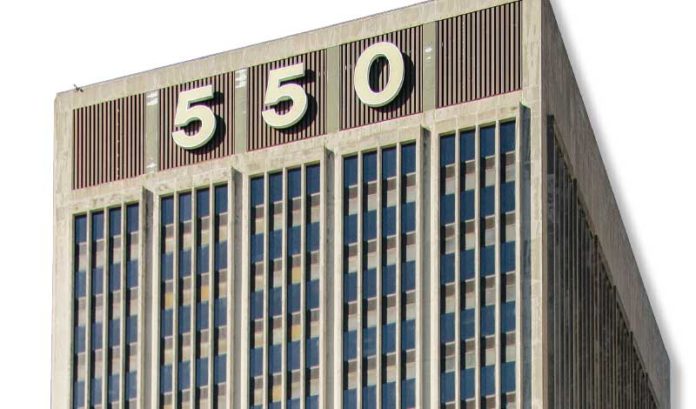 The office building at 550 Broad St. in Newark was sold earlier this month … by auction.

But it’s not what you think.

This was not a distressed sale. In fact, it may have been a preview of future sales in the sector.

The building was sold on an online platform, RealINSIGHT Marketplace, which is owned by CWCapital.

The auction, which had 11 registered bidders, lasted two days.

The deal is expected to close this month, so final numbers are not official, but bids started at $12 million — with the final bid on the platform coming in at $19 million.

James Shevlin, president and chief operating officer of CWCapital, said the company has done more than $2 billion in sales nationwide since 2017 — and is growing each quarter.

Shevlin said this was the first auction sale his company has done in Newark, but the 10th in New Jersey, and he is expecting to do many more.

“It is a trend and it should be a trend,” he told ROI-NJ.

“I’ve been doing this for 30 years,” he said. “At first, I rejected the auction process. But, now, I continue to see it growing. We’re becoming very accepting of this process in the broker industry.”

Shevlin thinks more people in the industry are coming around. In his mind, it helps both sellers and buyers.

“From a seller’s perspective, you get a national look from players who normally would not have been shown the asset,” he said.

Buyers, meanwhile, get more of a real-time feel during the sale, he said.

“In a traditional sale, you submit a first-round bid and you may get invited back to the next round,” he said. “But you usually don’t know where you stack up against the other buyers.

“On an auction platform, you get to see each click — and can see where the next guy is clicking. If you want to win the asset, you have to be ready to click.”

“The technology has matured and has gotten better, providing real insights,” he said. “The platform acts as the technology in the back of the house and help us with marketing, based on the data.”

But while Schultz sees the platform helping the industry, he doesn’t necessarily believe it will transform it.

“Real estate is still a local business,” he said. “In the end, it’s still a conventional local broker working the markets and calling the local and the national press. This just speeds up the process.”

And it can drive up the price.

“Local buyers pay more attention when they know that we have national buyers coming in,” he said. “In this case, we had a lot of New York buyers. So, it was a great way to conjure up all this interest.”

Schultz only has one complaint: the name.

“We always try to find a word other than auction, especially in this current market environment,” he said. “We like to call it more of a controlled sale on steroids. This sale is not any kind of a distressed sale. This was the sale of a trophy skyline asset.”