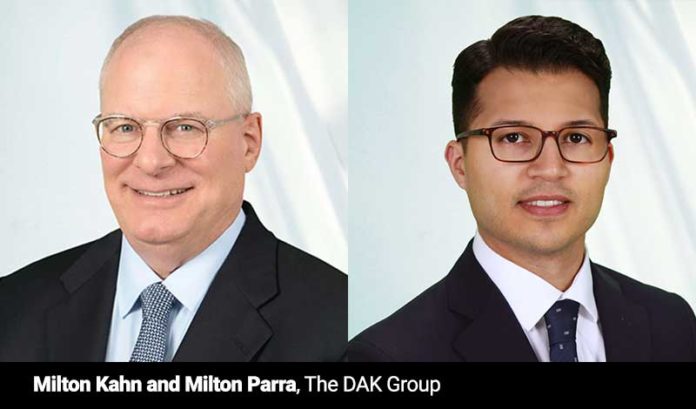 The DAK Group, a middle market investment bank specializing in mergers, acquisitions, business sales and other strategic advisory services, is pleased to announce its expansion with the appointment of Milton Kahn as chief operating officer and the addition of Milton Parra as a senior analyst.

“We have grown and built DAK by attracting great people to work at our firm,” said Alan J. Scharfstein, president of the Rochelle Park-based DAK Group. “Through our expansion, we continue to offer best-in-class service to our clients with superior, personal attention throughout every step of the process.

“Milt Kahn has demonstrated exceptional leadership experience throughout his career. He has contributed to DAK’s growth and has mentored our next generation of leadership. We are excited that he has agreed to expand his role at DAK.” 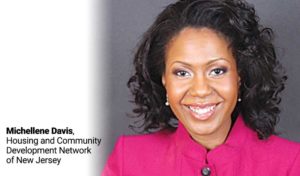 The Housing and Community Development Network of New Jersey honored Michellene Davis with a prestigious award for her work in the areas of economic and community development. Davis is a noted national thought leader on health, gender and economic equity and speaker, and is presently executive vice president at RWJBarnabas Health in West Orange.

The Housing and Community Development Network’s mission is to promote economic justice and empower individuals in need through increased housing options and financial opportunities for struggling communities. The awards were given as part of the group’s celebratory 30th anniversary luncheon.

“Community development and redevelopment are necessary aspects of addressing social determinants of health and in striving to create a more equitable future. This is why I am so grateful for the ability to work in partnership with the Housing and Community Development Network and humbled by this award,” said Davis. “Individuals need stable, affordable, healthy housing, reliable neighborhood development, the ability to work where they live and affordable access to health and health care in order to thrive. New Jersey’s Housing and Community Development Network has made great strides in addressing these issues historically for decades.” 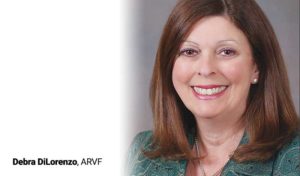 Debra P. DiLorenzo has been appointed to the board of trustees of the Alicia Rose Victorious Foundation, also known as the ARVF Corp. DiLorenzo has served as CEO and president of the Chamber of Commerce Southern New Jersey since 1994.

During that time, the chamber has become the first and only chamber in the U.S. to have earned ISO 9001: 2015 Certification, an international quality management system designed to help organizations ensure they meet the needs of their customers. She is retiring from the chamber at the end of the year.

In addition, Rob Curley has been appointed to the board. As South Jersey Market President of TD Bank, Curley oversees all commercial and small business lending throughout Mercer, Burlington, Camden, Gloucester, Cumberland, and Salem counties as well as oversees all corporate and charitable giving throughout that footprint. 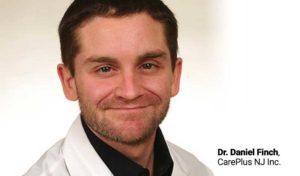 Care Plus NJ Inc., a pioneer in integrated primary and behavioral health services for adults and children, has named Dr. Daniel Finch the vice president of population health strategies and director of psychiatric urgent care services. In his new role, Finch will lead the team that offers clinical urgent care psychiatric services, as well as lead the development of business relationships and processes.

He will focus on delivering person-centered health solutions to specific population age groups, engaging and maintaining strong industry relationships within the customer-base, and overall marketplace, to foster strong strategic relationships in accordance with the policies and standards established by CarePlus.

“Dr. Finch has consistently demonstrated his extraordinary leadership in psychiatric care and recognizes the vital role that community-based providers play in ensuring individuals get the coordinated and integrated care they need,” said Joe Masciandaro, CEO and president, CarePlus NJ, Inc. “His compassion, commitment and full understanding of the range of physical, psychological, medical and social issues that individuals face makes him the perfect candidate for this role. With the addition of his professional expertise, CarePlus will not only enrich its psychiatric services, but we will further improve the health and wellness of the communities we serve.” 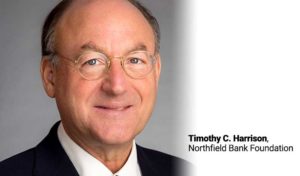 The Northfield Bank Foundation announced that Timothy C. Harrison has been named as chairman of its board, succeeding Susan Lamberti, who will remain on the board of directors.

Harrison has served as a board member of the Northfield Bank Foundation since 2014 and has served on the board of Northfield Bancorp Inc. since 2013. Harrison is a principal with TCH Realty & Development Co. LLC and is a licensed attorney in the state of New York and the commonwealth of Pennsylvania.

Lamberti, a retired educator, has served as chair of the foundation since its inception in 2007, and on the board of directors of Northfield Bancorp Inc. from 2001 to 2017. 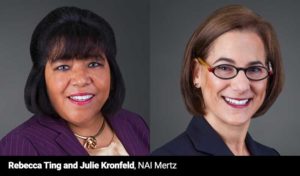 Becky Ting, a 24-year veteran with the firm, has been promoted to senior vice president-Office Division. Ting is a past president of the SIOR New Jersey chapter and a member of the NAI Global Office Council. She is a licensed salesperson in New Jersey.

Julie Kronfeld will now serve as vice president-Office Division. Kronfeld is also a member of the NAI Global Office Council. She is a licensed salesperson in New Jersey, Pennsylvania and Florida. 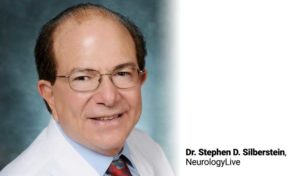 Silberstein is a professor of neurology and director of the Jefferson Headache Center at Thomas Jefferson University Hospital who lectures extensively on the pathogenesis, neurobiology, diagnosis and treatment of headache.

“We look forward to having Dr. Silberstein join the NeurologyLive team,” said Michael J. Hennessy Jr., president of MJH Associates Inc., parent company of NeurologyLive. “Dr. Silberstein is the perfect leader for NeurologyLive, and we’re so excited that he accepted this role and will help improve our team’s ability to grow and be the go-to resource for neurology professionals.” 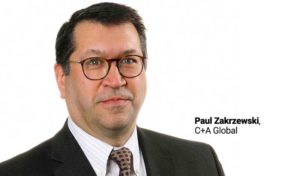 C+A Global has selected Paul Zakrzewski as the company’s new head of global marketing. Zakrzewski is an entrepreneurial, forward thinking and dynamic business leader. Joining an impressive team of executives, Paul brings vast experience and a proven track record to the organization.

In his previous roles, Paul focused on all corporate and product marketing activities, including advertising, public relations, tradeshows, digital marketing, packaging and retail materials. He has held senior positions at Haier America, SIRUI USA, Manfrotto Distribution US, Samsung Electronics America, Konica Minolta and Estee Lauder. He will be a critical member of C+A Global, leading all marketing channels and instilling his passion and creativity throughout the organization.

“I am really excited about joining the amazing team at C+A Global,” he said. “I am looking forward to bringing my experience to the team and take our marketing efforts to the next level and beyond.”

Michael was previously assistant vice president and controller and, in his new role, will be responsible for overseeing the commissions, financial reporting, purchasing/office services and treasury functions.

Northfield Bank, a wholly-owned subsidiary of Northfield Bancorp Inc., announced that Salvatore Saba has joined the bank as vice president of commercial lending for the NJ East Region.