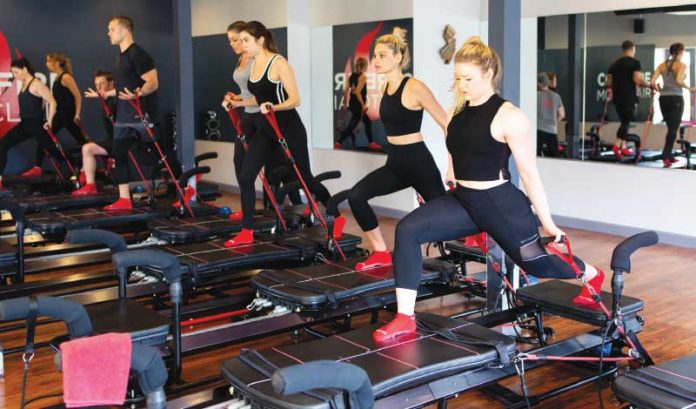 Caitlin DiRuggiero and Angela McCaffrey, both 30, attribute their success to having pursued their passions early in life.

“I’m confident that, unless someone was as passionate as we are about what we do, they could not do what we do,” McCaffrey said. “Motivation can’t push you as far as passion can.”

It only makes sense that McCaffrey and DiRuggiero would be co-founders and co-owners of COREFIRE — a high-intensity, low-impact workout that they say incorporates strength, energy and balance from both the body and the mind.

They currently have locations in Montclair and Ridgewood.

“In the beginning, people saw boutique fitness as a luxury,” DiRuggiero said. “But, now, with time constraints getting shorter and shorter, people want to be able to gain the most benefits they can within the shortest amount of time.

“They want to work out smarter — not harder.”

Then, while McCaffrey attended Providence College to study finance and DiRuggiero attended the University of Scranton to study marketing, the duo worked together as janitors during an internship for ABM Industries, a real estate management company, in 2009, before graduating and relocating to San Diego together to work in real estate.

It was one year later, upon learning their mutual friend would be battling cancer at the age of 21, that they decided to run a marathon to raise funds for leukemia and lymphoma research.

“We both hate running,” McCaffrey said. “But we both have families with a history of diabetes and heart failure, and we, too, were trending in that direction because of the weight we had gained.

“We decided that, if our friend had to struggle through something uncomfortable, we certainly could find it within ourselves to do the same.”

However, their training stalled halfway through, McCaffrey said, until a friend recommended they try a workout method created by Sebastien Lagree.

“Within a month, we were back up and running — plus our blood sugar and cholesterol dropped,” McCaffrey said. “It literally changed our lives and we wanted to help change other people’s, too.”

DiRuggiero and McCaffrey sold everything they had to move back to New Jersey in 2012 and bring the workout to the East coast.

“We saved enough from our careers in San Diego to move back and open our own studio,” DiRuggiero said.

The duo also became certified Pilates instructors and fitness coaches in 2013 through Equinox and Lagree Fitness, run by founder and CEO Lagree, the inventor of the method and the machines DiRuggiero and McCaffrey would license to create their own brand and found COREFIRE in Montclair in 2014.

“You will never get the same workout twice,” DiRuggiero said.

“You’ll also never hear a coach say anything about losing weight, even though that is a scientific benefit of our workout,” McCaffrey said. “COREFIRE is not only about looking good, it is about focusing your effort and determination on becoming as strong as possible as safely and quickly as you can while being surrounded and supported by a fun, nonjudgmental community.”

After achieving success with their first location, DiRuggiero and McCaffrey said they decided to open a second in Ridgewood in 2016 while also becoming licensed real estate salespeople with the Erin Crawford Team at Keller Williams NJ Metro Group.

“The skillsets are similar,” McCaffrey said. “We’re coaching people in community-oriented environments to make the best decisions, whether that be investing in real estate or investing in themselves via exercise.

“It’s all about honesty and transparency.”

To run both businesses, they knew they would need to rely on the strength of their relationship, McCaffrey added.

“We see both of our businesses the same way we saw our coaches when we were younger,” she said. “We can’t have our hands in everything, but we can make sure the team is running smoothly. So, if Cait is taking care of one side one day, I’m taking care of the other.

“And the reason why it works so well is because of our trust in one another as well as the rest of our team.”

The numbers speak to their success.

COREFIRE — which charges $33 for a single session and $290 for unlimited monthly sessions — now serves more than 600 active members across its two locations.

And McCaffrey said that, because more than 70% of clients return within 30 days of their first visit and nearly 90% of their current 11 employees have been with them since the beginning, COREFIRE has been able to grow by nearly 18% annually.

Which, McCaffrey said, means she and DiRuggiero will be able to open a third location of COREFIRE within a year.

“COREFIRE can thrive in areas where people see our workout as more of a life insurance policy rather than a luxury,” McCaffrey said. “They want to invest in themselves and their futures by saving long-term on potential health issues.”

“Our best audiences are those located in very busy commuter towns that tend to support local businesses, where people both work and have kids — and where people really value their health and well-being, but also need to get the best service as quickly as they can,” DiRuggiero said.