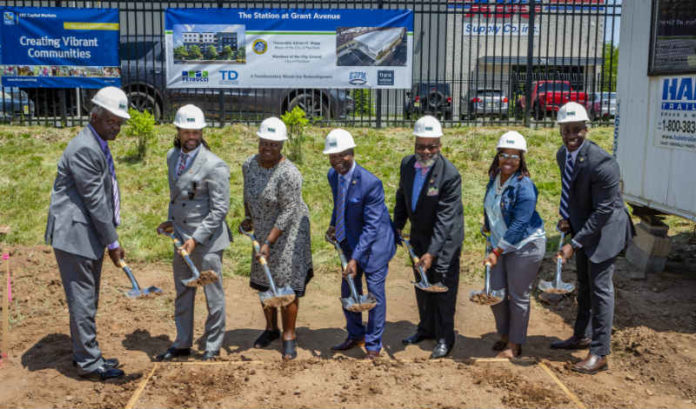 Even the piles of dirt, stacked taller than most of the construction equipment, were looking good, said Joylette Mills-Ransome.

The Plainfield council president was speaking at the groundbreaking on Wednesday for a new housing development, The Station at Grant Avenue.

“We cannot leave anyone behind,” Plainfield Mayor Adrian O. Mapp said at the event. “Often times, we hear that dirty word known as gentrification, where people are pushed out. But we are making sure that the residents that live here and want to be here have quality and affordable workforce housing.”

South Second Street Redevelopment — a partnership between J.G Petrucci Co. Inc. and TD+Partners — along with the mayor and members of the council, broke ground on the five-story, 90-unit residential community that, according to city officials, will revitalize a site that has been vacant for over 30 years.

The site has been vacant mainly due to environmental issues.

“Not only are we going to retain the people that are already here, but we are opening up the city for people to come in from wherever they are,” said Mapp.

When completed, the complex will be the largest mixed-use economic development project in Plainfield’s Fourth Ward in over 50 years.

The energy-efficient building will offer amenities including on-site parking, and the residences will feature stone countertops, hardwood flooring and Energy Star appliances, including full-size washers and dryers.

The new housing development is the second phase of a $40 million mixed-use redevelopment project. Phase one consisted of the construction of a 44,000-square-foot facility for ABC Supply Co., a national wholesale supplier of building and construction projects.

Planning for the project began in 2015 and is expected to be completed by April 2020.