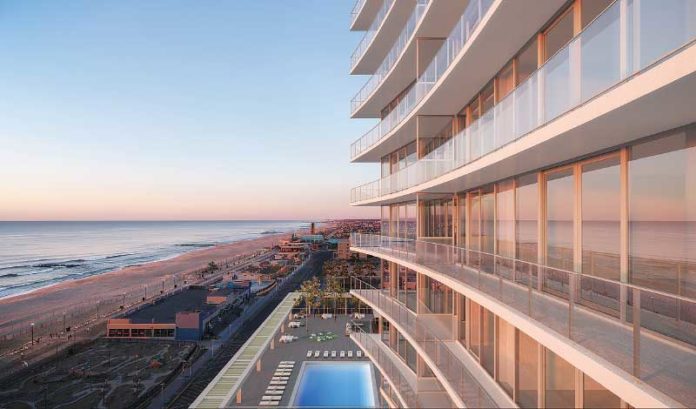 New Jersey towns that have shied away from development are now doing real estate in style.

High-end residential developments are finding their footing across the Garden State — properties that capitalize on a trend toward more amenities as well as more space at more of a luxury price-point.

A price point like $6 million — that’s the most expensive listing in Asbury Park, a beachside town that hasn’t had success with new development in many decades. It now has the iStar-developed Asbury Ocean Club, a mix of luxury condos (including that $6 million penthouse) and a boutique hotel.

Brian Cheripka, the vice president of development at iStar, a firm that gobbled up vacant land and abandoned structures in Asbury Park as part of a massive redevelopment plan, said the Shore town hasn’t had a new hotel in recent memory.

“This is an area that’s been trying to redevelop since the mid-’80s,” he said. “We’re the third developer to try to do this. And we’ve shown that, in contrast, there’s a stability we’re able to bring.

“We’ve signaled a change to the community (that) in a small way invites people back to this Jersey Shore town.”

The leadership of the real estate investment firm tried to kick development into high gear a decade ago, following its acquisition of land in Asbury Park from a borrower that defaulted.

“Our CEO, Jay Sugarman, always saw the potential of this community and what it could be,” Cheripka said. “It has this rich history of music, architecture and everything else.

“From our perspective, we have this tremendous community and a whole lot of people around the region and the world that have already heard of Asbury Park because of Bruce Springsteen or visiting here. But, for whatever reason, you also had this history of failed development.”

Asbury Ocean Club is the centerpiece of plans for what will be a decade-long redevelopment of the town’s milelong waterfront under iStar. And the project’s approach for remaking Asbury Park into a residential destination is to take a cue from high-end, amenity-packed developments in places such as Miami and Manhattan.

It’s not the only story of high-end development in a place without much history of it, even if it stands out for how long-stalled development has been there. There are other developers that think now’s the time for luxury.

Another New Jersey exemplar is Mill Creek Residential, a nationwide developer. That firm has brought an upscale apartment community to Parsippany, which never had a significant high-end residential market to match its vibrant office market.

“It’s a town that almost prides itself on having modest plans for growth,” he said. “It’s not greatly affected by huge improvements in the economy or terribly affected when the economy goes in the other direction. And, for us, it’s a strong demographic with a lot of reliable metrics.”

Modera Parsippany, which was completed and opened a year ago, is a 212-residence community nestled into an area that houses headquarters for a number of big-name companies. The property, which was more than half leased out by the end of last year, aims to provide an upscale living experience for those local employees.

Tepper said that, in an area that doesn’t fit the description of an urban environment, such as Parsippany, people focus more of the size and quality of the home or apartment they’ll live in rather than just the amenities or location itself. The expected size of living quarters is trending upward, even for millennials that want to be close to major metropolitan centers.

For many reasons, more high-end developments are on the way, and maybe where you least expect it.

No one told Ralph Zucker, “If you build it, they will come,” but he did it anyways.

And they have come — they, being towns far outside New Jersey that were impressed with what Zucker’s Somerset Development did with a massive, dilapidated laboratory, the famous Bell Labs.

After the firm recently transformed that facility into Bell Works, an indoor downtown-like setting in suburban Holmdel that the firm refers to as a metroburb, it was asked to redevelop a vacant former AT&T campus corporate in Illinois and do something very similar.

The firm, which has been redeveloping tired real estate assets for about 15 years, was approached by quite a few building owners and local governments that wanted their own version of this self-contained urban core concept after the Bell Works project was completed several years ago.

“A lot of municipalities took notice and saw that there’s an opportunity to solve one of the biggest conundrums in real estate: What to do with these vacant suburban office parks that are all over the place?” he said. “With Bell Works, we really perfected our approach to that, a concept we call the metroburb.”

As much as the idea resonated far and wide, Zucker said not every property is right for this new approach to building design.

“You have to have the right demographics, the right skillset and job network, the right access to transit and the ability to fit in all the different parts you have in an urban core — residential, retail, hospitality, wellness and fitness and of course the office space — into a facility,” he explained.

“So, while there’s a lot of underutilized corporate office parks, the potential for them to become a true metroburb is few and far between.”

Somerset Development moved forward with acquiring the 150-acre property in Hoffman Estates because it was one of the few properties that does check all the boxes, Zucker added. The project is also going by the name Bell Works.

“This (property) really hit all of our criteria,” Zucker said. “We’re excited about it.”

Navigating the pandemic: Gladys Vonglahn is pivoting her cleaning service to...