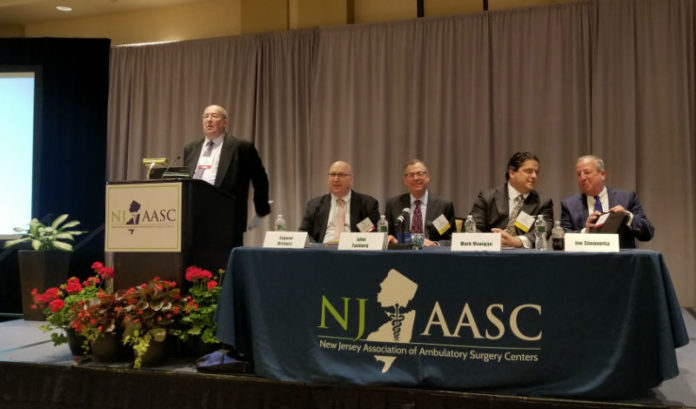 A staff shortage at the state Department of Health has created a backlog of applications for single-room surgery centers — and the problem could cost the businesses time and money.

A Department of Health official spent the better part of an hour answering questions and fielding criticisms about the backlog, due to high turnover, at an annual meeting of the New Jersey Association of Ambulatory Surgery Centers, held Wednesday in East Brunswick.

Eugene Brenycz, a regulatory officer at the DOH, encouraged the crowd to, if their licensing needs weren’t being met, feel free to work their way up the ladder at the department to move license approvals along.

“We’ve had a lot of turnover in the office in just the last half of the year,” he said. “The director retired, two analysts were promoted, the supervisor retired, our assistant commissioner retired and one of the analysts was promoted to supervisor. So, right now, we’ve got at least three counties that are covered by other analysts.”

The root of the licensing issue traces back to a law passed by the Legislature and signed by Gov. Chris Christie just before he left office in January 2018.

The one-room surgery bill required that even single-room surgery centers or medical offices that have only one room dedicated to surgery would need to be licensed the same way as any other health care facility.

This meant new regulations, inspections and the potential to have their license suspended and up to two years to fix whatever problems are cited.

But, many surgery center owners and operators said Wednesday the process has been confusing and opaque.

Jeff Shanton, executive director of the NJAASC, said many of his members are investing in capital improvements in anticipation of what the inspector might find — based off of rumors of what has been cited at other centers.

That, Brenycz said, is not a good strategy.

“Too many of you are a round peg we are trying to fit in a square hole,” Brenycz said.

“It should be an open book test, not a closed book test,” he said. “That’s what you’re asking for, which is reasonable.”

Brenycz said that, prior to the law, he was able to personally review every license application that came in, but that is now handled by a team of analysts assigned to each county — which have been moved to another building from the one the DOH is currently in.

Some surgery center owners and operators shared concerns about having to shut down and their businesses being at risk of closure because of the delays.

Mark Manigan, a vice president at RWJBarnabas Health who previously consulted for NJAASC, said the law was not meant to harm surgery centers.

“A fundamental tenet of the law was that it should not put people out of business or cause them undue hardship,” he said. “That was a key element for the sponsors and the governor when he signed it. The department … has been decimated by retirements.”

When the law was written, it was meant to level the playing field and treat all centers equally, but the problem is that there are such stark variations in the buildout and function of the centers, the licensing process is more labor-heavy than the department can handle, Brenycz said.

“Unfortunately, right now, we’ve had a brain drain,” he said.

That means a lack of institutional knowledge, as well as an inability to properly communicate certain changes.

For example, some owners and operators asked why they were cited for certain issues, which were never before seen as life-threatening, to which Brenycz replied that there is more focus on certain procedures, such as infection control, in the department and some of those issues could contribute.

Between these types of changes and the slow pace of application processing, some surgery centers are concerned.

This, Shanton said, is the next step and focus — to push harder for a meeting to resolve the issues.

That effort is undermined by the shakeup at the top of the department as well. Just this month, Commissioner Shereef Elnahal announced he was leaving to lead University Hospital, and Deputy Commissioner Jackie Cornell is leaving for a cannabis company.