Home Opinion Vision for Newark: Mulberry Commons is about so much more than grass,...
Facebook
Twitter
Linkedin 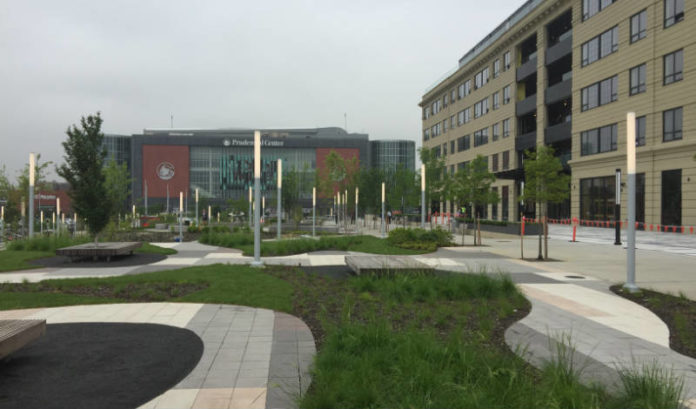 There’s plenty to see in Mulberry Commons, the three-acre park along Mulberry Street and Edison Place in Newark that creates usable open space for the land that sits between the Prudential Center and McCarter Highway and is bordered by the impressive Ironside Newark building, which will soon bring a level of restaurants and retail.

There are fountains coming up from the ground, a park for kids that includes a cool slide, table tennis tables, public restrooms and plenty of seating areas — both in the forms of benches and tables.

It’s easy to see why Newark officials, developers and businesspeople have worked — and fought — for nearly 15 years to get Mulberry Commons done. (Or, at least, the first phase of it.)

But at the ceremonial ribbon-cutting Thursday afternoon, what was clear was that each principal player in the project saw something different.

Mayor Ras Baraka, the man credited for bringing people to the table to get the park done, said one result is obvious.

Baraka joked that he’s not upset that it took 15 years to get it done because of what it will mean for the future.

“The impact that it’s going to have is going to last generations,” he said. “What you see is a park, what you don’t see is all the development that will take place because of this park. You don’t see the residential, the commercial, the restaurants, the retail, all the activity that’s going to take place down here.

“What you also don’t see — what’s in the works now — is a bridge. A bridge that will connect this part of the city to the Ironbound. (This is going to be) a convening of our city to exchange our multicultural values, our culture, our history.

“That’s what I see, when I see Mulberry Commons. I don’t just see grass and trees, I see Newark beginning to see itself as what it can become.”

The park, Boraie said, will enable the essence of Newark to resonate outside of the city limits.

“The thing about Newark is that it never had an identity outside of Newark,” he said. “People inside of Newark know their identity, but, when they go outside of it, they can’t explain what it is.

“That’s why I see the park has nothing to do with grass and trees, it’s about the city’s soul — just showing people what Newark is.”

Of course, as big picture as all that all sounds, there still are some measurable markers of impact.

Jennifer Sage, principal at Sage and Coombe Architects, said the design’s impact on residents will soon be evident.

She was eager to rattle off statistics.

“According to the Centers for Disease Control and Prevention, access to physical activity led to a 25 percent increase in people exercising three or more days a week,” she said.

“Now, multiply that by 150, which is what we have in Mulberry Commons, and you’re able to see the ways this park will improve the lives of the citizens of Newark.”

The impact will go to businesses, too, she said.

“A study by the University of Michigan confirms being outdoors and exercising in nature improves creativity by 50 percent,” she said.

Baraka didn’t need a study. He has lived the city’s history since the day he was born. He understands its reputation — and understands how this park can help change it.

“Yes, we can make money, but we can grow the city at the same time.”

The opening of the park is just phase one of the project. Phase two involves building a foot bridge over the highway and railroad tracks to connect downtown to the Ironbound.

Newark officials estimated it would take three years to complete that phase.