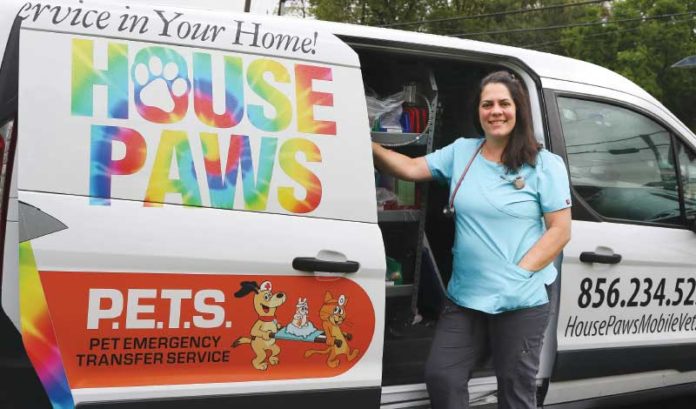 Dr. Lisa Aumiller said that, while she was born to be a veterinarian, her entrepreneurial success was rather accidental.

“Becoming a businesswoman was something I grew into without realizing,” she said.

And, by the end of this year, her business will have $8 million in total sales.

“I started HousePaws after deciding to give myself some personal freedom and the businesswoman in me woke up,” Aumiller said.

Aumiller left traditional practice nearly 13 years into her career as a veterinarian, she said.

“Where I had been working had very strict protocols, but I believe that treatment for every patient should be different and unique — and that philosophy did not sit well with theirs,” she said.

It was her decision not to give a particular vaccine to a pet — and her dedication to her client’s wishes over her employer’s, Aumiller said — that got her fired.

However, having given birth to her third child just six months prior, Aumiller said she needed a plan — and fast.

“I attended a Business Networking International event and told an accountant I needed to start a business within a week because my family and I could not miss a paycheck,” Aumiller said. “Then, I spoke with a lawyer and asked, how quickly can I (incorporate)? Then, I spoke with someone about quickly obtaining business insurance.

“I just walked around the room, handing people scraps of paper with my phone number on them.”

While pressed for time, Aumiller knew she was on her way to bigger and better things, she said.

Having worked in the area for more than a decade, she had clients who knew her; she had a truck and medical tools; she still had a desire to help pets and their people; and she knew how to leverage the power of community — and social media.

“Word of mouth was huge for our growth early on,” Aumiller said.

Aumiller officially created HousePaws in 2010 as a solopreneur.

Today, she and a staff of nearly 90 have three brick-and-mortar hospital locations, in Mount Laurel, Atco and Morrisville, Pennsylvania, which gives HousePaws the ability to service patients in South Jersey, North Jersey and the greater Philadelphia and Bucks County areas in Pennsylvania.

HousePaws’ staff also consists mostly of women, Aumiller said, many of whom are family-oriented and working mothers like herself.

“We welcome women, mothers and children in our offices because we are and always will be a family-run business,” Aumiller said. “And I love being able to pick and choose who I surround myself with.

“When you work for someone, you’re put into a team, whereas, when you are the leader, you get to build one.”

When she first started the business, Aumiller said she anticipated a much greater work-life balance that would allow her to set her own schedule and attend all of her kids’ games.

But the business took on a life of its own — one that her husband and kids thankfully all love, too.

“They are learning skills that many other kids are not — and it also helps teach our kids that their parents are working well together.”

Aumiller said she enjoys working with other working parents, too.

“If you’re working with other moms, they’re probably awake when you are,” she said. “So, it’s not unusual for our team to schedule an 11 p.m. brainstorming meeting.”

Though she always is working, the autonomy has freed her mind to explore greater growth opportunities, Aumiller said.

“With what I am doing now, I have more of an ability to come up with creative ideas and make them happen,” she said. “At a 9 to 5, you’re so focused on your job that you don’t often get that chance to make something big happen.”

For example, while she looks for a veterinarian to take over the territory in Philadelphia, Aumiller said, she also plans to expand HousePaws into Central Jersey this year.

“We’re also working with veterinarians now to help them learn the ropes, so that, if they want to branch out and open their own location, we can help put them there,” she said.

The ultimate goal would be HousePaws in Hawaii, Aumiller said.

“I think people love the concierge-feel of veterinary care at home and I would love to find someone I could partner with to help me grow this into a national brand,” she said.

Lisa Aumiller created HousePaws in 2010. Today, her business is worth nearly $8 million. She gives three tips for entrepreneurs looking to grow their business.

Aumiller said that, while she didn’t have any income coming in when she first founded HousePaws, the first person she hired was a manager.

“Advisers told me it wasn’t the right time to (do that), but if you’re thinking about it, it’s probably past time,” she said. “You can only make money if you see clients — if I was doing all of the office work, I couldn’t grow the business or train employees or market or anything.

“So, I said, ‘OK, how much more would I have to work?’ I would have to see 10 more appointments each week to pay her salary. … Maybe I bit off more than I could chew by doing that, but, without her, it would have taken 10 times longer to grow the business.”

2. Be persistent and vulnerable

A year and a half into business, Aumiller said she was having difficulty obtaining a loan for nearly $800,000 to move into a building to perform procedures.

“We were losing income by renting space at a hospital, since we had so many procedures scheduled,” she said. “But I unsuccessfully went to nearly 10 banks to have them consider my business plan, until, one day, I begged a banker to ride around with me all day so he would see why our business would not lose their money. And he convinced the bank to give us a loan.

“You cannot be above groveling.”

Word of mouth was key to the growth of her business, Aumiller said.

“I always tell my clients, ‘Hey, if you love us and you love what we do, tell 10 people for me,’” she said. “If you ask them, they will make it a priority.

“I feel like a lot of women don’t use the relationships they have simply because they don’t want to ask. But women, especially, love to know that other women are vulnerable and often times just want to help.”