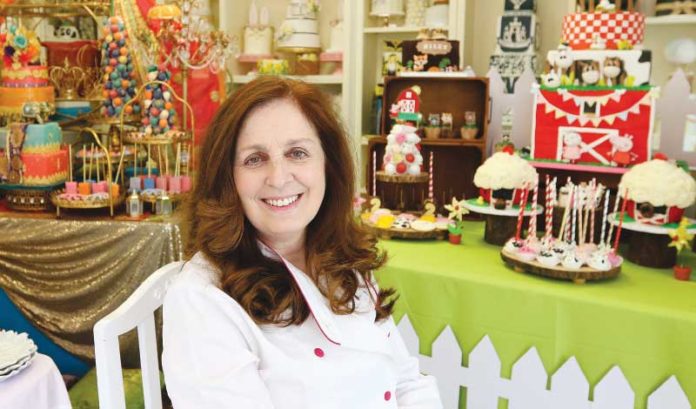 As co-owners of Dessert Ladies in Stirling, Geraldine Keough and her daughter, Lindsay Keogh Smith, knew they needed something to set their business apart.

“We wanted to have a niche market for ourselves,” Keogh said.

The duo started by creating custom cakes (starting at $75), local gifts for small businesses (such as a tasting platter of assorted treats, $37) and custom treats (such as logo cupcakes, $3.50 each).

They found particular success, they said, with handheld, bite-sized desserts.

Especially those made for big clients.

“We always have focused on corporate clients because the market share is bigger and better,” Keogh said.

The duo earned the opportunity to become the official VIP dessert caterer for Super Bowl XLVIII at MetLife Stadium.

That event changed the direction of the company, Keogh said.

“That is when we really took off,” she said.

It’s a niche, she said, that has moved the company’s bottom line, citing the consistent 20% annual growth the business has seen since.

“We bake and bring everything, so that, with one phone call, it’s done,” Keogh said. “You don’t have to get an event planner involved or have your employees source anything. We do it all.

“While your team is going about their daily work, we come in and, from absolutely nothing, create huge displays full of props, decorations and themed desserts so that your staff can then come together later to socialize and celebrate milestones, birthdays, promotions and more.”

Dessert Ladies has worked with corporate clients such as Mercedes-Benz, Marriott, Goldman Sachs and Century 21 as well as with Prudential in Newark and Springpoint Senior Living in Wall Township.

The company hosts, on average, two large-scale dessert bars for more than 300 people per week (which can cost anywhere from $5,000 to $7,000) and nearly 10 smaller events, Keogh said.

“We generally tell people to give us their budget so we can get back to them with the best value,” she said. “There are certain products that are more expensive and involved than others, but we have ways of mixing selections for every budget.”

Dessert Ladies is able to accomplish all this with just nine employees.

“Our company, although small in numbers, is massive in vision and drive,” Keogh Smith said. “What typically takes two to six other companies to accomplish for an event, we do it all ourselves.

“Our work ethic is really unparalleled — we just can’t let any order go out without pushing the creative ceiling a little higher. It’s started to become an addiction to thinking outside of the box.”

Looking forward, Keogh and Keogh Smith plan to continue building out the dessert bar business, while also opening a production center for their Biens Chocolate Centerpieces at the end of this year.

“We’re going into production over the summer now to then begin shipping worldwide,” Keogh said.

Keogh said she believes this new phase of the company will push Dessert Ladies to become a $1 million business next year.

“Our relentless insistence on top quality ingredients and beautiful centerpieces and desserts are sure to be a massive success,” Keogh Smith said.

Geraldine Keogh, co-owner of Dessert Ladies in Stirling, said she was exposed to Goldman Sachs’ 10,000 Small Businesses program while working for the National Football League in 2014.

“While we didn’t quite yet fit the criteria to apply; I kept an eye on it,” she said.

“It opened my eyes to all of the things I did not yet know,” Keogh said.

The programs encouraged participants to look at their businesses very critically to see where they might be able to scale.

For Dessert Ladies, that was its Biens Chocolate Centerpieces, Keogh said.

“We had been selling them individually since 2014, but then people began buying them by the tray, so we developed a local following,” she said. “Then I got creative one day and decided to arrange them with toothpicks on a Styrofoam ball that I had designed to look like a turkey.

“We sold Toby the Turkey at Thanksgiving and everybody loved him as a table centerpiece.”

Keogh said she knew this was the area of business she wanted to focus on. However, the centerpieces would not be able to be shipped as-is.

“We recently partnered with a company to help us create a structure that would allow us to ship them worldwide and we’ve been testing the product for the last eight months now,” she said. “We now have a complete packaging system for these truffle centerpieces, and we are going to launch them at the end of this year.”

Geraldine Keough and her daughter, Lindsay Keogh Smith, both stumbled into their roles as co-owners of the Dessert Ladies in Stirling.

Keogh said that, when she moved to the U.S. from Ireland in 1985 for her husband’s job, she opened day care centers until she retired, despite having a degree in business and marketing.

Then the financial crisis of 2008 hit.

“Friends of mine were trying to make a bit of money making chocolate products, but they weren’t getting very far with it,” Keogh said. “So, I offered to get involved and help them with marketing to try and move the company forward — until both of them dropped out.”

Keogh decided to formalize the business in 2010, one year after her daughter, Keogh Smith, graduated from Fordham University, also with a degree in business and marketing.

“I unfortunately graduated during the peak of the recession, so the job market was horrendous,” Keogh Smith said. “But, as I was helping my mom with a couple of advertisements and creating the brand for the Dessert Ladies, I really got a taste for the creative process and what it was like to be intrenched in the design aspect of a company.

“The ability to help bring a client’s vision to life and then take it up 10 notches just became too addicting to walk away from.”

Lindsay Keogh Smith, co-owner of Dessert Ladies, said she always encourages customers to order at least two weeks — if not a month or two — ahead of an event.

But the tri-state area does not always work that way, she said.

“Even our suburban areas run at an incredibly fast pace, so the ‘I want it an hour before I ask for it’ mentality can create a tough work-life balance,” she said. “You have to constantly be at the top of your game and ready with an answer and solution right away.

“That’s definitely what has made being an entrepreneur and a mom to a toddler and a 6-month-old such a juggling act. But sleep is overrated anyway!”

Geraldine Keogh, co-owner, said the 18-hour days are more than she anticipated.

“I was retired and had been doing a lot of volunteering before this, but, in all honesty, I love what I do and so this never feels like work,” she said. “But is it difficult to run a business in New Jersey? Yes, it is!”

The easy step that will give you up to 5x your...