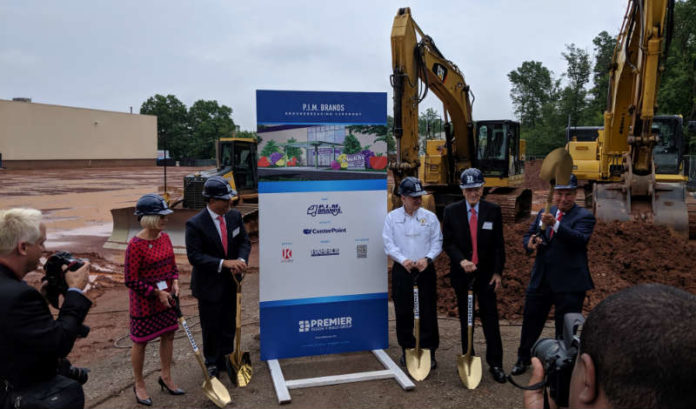 A lot has changed in the world within the last five years, said David Nenner, but one important thing that has not: Americans love fruit snacks.

Nenner, who is senior vice president, regional manager at CenterPoint Properties, was speaking as Promotion in Motion Inc., a food manufacturer based in Allendale, broke ground for an 80,000-square-foot addition to its manufacturing operations.

PIM, best known for Welch’s fruit snacks, partnered with CenterPoint on the project.

A group of about 80 employees, local business leaders and city officials were all in attendance as they stared out at the flooded plot of red dirt that spanned the length of a football field.

“After many studies by our business partnership, we have the proof and the numbers to show that whatever position you want filled, from entry-level to CEO, we can fill it here in Somerset County,” said Somerset County Freeholder Deputy Director Patricia Walsh.

Walsh said the partnership works closely with businesses from small to large, and in conjunction with the county college and vo-tech, to provide the workforce Somerset businesses need.

PIM CEO Michael Rosenberg spoke to ROI-NJ about his experience in attracting and retaining talent in the manufacturing sector over the past few years.

“It has been a challenge, but we’ve hired many local people as well as recruited people from other parts of the country,” Rosenberg told ROI. “If you walked into our factory, you’d find a lot of people from the Midwest and other parts that have moved here to work at our facility because finding the skillsets has been challenging.”

“This is not a blue-collar state, it’s a state of highly educated people,” he said.

Rosenberg said the state needs to think hard about if it wants more manufacturing jobs and how it can partner with business to drive those types of disciplines in schools.

“A factory job is a fantastic thing as a high-paying and dependable job,” he said.

The addition will address the company’s growing business and eventually allow for increased production of the company’s signature fruit snacks and entry into Gummi vitamins and other products. PIM says the additional space will allow for improvements in packaging, warehousing and operations.

“It’s close to my home and our corporate headquarters. The proximity is also fantastic. I love being close to New York, Philadelphia, the local airports and other transportation. I think about one-third of the U.S. population lives within miles of this facility, so it’s easier to attract people for both factory tours and employment,” Rosenberg said.

He said that, if New Jersey wants to attract more businesses, it needs to think about its policies and understand that, in order to be attractive, the state needs to not only be a pleasant place for people to do business but also be more competitive in comparison to other states.

Rosenberg said the company didn’t even own a screwdriver when it first moved in.

“From an empty building to where we are now is pretty remarkable,” he said. “We’re the third-largest privately-owned employer in the food sector in the state; year after year, our company delivers double-digit growth and consumers eat about 100 packs of our product every second.”

Rosenberg said he started the business with $150 out of his college dorm room and, if he had known it would be this successful, he would’ve invested $200. He said he’s opening up the Welch’s fruit snacks factory tour and expecting about a million visitors a year, which he said would be a big boost to the local economy.

Rosenberg, who currently has 800 employees, couldn’t say how many jobs will be added with this new construction.

He said the facility operates 24/7 and will be available for some purposes around October. By next summer, it will be functional as a manufacturing facility and, six to 12 months after that, there will be a ribbon-cutting for the factory tour.