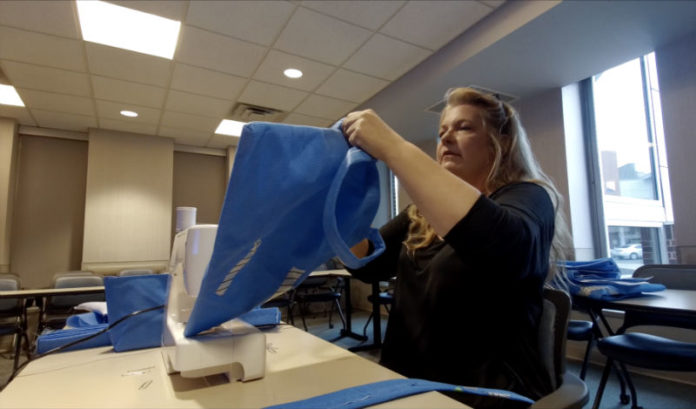 Hospitals today are competing in the innovation space to solve a wide range of operational and clinical problems cost-effectively and in-house.

While that sometimes requires high-tech solutions, the problem of recycling surgical blue wrap has a simple fix that a team at Atlantic Health System recently found.

The wrap is used to help keep surgical tools sterile, and as a result is a single-use product.

Tami Ochs, a behavioral health nurse at Overlook Medical Center, decided to try to solve the problem herself.

“One day, when I was discharging a patient, I (thought), ‘Why don’t I make bags and replace the single use plastic bags we are currently using?’” she said.

Typically, if patients show up in an emergency situation, they don’t have a bag to carry their belongings, Ochs said.

Michael Atanasio, director of food and nutrition, parking and patient transportation at Overlook, said that replacing plastic bags with the blue totes is a cost-saver in multiple ways.

It saves 100,000 plastic bags from being used annually, in addition to saving the blue wrap from ending up in dump sites, he said.

In addition, it removes the cost of dumping the blue wrap.

“If we were to do nothing, it would cost us about 8 to 9 cents per pound, plus the tipping charge to remove the blue wrap,” he said.

The waste is a problem the hospital industry has known about for some time.

“The Nightingale Institute estimated that approximately 19% of the waste stream generated by surgical services is blue sterile wrap,” according to the article.

That is roughly 255 million pounds of waste annually nationwide, according to the EPA.

A number of companies have cropped up over the years to help with the problem — but contracting a vendor would cost the same as the cost of the waste removal, Atanasio said.

So, one day, Ochs began stitching the blue wrap into tote bags.

“I do it in my free time. And I find sewing very relaxing, so I’ll sit and sew for a couple hours.”

But she does have a little bit of help — from behavioral health patients who stay for extended periods of time.

“I’ve also incorporated it into having my patients in my unit helping me with the prep work on the bags,” she said.

“They really enjoy it. They’ve been helping me with the — I don’t use straight pins, I use paper clips on the bags because they are very thick fabric — so the patients will help me with paper clipping, marking them up for handle placement, they help me inside-out the bags when they are done. I try to put a bunch (of the bags) together, so they help a lot like that.

“We go into the dining room and…they love it. We’ll spend two hours in there sometimes, and they’ll help me get organized and they have a really good time.”

Those totes are not only being provided to patients who are leaving the surgery department after a stay, but are now sold in the hospital gift shop for $2.99.

This represents a revenue source and a growth opportunity, but ramping up the output volume is a challenge.

“As we start looking at our business plan and moving this to the next level, the next level is going to include volume, and we are looking to research what resources we have at our disposal,” Atanasio said.

“So, for example, we are looking into local schools. Do they have sewing programs (or clubs)? So, we can take Tami’s template and put Tami at the head of this and increase the production. Because we only have Tami. So, really, the next step for us is, looking at the financials, how can we increase this without adding a significant amount of cost?”

Melissa Bonassisa, a radiology nurse at Overlook, said the idea has blossomed into a much larger project than anyone anticipated.

“We were very naïve when we started requesting having the blue wrap sent to us, what exactly we were getting into,” Bonassisa said.

In terms of weight, the number may not seem impressive because the wrap material is light, but it adds up, she said.

The hospital is currently using 15,000 pounds of blue wrap per year.

In a Facebook post recently, the hospital announced future plans for the blue wrap could include ponchos and sleeping bags for the homeless.