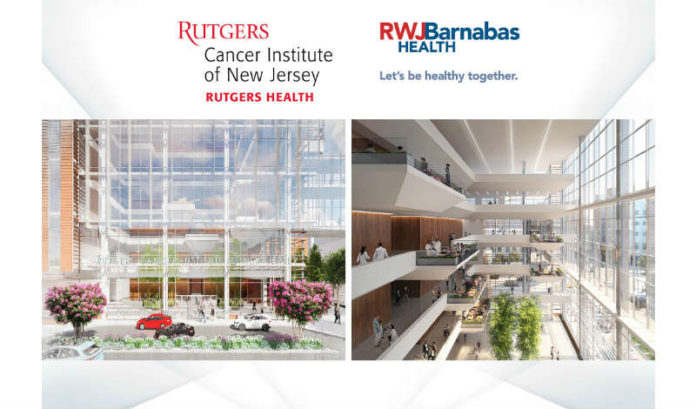 Jack Morris smiled at the thought.

The acquisitions, the mergers, the connections to medical schools and cancer centers — all of the things that helped Barnabas Health transform into RWJBarnabas Health — were not just for show. Or the bottom line.

Morris, the chair of RWJBarnabas Health, said they were being done strategically. And for maximum impact.

The latest example of that came Monday afternoon in New Brunswick, when RWJBarnabas Health and Rutgers Cancer Institute of New Jersey, in partnership with New Brunswick Development Corp., announced the Cancer Pavilion, a state-of-the-art, freestanding facility that those involve feel can change the course of cancer treatment in the state.

“We weren’t doing this just so we could buy gauze pads cheaper,” Morris told ROI-NJ.

No, the building of the system was for the benefit of the state, he said.

“This is where the size pays off,” Morris said. “This was my commitment.

“We weren’t just having mergers so we could say we’re the largest health care system in the state. We had to make a difference. And I think just shows the type of difference that we’re going to make and we’re going to continue to make.”

Barry Ostrowsky, the CEO of RWJBarnabas Health, couldn’t have agreed more. Size, he said, means everything.

“This is the first of many significant projects that we’ll be doing in which we’re investing the resources we’ve accumulated,” he said.

“There was a difficulty. Building this scale, building the unified commitment to do something special, takes a lot of participants. And that’s what we’ve built over time.

“When you have 35,000 employees and over 10,000 clinicians and you’re able to manage those facilities and programs effectively, you’re able to accumulate a level of resources. Applying those resources to something special is what we’re doing.”

And that impact, he said, is not just about RWJBarnabas Health.

“Our service area contains 5 million people, not all of whom rely on us for health care,” he said. “But, when you think about it, the more those 5 million people rely on us, the stronger we get in social programs, which is a passion of mine, and the clinical programs.

“And, in order to attract their trust and reliance, you have to have state-of-the-art programs and state-of-the-art facilities, all of which is really made possible by the size and scale of this organization.”

The facility is years away from opening, but its impact is being felt today, Ostrowsky said.

“We’re already getting calls from researchers around the country,” he said. “The reason we made this announcement is because this is a clear, tangible indication to scientists that are looking for a place to do more research, to be connected to a big system.

The facility, Ostrowsky said, is a key.

And that will help Morris and Ostrowsky achieve their primary goal of social responsibility.

“We want to make sure that the people in New Jersey have the best care and that they don’t feel they have to go elsewhere,” Morris said. “I’m proud to be a New Jerseyan. I think this is going to show people what we can do in New Jersey as far as health care is concerned.

“We will show people here at RWJBarnabas the type of social responsibility that a health care system should have. And you’ll start seeing it. There’ll be a difference. And that’s what we have to do.

That’s as important as the volumes of procedures, Ostrowsky said.

“Ultimately, and I’ve always meant this sincerely, I’d like our success to be adjudicated by how we’ve impacted the community,” he said. “Is that by doing more ultrasounds or is that by keeping people healthy?”