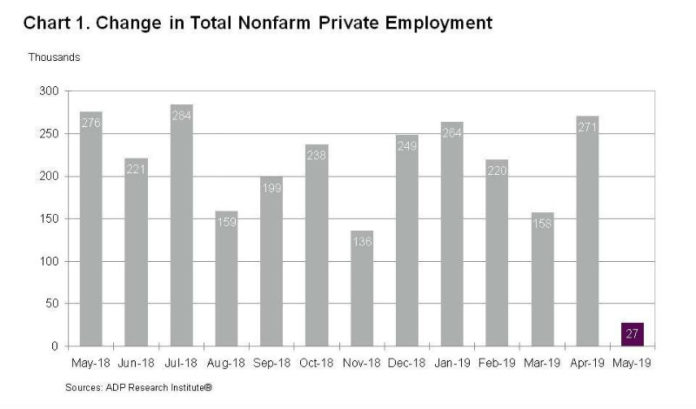 The nation’s private sector employment figure increased by 27,000 jobs in May, according to the latest report by Roseland-based ADP.

The payroll and human services company said in its monthly ADP National Employment Report that total nonfarm private employment rose from April to May.

“Following an overly strong April, May marked the smallest gain since the expansion began,” said Ahu Yildirmaz, vice president and co-head of the ADP Research Institute. “Large companies continue to remain strong as they are better equipped to compete for labor in a tight labor market.”

In terms of different sized companies, large businesses with 500 or more employees dominated the month, adding 68,000 jobs, while medium-sized businesses of 50-499 workers added 11,000 positions and small businesses of under 50 workers lost 52,000 jobs.

In the services sector, the education and health services industry added the most jobs, reporting 33,000 new positions; professional and business services saw a growth of 22,000 new positions; leisure and hospitality added 16,000; and financial activities added 13,000. The trade/transportation/utilities industry showed no change. Only two industries experienced job losses in this sector, including other services, which lost 9,000 positions, and information, which lost 3,000.

In the goods-producing sector, all three industries saw job losses. The construction industry lost the most with 36,000 jobs. Natural resources and mining lost 4,000 while manufacturing lost 3,000.

ACG announces 5 N.J. companies to be honored at annual Corporate...