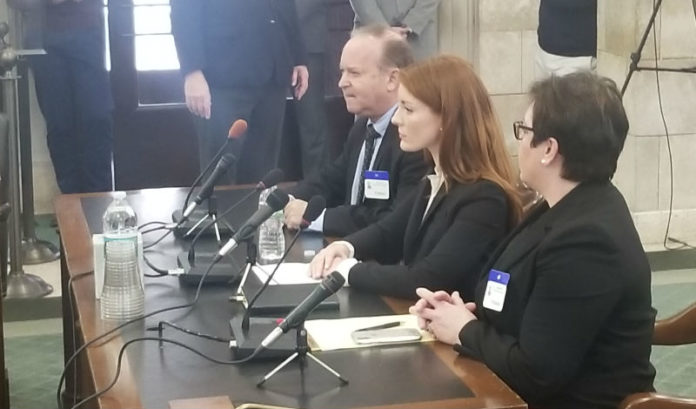 A report from a joint legislative committee tasked with looking into the hiring of a former staffer in Gov. Phil Murphy’s administration who was accused of rape has concluded the governor’s transition team did not do enough to address the situation.

An investigation into the allegations should have been conducted before Al Alvarez was hired by the state Schools Development Authority, according to the report.

“There should have been an investigation before decisions were made about hiring Mr. Alvarez and what to do about Mr. Alvarez and Ms. (Katie) Brennan’s complaint,” the report said.

The report said those involved did not respond appropriately.

“While the lack of contemporaneous notes is itself an issue that needs to be addressed, perhaps of greater concern is that this lack of documentation seems to be the result of either a shocking lack of recognition of the seriousness of the allegation or a desire not to have a factual record of the precise details of what transpired,” the report said.

The report listed, by name, several people it found at fault, and made recommendations for the future, but the authors did not have the authority to recommend whether anyone at fault should be disciplined or fired.

The problem stemmed from allegations by Brennan, a volunteer on Murphy’s campaign who is now chief of staff at the state Housing and Mortgage Finance Authority. Brennan and Alvarez worked together during the campaign.

Brennan alleges Alvarez raped her after a non-campaign-related event. Alvarez has denied the incident and said he and Brennan were in a consensual relationship.

Two county prosecutors, in Hudson and Middlesex counties, reviewed the case but did file charges.

The case remains relevant because it delves into how people are hired by the state.

The questions surrounding how Alvarez was hired at the SDA, in addition to how Murphy’s transition team handled his hiring, has been viewed as a test of labor and employment law for the state.

The committee was tasked with determining how to craft stronger protections for state employees — including applicants and campaign staffers and volunteers — in order to avoid a similar issue in the future.

Brennan’s story was first published in an article in the Wall Street Journal last October. Brennan testified in front of the legislative committee late last year. Alvarez resigned from his post at the SDA shortly before the story was published and did not speak publicly until after the hearings were over.

Whether or not Alvarez should have been hired, and whether or not a “boys club” protected him during the transition, was at the crux of the legislative hearings.

Testimony from several witnesses — including the transition counsel, director, Murphy’s chief counsel and the former SDA director — indicated that many were aware of the accusations against Alvarez. They said it was a confidentiality issue and did not address it with Alvarez, nor did they inform the governor.

Brennan tried to reach out to the governor to inform him, and he responded that his team was on it, but Murphy has said he did not know what she was referring to.

The report Wednesday concluded this was mishandled.

“There was no legal bar to informing the governor and, as the leader of the organization, he should have been informed,” the report said.

“As made clear by the testimony of professor Charles Sullivan, when a high-level applicant or employee is accused of rape, multiple individuals have a ‘legitimate need to know.’ ‘(T)here are people within any organization who have a need to know this kind of conduct is going on; and if there is such a need to know, confidentiality doesn’t bar that.’”

Because neither Brennan nor Alvarez were state employees at the time, and their fates in the administration were not known at the time, witnesses said it was easier to conclude in hindsight that more should have been done.

The report concludes the following changes need to be made to state law to prevent a similar conflict from ever occurring again: