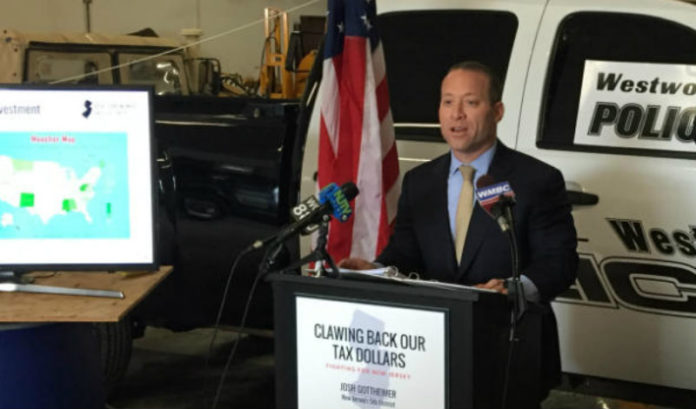 It’s easy to hear the frustration.

“It seems to me that we’re literally trying to go out of our way to keep jobs from coming here,” Josh Gottheimer said. “I don’t know why we’re doing that, but we’ve got to deal with it.”

Gottheimer, a Democrat in his second term in the House from the state’s 5th District, is continuing his pledge to be pro-business when it comes to being pro-New Jersey.

He said the state’s future depends on it.

“I think it’s what is affecting our ability to draw and keep millennials and our ability to grow and draw new businesses, versus losing businesses,” he told ROI-NJ. “We were the No. 1 outmigration state in the country last year and that’s not a good sign. That is a problem. It’s a legacy problem and we’ve got to do something about it.

“The bottom line is, between cutting red tape and making sure we reinstate (the state and local tax deduction) and clawing back more and get our infrastructure fixed, there are things we can do if we work together and not play partisan games, which we seem to do nationally, and in the state of New Jersey, way too much.”

The hallmark of Gottheimer’s efforts are his push for the state to claw back more of the money it sends to Washington, D.C., in the form of government grants and products, including vehicles.

It’s a result of hard work; he has a staffer devoted to the efforts full-time. And a growing understanding of how these programs — where towns can get emergency vehicles and first responder tools essentially for free — work.

“It takes time,” he said. “You have to educate the towns. We’ve done dozens of these grant workshops with our towns and fire departments, first responders and police. That’s what I did my first year. We spent a lot of time on that. And it’s paying off.”

Gottheimer points out there are 27 towns in his district that participated in the clawback effort for the first time. Many did so in one of the more popular programs, LESO grants (Law Enforcement Support Office).

“The more resources we get back from the government, the more local tax dollars can go elsewhere,” he said. “These grant dollars are going to get spent. Someone is going to get the fire truck equipment or the police grant. The key is making sure that we do. It takes real teamwork and that’s what’s been going on.

“This impacts small business, because it saves money in town budgets while making communities safer and stronger.”

Gotthemier said his success in clawbacks is enabling him to spend time on two other big issues: infrastructure and red tape.

While the Gateway Tunnel project is at the top of the list of every elected official in the region — “I’ve introduced legislation called the Doomsday Prevention Act, which is asking the administration, ‘What is your strategy here? What is your plan?’” — Gottheimer is focusing on local issues, too.

“We’ve got the eighth-worst roads in the country overall,” he said. “One of the things I think we should review are the formulas for what resources go back to the states.

“Right now, they’re based on antiquated formulas that are not necessarily responsive to the current situation with infrastructure. You’ve got a lot of other states that I think are receiving far more than we do, given what we pay in and given our need. That should be studied.

“And I think we should be getting more resources back for our bridges, too.”

But that’s only if businesses can open here.

“I’m always hearing about red tape,” he said. “Doing business in Jersey, whether you’re a builder or someone trying to bring a business in or just trying to put up a sign, is brutal. Everything has so much bureaucracy.

“Now, we want guidelines and guardrails to make sure that we protect our air and our water and do and do the right things, but we don’t need 12 people doing everything and recertifying everything.”

It’s why Gottheimer is doing an event next week on how one of his towns, Paramus, is doing a great job at cutting red tape.

“They’ve done a phenomenal job with helping businesses get going faster without trying to just kill them with red tape and bureaucracy,” he said. “We need the state and more towns looking to put out signals that say, ‘Come here and do business.’

“It’s very frustrating for business owners. They all tell me the same thing: How difficult it is to do business in New Jersey.

“We just have to get better.”

With that, his frustration surfaces again. But, so does his desire to impact change.

“We’re making progress,” he said. “It’s just going slow. But we’re not going to stop working at it.”

Why business (and academic) community cheered hiring of Schiano at Rutgers

Casting a vote for all votes being cast on Election Day