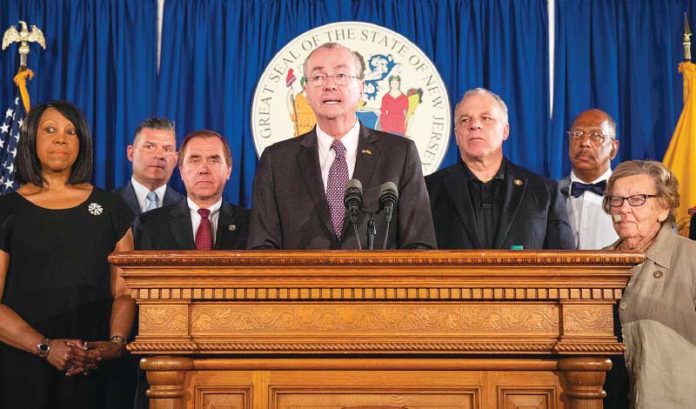 When Gov. Phil Murphy unveils the latest drafts of his tax incentive proposals Wednesday afternoon, they will include a number of benefits for unions and union workers.

A senior administration official, who requested anonymity because no one is authorized to speak on the proposals publicly until they are announced, told ROI-NJ the latest proposals include stronger language to support labor unions, and have enhanced language for larger real estate deals.

The official said that includes protections for prevailing wages for construction workers, as well as janitors and custodial workers, and a $15 minimum wage for warehouse workers for any company that receives certain tax incentives.

The enhancements came after the governor’s team met with key stakeholders, including several unions, in an effort to make the incentives more palatable.

The proposals come during a tricky time during the legislative process.

The current EDA incentives are set to expire June 30. So, any replacements must be passed before then.

That date, of course, is when the state must pass a state budget — meaning any new incentive programs almost certainly will be included in the budget negotiations.

Murphy, while battling against the current incentive programs, repeatedly has said incentives are part of his economic vision.

“A robust tax incentive program is a necessary tool in any economic development toolbox,” he said in a statement Tuesday. “The plan that I have proposed will not only help us attract the large companies that provide jobs for our residents and boost our economy, but will also support small businesses, startups, incubators and coworking spaces as we seek to grow our economy for the long-term.

“This plan will not only help businesses looking to call our state home, but it will also help our communities and the people who live there.”

Murphy’s incentive proposals figure to have a number of changes. He already has expressed a desire to include incentive caps and he outlined a focus on a variety of sectors and company sizes in his economic vision last October.

The business community’s appetite for incentives continues remains to be seen.

The governor’s announcement Wednesday comes a day before the governor’s EDA incentives task force meets for its third hearing to investigate the implementation of existing incentives.

In the previous hearing, companies that moved to Camden, all of which have ties to South Jersey insurance broker and power boss George Norcross, came under fire.

A lawsuit was subsequently filed by Norcross, naming Murphy and the task force, calling for the task force to be deemed illegal and powerless.

The task force has made a criminal referral of unregistered lobbying, and a grand jury has subpoenaed several companies in Camden and Jersey City.

An article from WNYC on Tuesday also reported incentives for Camden-based Holtec have been put on hold as officials further investigate its incentive award.

Investors Bank to be acquired by Citizens in $3.5B deal