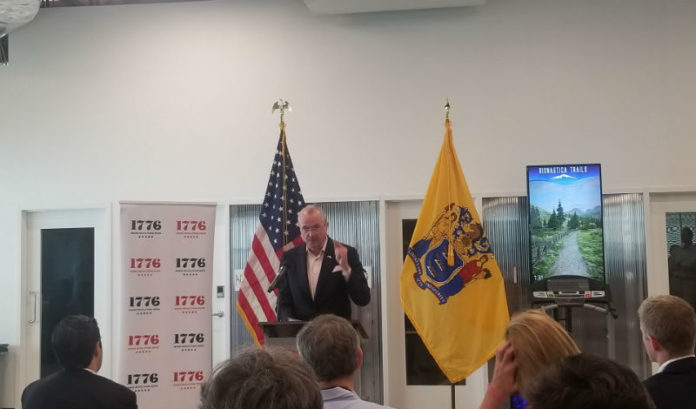 With less than a month left until existing state tax incentives expire, Gov. Phil Murphy pushed for adoption of his proposed replacement incentives — inclusive of more stringent rules and greater accountability for their utilization.

Murphy, speaking Wednesday in Cherry Hill at the 1776 workspace, reiterated his desire to have incentives — but he also reiterated that he has no intention of extending the existing tax incentives while he and legislative leaders work out legislation that would need to be passed by June 30.

“I will not unilaterally disarm our economic development while our competitor states are luring businesses, in part, through incentives,” he said. “However, I will not simply renew a set of incentive programs when serious questions exist about whether they have been successful in spurring broad-based economic activity in our communities, or even if their most basic promises have been met.

“Yes, business tax incentives must be a part of a smartly designed and strategically deployed economic program. But the operative word is that sentence is, ‘part.’”

Murphy said the current programs were not effective in boosting the economy and were leaned on too heavily by the prior administration.

“Instead of a toolbox of various and complementary programs, we had consistently pulled out only one blunt object,” he said.

The comment highlights an ongoing battle that is taking place in the background — where Murphy is locked in an intraparty political battle with South Jersey political power boss George Norcross and his ties to companies that moved to Camden.

“This is not about one city, one company or one person,” Murphy said.

“The simple fact remains that, while we were handing out incentives to the tune of roughly $11 billion in total obligations, and at per-job award amounts multiple times that of our competitor states, those incentives were returning minimal overall economic benefits. This fact is not up for debate.

“From 2010 through 2018, New Jersey paid five times more than our peer states for every job created or retained, yet attracted five times less capital investment per incentive dollar. Neither are these facts. Under our current programs, New Jersey continued to lag at No. 42 in job growth and No. 49 in wage growth in the nation. Forty-second and forty-ninth — out of 50.”

In his proposals, Murphy included five incentives which he first unveiled in his economic vision last October.

“This suite of five programs is how we can provide the economic incentives we will need to direct real and sustainable growth to where it will do the most good — places like Camden, Bridgeton, Vineland and Atlantic City, along with Newark, Paterson, Trenton and every community where we can be helpful — all the while protecting our ability to make critical investments through the state budget in education and infrastructure, to name just two, in these same communities,” he said.

“And, to those who question whether we can afford $50 million a year in carefully vetted startup investments, I ask, in return, how that fares against billions of dollars in tax breaks whose impact is up for debate.

“After all, economic growth can’t just be about helping a select few and the politically connected, but about offering a helping hand to the new ideas being brought to market right here, at 1776, and reigniting New Jersey’s startup culture.”