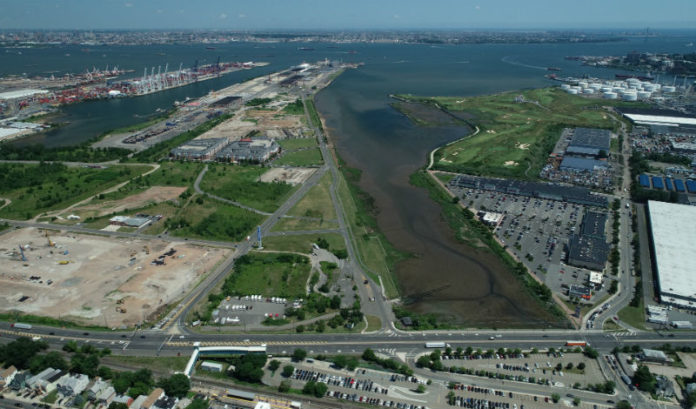 The announcement was made to more than 100 brokers taking a maritime tour of the Bayonne peninsula that will house the facility, LEG said.

On the tour, LEG President Joel Bergstein also announced that vertical construction at the redevelopment site — the site of the former Military Ocean Terminal at Bayonne — will begin next year.

The site, LEG said, has approval for up to four buildings between 150,000 and 477,000 square feet, or a single 1.1 million-square-foot facility with 40-foot ceilings, trucking lanes and employee parking.

“This development is a perfect example of the City of Bayonne, the Port Authority of New York and New Jersey and private business pulling together to get the project done,” Bergstein said aboard the Cornucopia Destiny on Wednesday. “We’re just 7 miles from Newark and 8 miles from the Holland Tunnel. We’re essentially the ‘sixth borough,’ and this will be a prime distribution point for the city.”

At the event, Bayonne Mayor James Davis praised the work being done to bring thousands of jobs to the city, LEG said.

The site offers 62.9 acres of riparian rights, a 1,700-foot wharf, maritime access to the Hudson River and the Newark Bay as well as direct access to the New Jersey Turnpike, Interstate 78, routes 448, 1 and 9, and the GCT.

LEG said it acquired the site in June 2018 and oversaw demolition of its 70-year-old structures and foundations. The company said it is also complying with post-Hurricane Sandy standards and will raise elevation of the site by 6 feet.