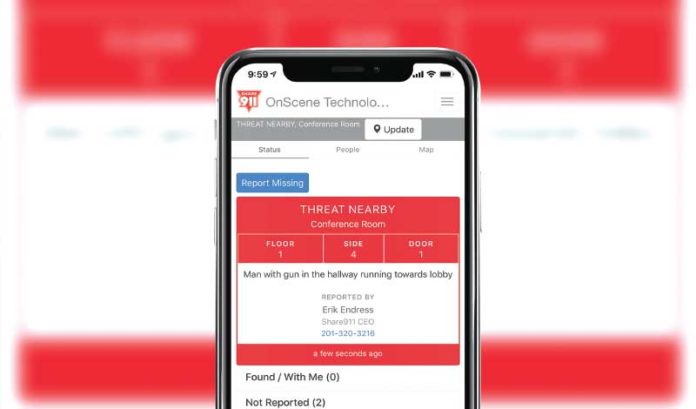 Fewer and fewer people doubt that cybercriminals can devastate their computer systems, so … investing in the right technology protections? Why not?

The same sentiment, however, isn’t extended to a much more tangible threat, and one much more dangerous: active shooter situations.

Entrepreneur Erik Endress said it’s not just that organizations haven’t prepared adequately enough — many haven’t considered it at all.

“They can’t even imagine the idea they’ll ever be in this situation,” he said. “But we’re seeing a shift in the mindset after something like (the) Sandy Hook or Parkland (school shootings), because people started to realize it can happen in any community in America.”

Endress is founder and CEO of OnScene Technologies Inc., which ties together different aspects of active shooter preparedness in both corporate environments and schools.

The unique business guides organizations through what to do in the all-important first few minutes of an incident all the way through to crisis counseling and reunification of people with their families.

“And as you can imagine, even that’s a very, very stressful situation, in particular for the families, because they know their loved one has gone through this incident,” he said.

Endress comes from a background that’s a blend of technology and emergency services. He was a longtime volunteer first responder with the Ramsey Rescue Squad, serving the borough his company is based in today.

Raymond Bailey, chief operating officer of OnScene Technologies, spent more than 25 years in law enforcement with the Ramsey Police Department. Endress and Raymond came up with the idea for a company that could better relay on-scene information in active shooter situations after identifying some of the problems first responders would encounter.

“What we saw as first responders was at a school, for example, the people in that facility during some type of emergency — in order to reach first responders — all had to call 911,” he said. “That’s not a system that scales well. In Ramsey, for example, there’s one dispatcher and three phone lines and, yet, in buildings, they have hundreds or thousands of occupants needing to communicate.”

Activate shooter situations tend to start, and end, quickly. But Endress said the time between someone first seeing a shooter approaching a building and first responders being notified through the typical channels — calling 911 — hasn’t been so quick.

“Meanwhile, there are people right there, very close to the gunman, who have no idea they’re in danger,” he said. “We believe that’s why there’s such high casualty counts often. People on the scene don’t know the shooter is there. They’re in close proximity. And then we see the tragic results in Sandy Hook and Parkland and what seems to be countless other such incidents.”

The company was launched at the behest of school district administrators several weeks after 2012’s Sandy Hook shooting, in which a gunman killed 26 teachers and children at an elementary school in Newtown, Connecticut, Endress said. In 2013, the startup started to work with 10 school districts in New Jersey and had law enforcement partners throughout the state.

“By the end of that year, we knew we were on to something,” he said. “Six years later, our platform has been adopted by thousands of schools and workplaces across the country.”

The company’s largest density of customers is around Northern California, in school districts such as the one in Stockton, California — where, coincidentally or not, the country’s first mass school shooting happened when five schoolchildren were killed and 32 others wounded on a playground in 1989.

Regardless of its nationwide presence, its base remains in New Jersey, a fact Endress is proud of.

“This sort of company is only supposed to happen in Silicon Valley or New York City,” he said. “I thought it was important to show that you can do amazing things with software wherever you live. In Ramsey, we’re probably one of the few tech startups here.”

Share911, the company’s tech-driven emergency management platform, operates in a browser or desktop application as well as on mobile devices. What’s useful about it, Endress explained, is that as employees report where the danger is and that information updates in real time.

“That means you’re not hitting refresh on your browser … as people change their status, you’re seeing that information live,” he added. “It operates similar to the navigation app Waze, in that you’re driving along and it pops up and says there’s an accident ahead and you can make decision based on that. That technology is relatively new, and we were one of the first to use it.”

The tech side of what the company does is getting even more interesting with the advent of artificial intelligence and smart camera equipment that can identify danger before anyone would otherwise see it coming.

“An example of that would be license plate reader systems,” he said. “School districts and employers are doing this. They have these systems at their entrances, so that, if they fired an employee Thursday and that employee comes back next Tuesday to seek revenge, they’ve got that employee’s license plate in the system that can be flagged and then can notify everybody.”

All these tools are still new, and there isn’t widespread awareness among companies and school districts about it.

“But, once they learn about our software, either because a neighboring district or business uses it, generally the adoption rate is quite high,” Endress said. “They realize we’re solving what we call white space of the first five to six minutes of the most serious incident. It’s important to prepare for that.”

Gonzalez sells InCharged, Vendx to IBrands Global — and will join...