Home Opinion Hometown play: Why Robinson is going to bat for South Side of...
Facebook
Twitter
Linkedin 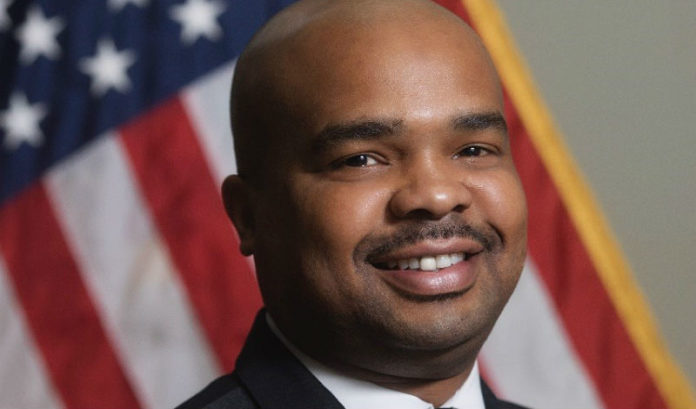 Jermaine Robinson has been the Ward F council representative in Jersey City since January 2017. His roots go deeper.

He has lived there his entire life, marking the third generation of his family to do so.

So, when he says his greatest challenge as a councilman is to make sure the voices in his community are heard, it’s personal.

And when he tells developers his ward needs more attention, that’s personal, too.

“Now that the development is moving closer to the side where I represent, the South Side, there is a little bit more that we can do. What I’d really like to see is that we have a strong return on investment when it comes to the community for any developer that’s coming in.

That activism was on display at a recent public meeting, when more than 50 residents of the area Robinson represents met with representatives from the Manhattan Building Co., which displayed renderings for the Bates Street Redevelopment area, which runs alongside the New Jersey Turnpike Extension heading toward the Holland Tunnel.

Robinson’s biggest concern was making sure the development would not serve as a physical barrier that separates Jersey City into two distinct areas — or a tale of two cities, as he said.

This will be done, Robinson said, by making sure all developers have a community reinvestment plan.

“My plan is to make sure that we have affordability and that’s with all levels of income,” he said. “The low income, the moderate income and also the workforce income.

“We really have to think about the police officers and the schoolteachers who start at $34,000 and will be priced out of the community if we don’t look at affordability. So, this is not just about the low-income individuals, this is more about the workers that we have here in the city so that they will be able to stay in.”

“We have to make sure that we invest in the people,” he said. “That means refurbishing parks, it means building schools.

“One of the biggest complaints I get is that there is nothing to do. That’s basically the reason the crime is a lot higher on the south side of the city.”

Robinson made it clear that he’s not demanding the developers do it all.

“We have to do our part as a city,” he said. “If that includes (tax incentives and abatements), that’s our part, because these are our residents. We want them to stay here, and so it is a shared responsibility. Look at the rents going here in Jersey City right now. Look at three-bedroom apartments going for $4,500. I don’t see that happening anywhere around the state.”

That’s why Robinson is convinced developers will not be scared away by his requests.

Robinson said he’s not sounding an alarm. Not yet.

This is a long-term play. Something he’s familiar with considering his history in the town.

But he doesn’t want history to repeat itself. He felt the city didn’t get enough when it rebuilt the Gold Coast.

That’s why he’s speaking up now.

“When it comes to the South Side of the city where I grew up, there’s an idea that developers are going to come invest in their building and disappear,” he said. “I think there’s more than can be done and I’m going to make sure that I push the mayor and I push the council and I push all of the other people around them to make sure that they’re in tune with me when it comes to that.

“I think we’re the best midsized city in the country and I want it to stay that way.”

Cabinet’s diversity is good — if power comes with it

ConnectOne’s Sorrentino sees bright future — if businesses are willing to...