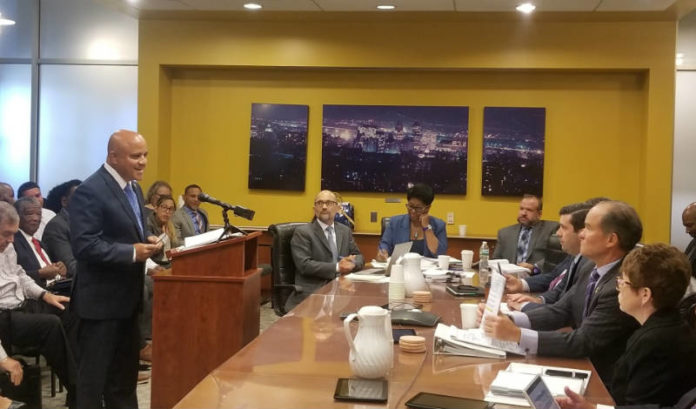 The crowd included significant representation from Camden officials, business leaders and community and religious leaders during the public comment period.

Mayor Frank Moran was among those in attendance. He spoke to the board about the improvements the city has seen as a result of the 2013 Economic Opportunity Act, which is under scrutiny by a task force appointed by Gov. Phil Murphy.

“The last four decades has been nothing but an exodus … and, along with that, went jobs and able residents, who left us to fend for ourselves,” Moran said.

“(The city council) came up with creative ideas on how to stimulate the economy, but, because of the brand we had as the most dangerous city … we couldn’t bring that needed shot in the arm.”

But, Moran said, the city is still a work in progress and needs the ongoing support of the EDA to continue its growth.

“Because of the actions of this board, Camden is making a comeback,” he said.

And so it went during the 60-minute public hearing period.

Other Camden officials and representatives highlighted the changes the city has seen, including an improvement in safety, growth in companies and improvement in high school test and graduation rates.

North Camden Little League President Bryan Morton thanked EDA board Chair Kevin Quinn for taking a tour of Camden recently, and said the city is scared by the news of the task force probe and legal battle being fought over incentives provided to the city.

Another said the city’s residents are afraid that the hope that has been ignited in the city with the growth of companies big and small will be quashed before Camden has a chance to fully recover and develop.

“There is no other urban renewal story happening in the United States right now like the one happening in Camden city — I thank you for that,” he said.

“I hope this agency doesn’t get caught in the political crosswinds.”

Quinn was thanked by many for his first official visit to Camden this month. He was invited back by many of the speakers.