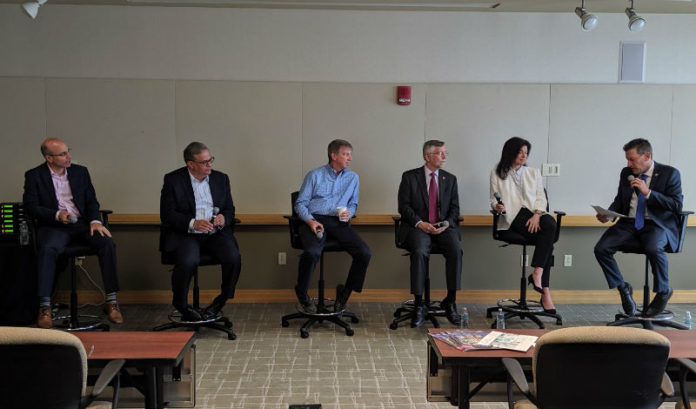 New Jersey needs centers of innovation, technology and venture capitalism to compete with other states, panelists at the Venture Funding in the New Jersey Economy event said Wednesday at the Heldrich Hotel in New Brunswick.

The event was sponsored by the New Brunswick Development Corp., better known as Devco, which currently is developing The Hub in New Brunswick to serve as such a space.

“Kendall Square (in Boston) is populated and I think New Jersey has this sort of inferiority complex,” he said. “MIT has been in the game buying properties since the ’80s.”

Paladino said some of the smartest people in the world go to Boston, possibly drawn by the esteemed educational institutions, but that they stay there because they enjoy the vibrancy of Kendall Square.

Others on stage agreed, but said New Brunswick should just be the start.

Assemblyman Andrew Zwicker (D-Monmouth Junction), who serves as the head of the Plasma Physics Laboratory at Princeton University, said the geography of the state is key.

“We focus on hubs,” he said. “New Brunswick is leading that effort and you have Newark, Camden, Atlantic City, Hoboken and Jersey City. Maybe we should consider a series of hubs, because we’re suburban.

“Are we missing out? New Jersey is unique because our communities are spread out.”

Tech Council Ventures Managing Partner Stephen Socolof said there can’t just be one hub in the state, because the state will find greater success if all parties share and collaborate with one another, rather than be in competition.

“There’s no Sandhill Road in New Jersey like there is in Silicon Valley, where you go down a street and see every top-tier company,” he said. “With New Jersey, there’s more geography to navigate and the state’s diversity is something to be celebrated about here.”

Zwicker, who served as the moderator, asked what the state could do, through legislation and government action, to improve the venture capital and startup communities here.

He asked the panel: “What’s stopping us? What is stopping New Jersey from going in and doing public-private partnerships because the ROI is so great?”

Gina Tedesco, a board member of Jumpstart New Jersey Angel Network, had a simple response: Educate the ecosystem.

“It’s educating people and not being afraid to fail,” she said. “Sometimes, we try to do everything, and we can’t do everything, so let’s focus on a few things where we can have some results, educate people and raise awareness.

“Corporate is the most important element, because what we’re looking for at the bottom of the stream is how we’re exiting at the end of the stream. We need to have each of the pieces in mind to educate the entire ecosystem and have representatives on each of the players.”

David Kimball, vice president for innovation and research commercialization at Rutgers University, said the state should be supporting technological inventions, setting up a fund with a few million to invest in the real startups with real ideas that have an ability and a business plan.

Kimball estimated that, nine out of 10 times, it won’t work, and the startup will fail. He’s hoping, however, that the one of 10 would be a major success.

Tedesco said the time is right.

She related this slowdown in innovation and in the startup community to the previous state of the economy, but she said she’s confident about where we’re headed.

“In 2007, we had a lot of students who were excited about starting a business, and then the recession hit,” she said. “Now, we’re not in a recession. And we’re seeing less people start companies, but that’s not a bad thing in and of itself, because we’re seeing higher quality companies being started and hopefully those higher quality of companies will have access to the capital they need.”

That’s how New Jersey will convince those companies to stay in the state, Tedesco said, with the necessary capital along with the tax credits and incentives.

Also on the panel were James Barrood, the CEO and president of the New Jersey Tech Council, and Jay Bhatti, partner with BrandProject LP.