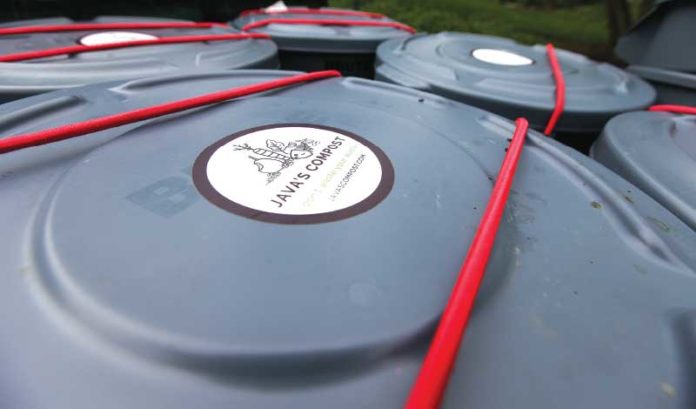 As a busy mother of three, Michelle Bradley said she was a skeptic.

“I was very resistant to the idea of composting,” she said. “I was fearful of rodents, insects, smells — and I was just not understanding how solid food could turn into soil.”

It was her husband, Java Bradley, and the documentary, “Dirt! The Movie,” she said, that changed her mind.

“I realized if we don’t change the way we farm, consume and dispose of food, we are no longer going to have nutritious food to eat,” Bradley said. “I felt a personal responsibility to never throw my food in the trash again.

“And, I thought, if I could make the transition, there must be others like me.”

Bradley said she and her husband decided to co-found Java’s Compost in West Orange, a startup devoted to the transformation of solid food scraps into nutrient-rich, soil-like fertilizer, nearly three years ago.

While their entrepreneurial journey has not been easy, Bradley said, it has been rewarding enough to continue to want to act.

“We want to demystify all the negative associations, because, if you learn the proper way, you should not run into any issues,” she said. “We are trying to reframe the conversation.”

It was Java Bradley’s work in education for nearly two decades that introduced them both to the world of composting, Michelle Bradley said.

“Java was working at a charter school in Newark that had an environmental and sustainability component to its curriculum, having built a rooftop garden where they would grow and serve their own food in the cafeteria,” she said. “The school had the teachers spend time in the garden with their students, but, at one point, they realized they also needed someone to manage the compost system, and Java volunteered.”

That snowballed into the pursuit of a deeper understanding of food as a renewable resource and a passion for composting, with Java Bradley becoming certified as a compost operator at Rutgers University.

Then, Michelle Bradley, whose background was in social work, also jumped on board.

“The idea was to try to get our neighbors involved,” she said. “We originally planned to collect food scraps from people’s homes to bring to our community garden.

“But, then, we learned you can’t actually do that in New Jersey. There are regulations.”

They discovered that just one facility, in Andover, has a composting license to deal with food waste in the state, she said.

“But they deal with large-scale producers, so to work with a small residential startup wouldn’t make sense for them,” she said. “At this point, though, I was totally sold on the idea of composting. I said we had to figure out a way to be able to share this with everyone.

Bradley said she and her husband started simply, by helping their neighbors compost food in their own backyards.

“We would set them up with a tumbler, teach them how to compost, and, if they didn’t feel like doing it themselves, we’d go to their homes each week to process the food waste for them on their own property,” she said.

In addition to tumblers ranging from $349 to $869 and accessories such as countertop containers costing nearly $20, Bradley said she and Java charge between $60 and $150 for assembly and $85 for each consultation.

Nearly 100 people have worked with Java’s Compost to learn how to compost, while more than a dozen have opted for the backyard composting service at $27 per week.

“However, we are phasing that service out due to it being time-consuming for us,” Bradley said.

It already has nearly 50 customers.

“You get a bucket, you fill it with food waste, and we pick it up each week to haul and process it with Community Compost Company in New Paltz, New York,” she said.

That is the part of their business that Michelle Bradley said she hopes can become her family’s full-time work, with Java Bradley currently supplementing income with organic landscaping and her currently working as a virtual assistant.

“I would like to be known as the simple and easy way to compost 100 percent of your food scraps,” Bradley said. 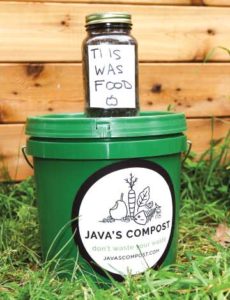 Today, Java’s Compost is mainly focused on its work in Essex County.

“Our food gets burned in an incinerator in Newark, so in that city and in surrounding communities, many residents are unhappy with that, as it is questionable as to whether regulations concerning air quality and pollution are actually followed,” Bradley said.

That is why Bradley said she and her husband hope to quickly expand their business.

“We highly encourage people to visit our website and add their town so that we can more easily come into their communities,” she said. “Expanding anywhere and everywhere across the state would be so great.”

Michelle and Java Bradley, co-owners of Java’s Compost, also are founding members of the New Jersey Composting Council, to provide further advocacy and education on composting in the U.S.

“We work with environmental attorneys at Riker Danzig Scherer Hyland & Perretti to help change state regulations that will allow small-scale processors to compost without falling under a larger category for an industrialized facility, which can carry with it more than $150,000 in permitting and licensing fees,” Michelle Bradley said.

In the future, she added, Java’s Compost would like to open a community composting site that would allow food scraps to be kept local.

“We also would host group sessions to promote education and research,” Bradley said.

What is composting — and why should you do it?

At least a third of all waste is compostable, according to Java’s Compost, with fruits, vegetables, meats – even items such as used tea bags, junk mail, brown paper shopping bags and egg cartons – able to be utilized.

To compost, food scraps are combined with wet and dry material in a closed-bin tumbler for six to eight weeks to create nutrient-rich organic fertilizer.

A year of composting can yield over 600 pounds of finished compost, according to the company.

“And compost has so many uses that we really should be producing it instead of doing more harm,” Bradley said. “Food waste either creates methane when it gets put into landfills and contributes to climate change, or harmful air pollution when it burns in an incinerator, contributing to health concerns.

“Neither of these are good options.”