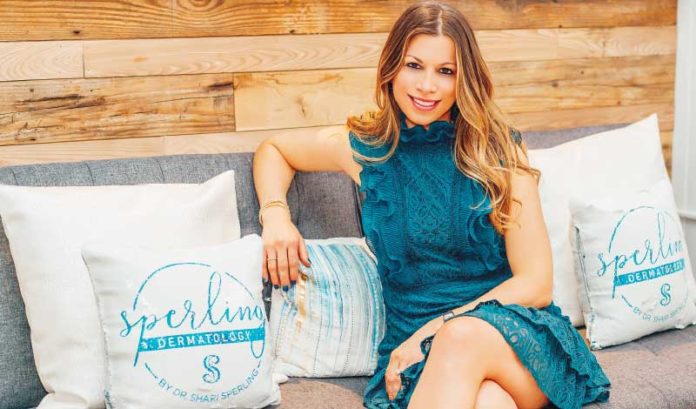 Dr. Shari Sperling had been practicing board-certified dermatology for more than a decade when she founded Sperling Dermatology in Florham Park in July 2016.

Specializing in medical, cosmetic, laser and surgical dermatology for adults and children, business was good. She said she had revenues of nearly $50,000 per month.

She thought, however, that there was more business out there. So did her husband, Ari Katz.

CoolSculpting, they felt, was the future.

CoolSculpting is a noninvasive fat reduction treatment that delivers targeted cooling underneath one’s skin to target, freeze and kill fat cells. When one’s body naturally eliminates the dead cells, they are left with a more sculpted physique.

“Everyone we knew had some sort of issue with certain areas of their body when it came to ‘debulking,’ if you will,” Katz said.

“So, though it did not have the brand recognition that it has now, if there was truly a safe and effective treatment in the market that could reduce fat, we felt that sort of revolutionary technology would be really attractive to our client base.”

The capital investment, Katz said, was substantial, with their first purchase of a machine in December 2016 costing nearly $150,000.

And there are recurring expenses, too.

“Each card has a certain number of cycles,” he said. “So, CoolSculpting is making money every time you run the machine.”

However, with the average price per cycle at Sperling Dermatology running $600 each and the average patient requiring nearly six cycles, treatments often run north of $3,600.

“It balances out,” Katz said.

Katz, however, wanted to tip the scales. And he felt the expertise he had gained during his lifelong career in digital marketing and sales could help boost their revenues from CoolSculpting.

“It became very clear to me that there was a massive opportunity in which to leverage the skillsets I had learned in my career to increase the return on investment for her small business,” he said.

Utilizing his background has led to significant dividends for the practice, as Sperling Dermatology has increased its revenues more than eight times in two years.

“The results have been remarkable,” he said.

Katz said he has employed a traditional sales funnel to advertise the service.

“We created a lead source through the internet by advertising on Google for anyone proactively searching for related terms, and also employ reactive advertising on Facebook to get users’ attentions,” he said.

Those lead channels then direct interested parties to a page on which to provide their information to Sperling Dermatology for a CoolSculpting coupon and consultation.

Katz said Sperling Dermatology is now generating more than 500 leads per month through those mediums.

Sperling Dermatology is now one of the highest-rated and fastest-growing dermatology practices in the Northeast, with over 600 five-star reviews on Healthgrades.

“We are now seeing about 300 new people per month, with nearly 200 of those patients ultimately receiving CoolSculpting treatment,” he said.

Katz, who officially joined Sperling Dermatology as managing partner in March 2018, said the treatments have attracted everyone, including celebrities.

Celebrity fans include as Kevin Jonas of the Jonas Brothers and his wife, Danielle Jonas, as well as Jennifer Lynn Farley (“JWoww” from “Jersey Shore”).

“It is a very simple treatment, without needles or surgical procedures,” Katz said. “Technicians can easily be trained to place an applicator on an area of fat and there are no health risks associated.

“Therefore, you do not need a doctor on premise to offer treatment.”

Sperling Dermatology now employs 20, with 17 employees in New Jersey, two in New York and one in Wisconsin.

“We employ a sales team primarily consisting of stay-at-home mothers who, although trained by us, are passionate about aesthetic treatments after receiving it themselves,” Katz said. “If a potential patient submits their information at 9 a.m., by 10 a.m., one of our representatives calls them to set up a free 15- to 30-minute consultation within a couple of days.”

Treatments result from consultations more than half of the time, he added.

Due to their rapid success, Katz said Sperling Dermatology is considering a nationwide corporate roll-out of CoolSculpting studios in the near future.

“The franchise model in our line of work would be too risky, with a franchise having independent owners leveraging your brand and playbook,” he said.

The two largest reasons patients ultimately do not receive treatment are because they don’t believe in or are concerned about the results.

That is why Sperling Dermatology is the only provider of CoolSculpting technology in the state to offer guaranteed satisfaction.

“Giving that power to individual business owners to represent our brand is not something we are interested in,” Katz said. “We are called Sperling Dermatology — it has my wife’s name. Therefore, franchising is off the table.

“What is on the table is a corporate-owned, regional rollout that we hope will grow from there.”

Sperling Dermatology in Florham Park offers a variety of aesthetic treatments in addition to its traditional medical practice, ranging from hair transplants to facial peels.

But one that often is coupled with CoolSculpting, Ari Katz said, is EMSCULPT, a noninvasive treatment that uses high-intensity, focused electromagnetic energy to target and stimulate muscles.

Sperling Dermatology began offering the service this year at all three of its locations, including the CoolSculpting studios in Montclair and Neptune.

“It is the only treatment in the market right now that can simultaneously burn fat and build muscle,” Katz, managing partner, said. “One treatment on your abdomen or buttocks is the equivalent of doing 20,000 crunches or 20,000 squats in 30 minutes.”

It currently costs nearly $2,000 for an initial treatment, which includes four 30-minute sessions.

“We also are working on a maintenance package, charging somewhere around $250 per month,” Katz said. “Similar to going to the gym, if you don’t exercise for a month or two, you won’t look the same. The results of EMSCULPT also can wear off after eight weeks, so the idea is to have patients come back for monthly maintenance.”