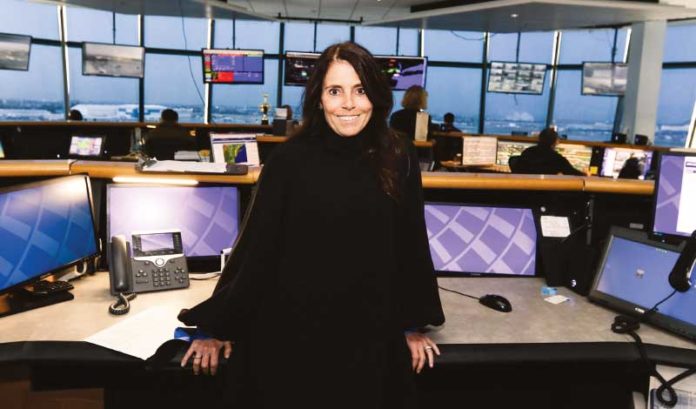 Shortly after taking the job as president of the New York/New Jersey region for United Airlines, Jill Kaplan had what some might consider to be an unusual request:

“I wanted to be part of the New Jersey business community,” she said. “I felt having a New York business card in New Jersey was a total disconnect.

“And it wasn’t true to the work that we want to do.”

What Kaplan wants to do is help United Airlines increase its presence and connections in New Jersey.

On the surface, that may seem unnecessary. After all, the airline is the sixth-largest employer in the state, a driver of $16 billion of annual economic activity, a payer of more than $500 million in state and local taxes and the pilot of more than 750 flights, carrying more than 83,000 passengers.

These are stats that may surprise some.

But they are ones Kaplan is eager to bring to light.

As is this: The longtime sales and publishing executive in New York City has plenty of connections — and presence — in New Jersey, too.

“To me, this is my home,” she said. “When I graduated from college, I was one of the first residents in Newport Towers. Me and two of my girlfriends jammed into a one-bedroom apartment. It was all we could afford.

“I grew up going to the Jersey Shore and my husband is from New Jersey. It’s very much in my blood and I’m very proud of it.”

Kaplan recently gave ROI-NJ a tour of all of United’s facilities in Terminal C at Newark Liberty International Airport while sharing her thoughts on her role in a position that was created when she joined the company in November 2017.

Here’s a look at the interview, which was edited for space and clarity.

ROI-NJ: Your selection for this newly created role was somewhat of a surprise for one reason: You had no prior experience in the airline industry. You were, however, a well-thought-of executive in media, having previously served as publisher of Crain’s New York and general manager of the Wall Street Journal. What made you switch industries?

Jill Kaplan: It was an unbelievably unique opportunity to go out of my comfort zone, to be challenged in new ways, to be able to evangelize for a brand I know and I trust — United was my client when I was at Crain’s.

They wanted someone who was able to look at the business from a disruptive point of view. That’s exactly what I did in the media business. Twenty years ago, we were a print entity. My goal at Crain’s was to evolve into a media organization that satisfied many different interests and perspectives, all while delivering something unique. That’s what we’re doing here.

ROI: Tell us how you’re going to do that?

JK: This is the largest travel market in the world, and I appreciate that there are choices. So, we need to differentiate ourselves.

One of the things that is critically important is an investment such as this.

(She motions to the uber-impressive Polaris Lounge for international business travelers. Of course, she could have just as easily been motioning toward all of Terminal C, which United has transformed into a travel destination, with 45 new restaurants and bars.)

A more important part is being part of the community. One of the biggest things that attracted me to the job was United’s commitment to the community. I always admired companies that not just said it, but did it. It’s something that we are committed to. To be able to work for a company committed to that is great.

(United says its commitment can be seen in the $60 million spend in supplier diversity, as well as $1.7 million in assistance to community causes.)

And, most of all, we need to listen to the community.

ROI: This is where those working in New Jersey are raising an eyebrow. Despite United’s massive presence in the state, it wasn’t always present here, especially in Newark. You’ve made it a point to attend numerous networking functions, sit on panels and join New Jersey-based organizations. Talk about the effort?

JK: There is very much an appetite to — and an understanding that we need to — localize what we are doing. It’s doing things such as making sure art in Polaris is reflective of the local community, working with local schools, hiring local employees and local vendors. We need to make sure the sauces on our food and the beer we serve has a local flavor. And that’s fun, frankly.

It goes to the overall way that we are helping to drive the economy of the state and making contributions in a whole host of ways. To be fair, this is something that United has done for a very long time, we just needed to amplify and increase and broaden our exposure through additional investments. When you have local leadership, you are able to telegraph what you are doing in different ways.

Being a part of the community is one of the things that I just feel very strongly about. You can’t fake it in New Jersey. There’s the business piece of it and a personal piece. And both of them are important.

ROI: How has this been received in the 20 months since you started?

JK: At first, I sensed a pent-up interest in people having wanted United to have someone here to engage in conversations. I’ve run into a lot of people who have said, ‘I’ve been trying to get in touch with United for years.’

Now, it’s managing those discussions. There have been plenty of conversations where I’ve said, ‘I don’t have a specific idea, but there are alignment points between your operation and our operation, so let’s explore it.’

We have a myriad of interests in terms of our portfolio that could be a match, so we need to figure out where there are opportunities. It might not be today or tomorrow. But it will be eventually.

ROI: Explain how that is going to help you grow the business and grow the brand?

JK: One often thinks of growth in terms of the (profit and loss), but growth also comes in our ability to be more involved in volunteerism and community projects. Our growth is being able to enhance the customer experience. Because we’re involved in so many different areas, the ideas need to be prioritized. But that’s the fun part. That’s being entrepreneurial and it’s a spirit that my boss is not only encouraging me to do, but is supporting.

The idea of looking at things in a different way, in a disruptive concept, is something every business is doing or should be doing. My mandate is not, ‘What was done,’ but, ‘What can be done for the future.’

I often say to folks, ‘If we do this, what will it mean for our business? What’s is the ROI? What are the metrics we are going to use to evaluate them?’ I think that enables us to take a fresh look at all of the things that we’re doing in New Jersey and fail forward. We can test and try.

And, as I said, we need to listen to our customers.

ROI: And many of those customers are business customers. How are you ensuring you are reaching the needs of the business community?

JK: I don’t want (business travelers) to feel like this is their only option because we are the biggest airline here. I want folks to feel excited about flying United. That’s part of the work that we’re doing. I want to customize experiences. We need to work creatively with companies through their travel departments: What is that they are looking for?

There used to be a phrase in TV, buying spots and dots. I don’t want that. I want people to be our ambassadors for what we’re doing and how we’re leading the charge and how we are making a difference and how we are taking care of them.

I’ve held a number of lunch-and-learns with travel decision-makers, and I always ask them: How is your success evaluated? What do you, as the customer, want?

ROI: Sounds like you’re really trying to walk the walk and talk the talk, to borrow a phrase?

JK: I know this might sound silly, but that was one of the attractions for me. I’m a curious person. I love people. I talk to anybody and everybody.

The airline business is a lot like the media business. A big part of the job is to be able to piece together trends and see things before others see them. I like that challenge.

United to resume daily flights from Newark to Portugal