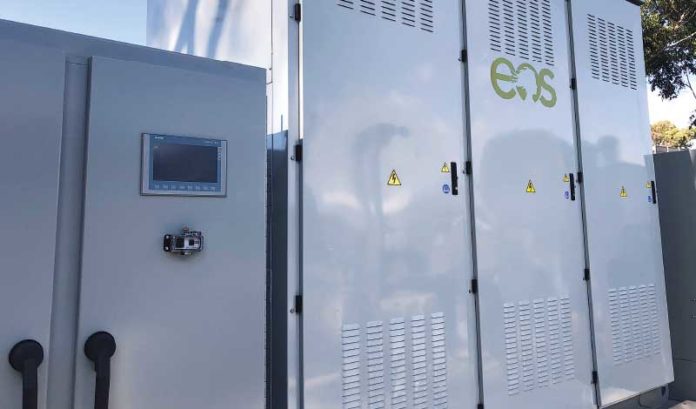 Countries that have rolling brownouts on a consistent basis are a good place to operate when you’re in the battery business.

And, just to be clear, we’re not talking about the batteries you put in the flashlights you keep in the drawer of the nightstand.

“During (brownouts), portions of grids can be powered down for about four hours at a time,” he said. “They do that regularly in places such as India and South Africa to prevent a full-scale blackout. That’s typically an indicator of where a battery technology with multiple hours of discharge capability can create a lot of value.”

Bouchard, senior vice president of business development and marketing for Eos Energy Storage, said these are the places where the company thrives.

Importantly, it’s a solution that might be helping keep the lights on where they aren’t always.

Any grid’s reliability comes down to having the power capacity available when the need is highest, Bouchard said. And the bell-shaped power demand that an energy grid experiences throughout the day look much the same no matter where in the world you are.

In some parts of emerging economies in places such as India and South Africa, local power grids can’t keep up with peak demand.

“Those places, as well as some Southeast Asian markets and island systems, for whatever reason, you have a shortfall of capacity or a distribution network struggling to keep up with an expansion of population,” he said. “And that’s when you’ll see utilities use rolling brownouts.”

The reason an energy storage solution might start to be favored over more conventional utility infrastructure improvements globally is because it provides more integration with renewable energy.

As Bouchard explained, it’s a mechanism for storing solar when the sun is shining and wind when there’s a breeze, and then using it for times of peak demand.

The rapid growth of renewable energy around the globe has served as a tailwind for the energy storage sector. And it’s largely because of that paradigm shift that the company is already deploying products in several markets outside the U.S.

One is in Tubarão, Brazil, where the New Jersey company’s storage system is being co-located with a more than 5-megawatt hybrid solar and wind energy project. Multinational utility Engie is installing that battery system.

“There was some government support and financing they’ve received specifically for the project, but Latin America as a whole represents a region of rapid renewable growth,” he said. “And, in some parts of the country, where the grid is less reinforced, they have an acute need for storage within their transmission and distribution network.”

As far as where else the New Jersey-manufactured batteries may end up, the ruggedness of the terrain won’t set the boundaries. The product has been tested in the hottest conditions — environments may risk combustion for a lithium-ion battery — and the coldest, but the company’s particular technology held up, according to Bouchard.

Right now, the barrier is local certifications or product compliance rules in places such as Europe or India. The company is currently working through those matters.

“You also have the intricacies of really maintaining cost competitiveness relative to local manufacturing and supply,” Bouchard said. “Because, in some foreign countries, utilities are in essence an extension of the government, so, often, they will create preferential terms or financial incentives in that local market.”

In a tariff-filled environment for global manufacturers, the company is trying to make its products at home in a cost-effective manner. So, the company is pooling resources with Camden-based Holtec International to manufacture its components.

With all Eos wants to do on the world stage, Bouchard wants to put a spotlight on that local partnership. It’s part of the company’s bright future.

“We’re doing that (manufacturing) with a capital investment that’s (1/20) cost of what’s required to prop up an equivalent lithium-ion facility,” Bouchard said. “They also have a presence in over 30 countries all over the world, so that helps as well.”

Duke Energy has installed the system in a DC-coupled solar + storage system in North Carolina, the Edison-based company said, while an Eos battery is being used “behind-the-meter” at the University of California, San Diego, in a project funded by the California Energy Commission.

“These two projects represent an important step in our journey to help accelerate clean energy while ensuring that it is competitive and reliable,” Philippe Bouchard, Eos’ senior vice president of business development and marketing, said in a prepared statement. “With over 10 years of testing and refinement, these deployments demonstrate that our system is ready to scale in two of the fastest-growing renewable energy markets in the world.”