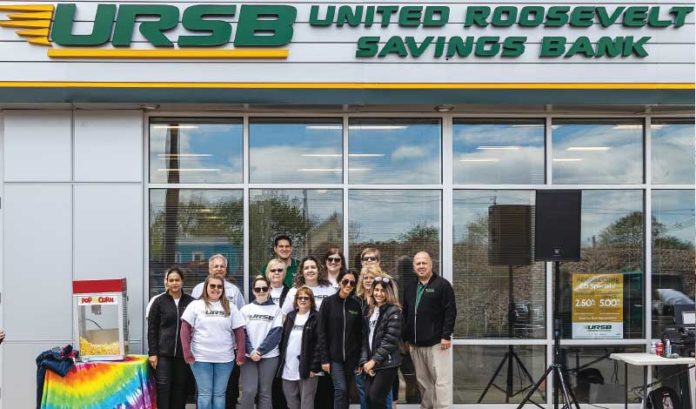 Right in the middle of the borough of Carteret is a century-old institution where Mayor Daniel Reiman, the town’s finance director, Patrick DeBlasio, and other community leaders make sure locals have what they need.

The bank, which also goes by URSB, has its sole bank branch in the borough’s downtown. It only needs the one, because the bank is all about Carteret — that’s why its board of directors is a who’s who of Carteret officials, such as the mayor.

Officially, Kenneth R. Totten, CEO and president of URSB, isn’t a city official. But he’s quickly joining the roster of community leaders himself.

“The primary focus we’ve taken since I joined the bank (in 2015) has been, when something happens in Carteret, we want to be a player in it,” he said. “We want everyone here to call us to see if we can help them with funding. … We want to be the first place locals think of.”

And, when he says he wants to be the first call Carteret locals make, he might be the one answering the phone.

“What I do — on my business cards and any letter I sign, I have my personal cell phone on it,” Totten said. “I encourage people to call me on it if they have an issue. You won’t find that at a larger bank. That’s one of the things that differentiates us.”

URSB is among the smallest banks in New Jersey by most measures. But it’s also one of the largest banks that have just a single physical location.

And, while it’s also more than 100 years old, it doesn’t look its age. The bank recently updated its Carteret base, inspired by the residential and commercial real estate development projects that the borough is currently undertaking.

“We want to be a vibrant part of that,” Totten said. “So, we spent a significant amount of money renovating the inside and outside of our bank to match the look of the new town.”

Around $1.3 million is the amount the bank dedicated to refreshing its headquarters to match the borough’s larger revitalization.

At a time when banks are stretching their geographic footprint larger than ever, or simply throwing in the towel and finding bigger banks to partner with, URSB is instead content to improve its presence in the same community it always has served.

“Like anyone else, we’re looking to expand, but, when I came on board here, one the very first things I said we need to do is address the needs of those from Carteret,” Totten said. “It’s our hometown. I didn’t feel like we were a vibrant enough part of it, so we wanted that first before we looked at other opportunities.”

And it’s actually paying off. Totten reported that the bank has increased its asset base by $36 million within just the past 15 months. After that growth spurt, which Totten says is unprecedented for a bank of URSB’s size, it now has about $140 million in assets.

Given its singular focus on the Carteret area, the bank’s continued success is very tied in with the prosperity of the borough’s businesses. To that end, the bank rolled out a program that encourages its customers to purchase goods and services from local companies.

“So, if someone has our debit card and they use it at 15 selected merchants in town, they get some sort of discount, whether it’s a free cup of coffee with a food order or a free tire rotation,” he said. “Our goal is to have between 40 and 50 merchants in this, so we can really assist our local businesses.”

That doesn’t seem to be in the future for Carteret’s unofficial city hall.

“We’re growing not so we end up just another branch of someone else,” Totten said. “We’re growing to be more a fabric of the community here. And our plan is to continue doing that.”

Education
Linda Lindner -
December 7, 2022
Seton Hall University on Tuesday said it will welcome Mary Kate Naatus to the position of assistant provost and dean of continuing and professional...