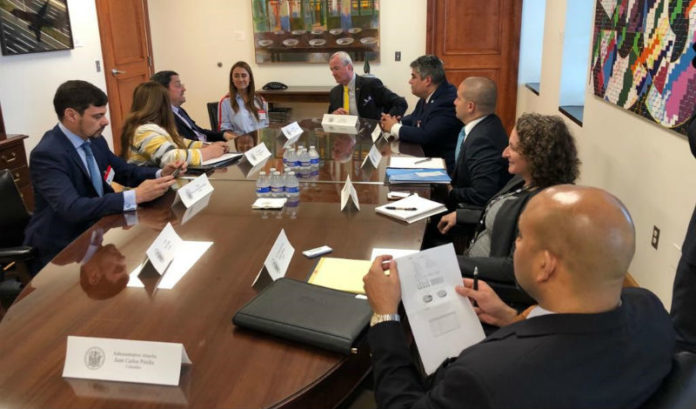 Gov. Phil Murphy met with Colombian Ambassador Francisco Santos Calderón this week to discuss the importance of the country’s economic value to New Jersey, as well as a potential trip to Latin America and opening the door for greater economic ties.

The meeting was attended by Statewide Hispanic Chamber of Commerce chairman Luis De La Hoz, Choose New Jersey CEO Jose Lozano and other representatives from the state and the Economic Development Authority.

Companies including Google, Uber and Amazon already have laid the foundation for a Colombian office by opening their own Latin American hubs in Colombia.

In addition, De La Hoz, a Colombian-American, said the governor could plan a trip to Latin America next year, as well as plan to visit the presidents of the various countries at the United Nations General Assembly in September.

“We are pushing that he visit Latin America, especially Colombia, Ecuador, Peru and Mexico — not just because of the population, but because of the trade,” De La Hoz said.

“The Dominican Republic has a larger population (in New Jersey), but because it’s an island, you cannot grow the trade (with them) and they don’t produce many products or services that we can trade with them.”

De La Hoz said agriculture and infrastructure, as well as health care, are sectors that provide the best opportunity for greater ties.

According to information from the Economic Development Authority, as of 2018, Colombia’s impact is $1.25 billion in trade of goods, and the country is the sixth-largest goods export market of New Jersey in Latin America.

The sectors New Jersey exports to Colombia most include essential oils and perfumes, nuclear reactors, boilers and machinery and other chemical products. New Jersey largely imports mineral fuel and oil from Colombia.

Business groups to Murphy: Give us specific data points, dates on...