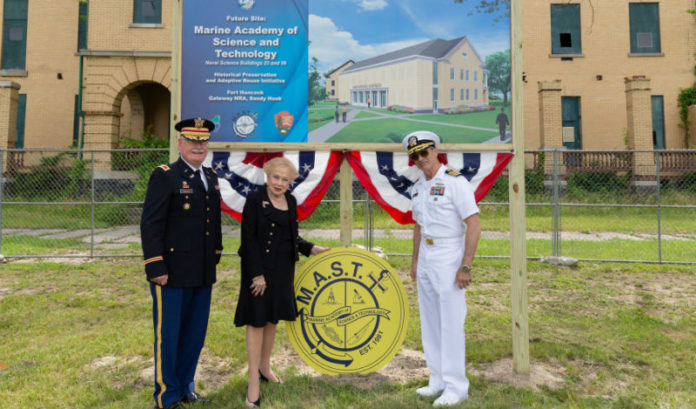 A groundbreaking ceremony was recently held to mark the start of reconstruction of the former Fort Hancock barracks located at Sandy Hook.

Officials from the Monmouth County Board of Chosen Freeholders, the Marine Academy of Science and Technology, the U.S. Navy and the National Park Service attended the event.

“The four years of planning, negotiations and discussions have finally payed off,” Freeholder Lillian G. Burry, who led the renovation project and serves on the Fort Hancock 21st Century Federal Advisory Committee, said.

“Through the cooperative efforts between the Board of Chosen Freeholders, Vocational School District, NJROTC and Gateway National Recreation Area, reconstruction of the 19th century, historical structures will commence and nurture the growth of 21st century teenagers and generations of cadets to come.”

The reconstruction efforts are targeted at Naval Science Building 56, which will house storage space for more than $1 million worth of Navy uniforms and equipment, and Building 23, which will house classrooms, a gymnasium, showers and other facilities for cadets.

Both buildings are slated for completion by September 2021.

“There is already such rich history here at Fort Hancock as it once fortified and accommodated our courageous United States Army,” Burry said. “I am so pleased that our collaborative, reconstruction project will continue to write history.”

Canopy by Hilton says it mixes culture, convenience as it opens in Jersey City Arts District

Former restaurant to be turned into retail store after sale, Vantage says

‘There is no practical way to quarantine N.Y. from N.J. and Conn.’

Canopy by Hilton says it mixes culture, convenience as it opens in Jersey City...

Food & Hospitality Eric Strauss - October 20, 2020
A Canopy by Hilton hotel has opened in Jersey City’s Arts District, the developers announced recently. The hotel, part of Hilton’s lifestyle brand, is the...

Industry Tom Bergeron - October 20, 2020
Gov. Phil Murphy has made creating an innovative economy one of his top priorities since taking office. Three years after he was elected, you...

Education Tom Bergeron - October 20, 2020
It’s a simple premise, but one not always followed: The commissioner of education should have a background in the schools they will oversee. Gov. Phil...

‘There is no practical way to quarantine N.Y. from N.J. and...