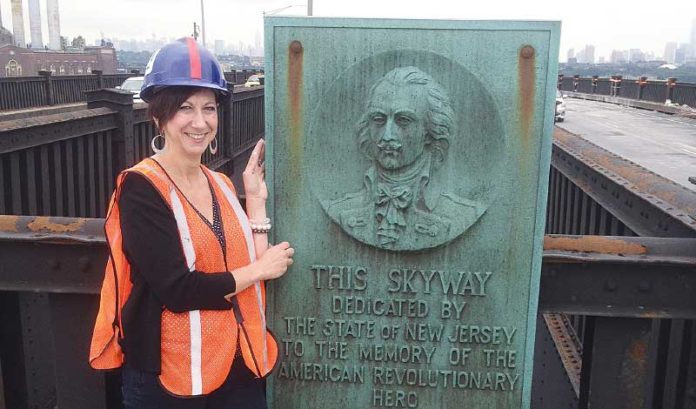 But Hecht, program director at the Port Authority of New York and New Jersey since last October, said it all is worth it.

“I love running from place to place,” she said. “Anyone who works in transportation knows how they are part of an end product that will have positive impacts on people, their safety and the economy, and that is what drives us to work such crazy hours.”

A New Jersey native, Hecht brings nearly 28 years of New Jersey transportation experience to the Port Authority, having overseen reconstruction projects and process improvements with the New Jersey Department of Transportation and New Jersey Transit throughout her career.

Currently, Hecht is spearheading the development of the PATH to Newark Extension project, which will extend the PATH transportation system into the South Ward of Newark to increase access to the airport and New York City.

She also was honored with the prestigious Government Engineer of the Year award from the American Society of Civil Engineers —New Jersey section last month.

But Hecht will not be a Jersey resident for much longer.

“After living in East Windsor since 2001, I will be moving to Long Island, New York, in a few weeks, after marrying my husband — whose job was transferred a year and a half ago — a little over a year ago,” Hecht said.

However, her work with the Port Authority of New York and New Jersey is just beginning.

“The Port Authority always has been viewed as (a) progressive and exciting agency to work for, so for someone in transportation, working for the Port Authority is like playing in the major leagues,” Hecht said.

ROI-NJ spoke with Hecht to learn more about her upcoming work in the state — and beyond.

Here’s what she had to say:

ROI-NJ: What were your initial thoughts upon learning you would need to relocate — and what ultimately brought you to work with the Port Authority?

Dana Hecht: I love being in New Jersey, but I knew I would sadly have to leave my career employment with the NJ DOT. Still, when I thought about what the Port Authority manages and all that I would get to help impact, I mean, just the airports alone — Newark, John F. Kennedy, LaGuardia — plus the tunnels, the bridges, PATH — when I thought about all those systems and how many people they impact annually, as well as their impact on the global economy, it made a tough decision a bit better by allowing me the opportunity to remain a public servant while extending my reach.

ROI: You’ve served the New Jersey transportation industry for nearly 28 years. How exactly did you get to the “major leagues” and what are you hoping to affect there?

DH: When I started at NJ DOT, it was not exactly where I thought my career would be headed. However, I graduated college during a recession and was sending my resume out everywhere. So, when one of my mentees recently asked how I had laid out the road in front of me, I said: ‘This was not the field I expected to go into. But if you had asked me three years ago if I would be at the Port Authority right now, I wouldn’t have thought so. I would’ve thought I’d be continuing my career as it was.’

I don’t ever really try to plan it out. I simply try and continue to grow myself professionally and personally by getting better at what I do. I have never allowed any one job title to dictate the boundaries of what I look to accomplish and have always been lucky enough to have leadership that allows me to grow beyond any (such) boundaries.

I’ve had a wonderful experience since I began as program director for the PATH to Newark Extension project at the Port Authority and have even recently entered into the pre-planning process for its bus terminal replacement project, as well. But PATH is connected to an airport and is a rail line adjacent to highways, so I now have to understand those aspects, too. It’s an opportunity to be able to grow in understanding of the bigger picture, to think not just New Jersey, not just New York, but of the global impact.

ROI: Tell me about the intentions behind the PATH to Newark Extension project and where the Port Authority currently is in the process.

DH: There is $1.7 billion currently programmed within the Port Authority capital program, of which $1 billion was dedicated for this project. … The PATH line that currently runs from the World Trade Center to Newark Penn Station would extend south approximately 2.4 miles. We would extend parallel to the railing station, or where people currently connect to New Jersey Transit or Amtrak or the AirTrain, at Newark Liberty International Airport. … Right now, we are in the pre-planning stage. We’re hoping to finish planning within the next year, which would then bring us into design.

This project makes it easier for people to get to Newark (Liberty) International Airport, which is a hub for business commuters and tourists. However, this extension is not simply about that — it also is about creating easier access to public transportation. This project will provide underserved neighborhoods to the northwest of the airport with lower cost transportation and opportunities for employment in Lower Manhattan, Jersey City, Hoboken and even in other parts of Newark, where there are central business districts, while also creating better access for airport employees.

ROI: New Jersey certainly has its transportation challenges, with its aging infrastructure and its heavy traffic congestion. What have you learned?

DH: Finding ways to make cost-effective improvements with the least amount of inconvenience is always a challenge. New Jersey is a small, congested, densely populated state, so how do you prioritize the maintenance of aging infrastructure while also keeping things operational?

Most places, public or private, never have enough staff or financial resources to be able to do everything they need to do. So, we need to find better and smarter ways to plan, deliver and execute both on specific projects and on the macro-scale regardless of the specific task. With transportation, we’ve got multiple states to consider — New Jersey, New York, Pennsylvania, Connecticut — (so) the picture must extrapolate outward. We also can’t inconvenience people or negatively impact the economy, so we have to try to make improvements and benefits to our customers almost seamlessly.

And sometimes, you don’t have to get more money to be able to do more. One of the great things about the public sector in New Jersey and New York is that we have a lot of people with passion despite being extremely constrained for all the needs we have. We’re constantly striving to be able to do more with less. This is an industry that really understands and does that for the good of the end user, because we recognize how we affect your quality of life, your safety and the economy.

If you can’t increase your fiscal resources, you can find better ways to do things that will help squeeze more water out of a sponge. For example, there currently is an initiative in New Jersey called the New Jersey Transportation Agency Partnership that brings together all the transportation agencies, the consulting and contracting communities, to collaborate on common issues related to standardizations and efficiencies. It is these types of behind-the-scenes efforts that will ultimately bring more work to the state that the end users often are not aware of.

Challenges make you a better public servant and they make the agencies, better, too. … Maybe you’re not increasing your bottom line from a fiscal standpoint, but you’re getting more out of what you’re doing.

ROI: Finally, as a woman who has long worked in a male-dominated industry, what has your experience been like? How have attitudes toward women in your industry changed?

DH: When I went to school for engineering, there were three women, including myself, in my civil engineering classes. Thankfully, that is changing.

For example, at the Port Authority, there is a major effort to ensure that diversity and inclusion is woven into the fabric of what we do every day, including being part of our performance ratings, because delivering a project or program in transportation is truly a team effort. Diverse backgrounds and experiences bring all sorts of perspectives, ideas and solutions to the table and should so be seen as a positive thing.

I have had various training since I started here, but one in particular was our training in unconscious bias, which as a woman I have experienced in my career, even over the last few years. The director of the Port Authority observed that training to make sure it was being taken seriously and was up to his standards.

Are we where we should be? No. But you have to start somewhere, and we definitely have started.