Home Finance First National Bank of Elmer may not be down the Shore, but...
Facebook
Twitter
Linkedin 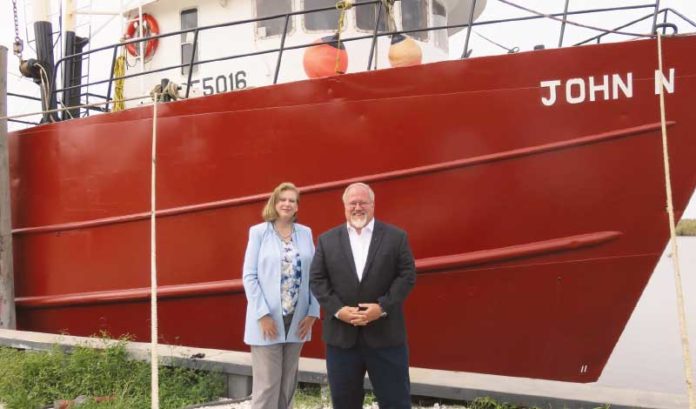 When the First National Bank of Elmer got started 115 years ago, it was founded in a barbershop in its namesake Salem County borough. That’s at least an hour’s drive from the Shore.

So, when the bank recently went fishing for a customer segment, what it came up with might be a surprise.

“What we have down in South Jersey is a concentration of seafood businesses,” said Brian Jones, CEO and president of the bank. “And, because of banking industry consolidation, there’s fewer players in that market down there today than there were five or six years ago. And these seafood businesses need new banking partners.”

Not keen to tell the tale about the big one that got away, this community bank is pursuing clients in the South Jersey fishing industry, adding to the small and midsized businesses it already serves in its footprint across Cumberland, Gloucester and Salem counties.

And the sector is a big one. Nationally, the seafood industry — between harvesters, seafood processors, wholesalers and retailers — generates about $129 billion annually, Jones said. Combined, the country has more than a million jobs in this sector.

Locally, the combined port of Cape May/Wildwood is one of the largest commercial fishing ports on the East Coast, he added. A recent report put the value of this South Jersey industry at $85 million.

Cold Spring Fish & Supply Co., one of the region’s largest seafood businesses, contributes about 500 jobs to the Cape May County economy — making it one of the county’s largest employers. Another Cape May business, Snow’s/Doxsee, has the nation’s largest allocation for fishing and harvesting ocean clams.

There are more businesses in the region’s fishing industry, mostly tightly held operations that have been handed down from generation to generation. These businesses are looking for banking partners who have similarly long-held ties to the industry.

“For that reason, this type of lending is not the easiest to break into,” Jones said. “You need to know how to work with this sector if you’re going into it, or you’re in trouble. But if you can do it, you’re in demand.”

The First National Bank of Elmer got into the market with the assistance of Elizabeth Hulitt, the bank’s new senior vice president. She’s a transplant from an acquired banking entity, one of those along the Shore that once eagerly angled for fishing industry clients. She has an expertise in the local industry and has closely worked with the Massachusetts-based regulators that monitor it.

The amount of harvesting of scallops or clams that can be done locally is controlled by permits those regulators issue. The high price tag on those permits is one of the reasons the industry keeps close ties to bankers.

“You have to maintain your vessel and your fleet, which can be very capital-intensive,” she said. “Also, when there’s an opportunity to add a permit to fleet’s ability to harvest, you have to be in a good liquidity position to do that.”

Like the banking industry, fisheries and seafood suppliers have consolidated over the past few years, which has only increased the value of those permits.

Hulitt added that the industry’s borrowing activity is driven by a swarming number of vertically integrated companies with a fleet of commercial fishing vessels, as well as facilities for freezing and processing products.

“That provides many opportunities for a traditional community bank to work with these companies to provide financing for equipment, real estate and other assets,” she said. “As a bank, we’re very fortunate to have a financing need that we’re able to understand and also see and touch in our own backyard.”

To make sure a loan is successfully recorded under the terms and conditions set by the U.S. Coast Guard, legal experts are often called in for the loan term.

Some aspects of these loans can be complicated, but Jones said working with his bank’s growing customer niche is not altogether different from other banking relationships.

And his belief is that — like a number of other industries — the seafood sector prefers a community bank’s more personalized model to the sometimes-wide net cast by larger institutions.

“With people who are running these boats, a lot of their business relationships involve buying and selling in a hands-on way with people they trust, so they want the same thing on the banking side,” he said. “That’s something we want to offer.”