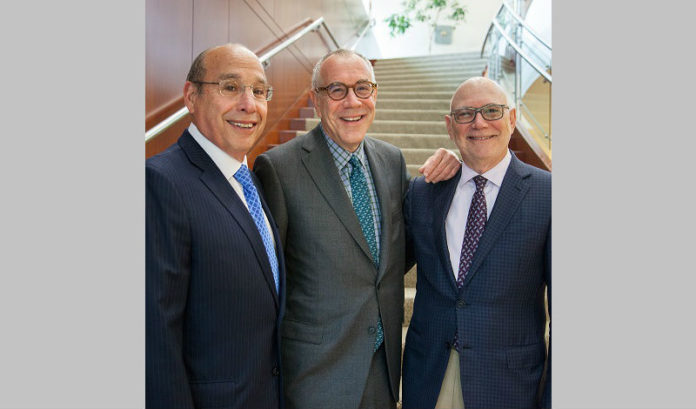 The New Jersey Performing Arts Center in Newark announced Thursday it has named Barry H. Ostrowsky, RWJBarnabas Health CEO and president, and Steven M. Goldman, a senior partner at Kramer Levin Naftalis & Frankel, co-chairs of its board of directors.

The pair will succeed John R. Strangfeld, the retired chairman and CEO of Prudential Financial.

The co-chairmanship will be effective July 1, NJPAC said.

“From the time of its first imagining by Gov. Tom Kean and Ray Chambers, the arts center has been blessed with extraordinary volunteer leaders. Their business expertise and civic activism have positively informed the exponential growth of NJPAC’s work and mission over a generation,” NJPAC CEO and President John Schreiber said. “I extend great gratitude to John Strangfeld for his service during the transformation of our business model over the last five seasons, and I look forward to partnering with Barry and Steve, who put wisdom and heart into everything they do.”

NJPAC said many of New Jersey’s prominent corporate executives, public administrators and cultural leaders make up its board of directors.

Ostrowsky, who was elected to the NJPAC board in 2017 and is a current member of its Executive Committee, said the partnership between RWJBarnabas and the arts center promotes wellness in the community.

“I’m incredibly impressed with NJPAC’s commitment and mission,” Ostrowsky said. “I think NJPAC’s greatest gift is its willingness to invest in the lives of the people who reside in the community, and it does so in a culturally competent way. Its program is led – and has been led – by people who are genuinely devoted to elevating lives.”

Goldman’s nine-year tenure on the board includes chairmanships of the Operations and Finance Committee and of the board of managers of Theater Square Development Co., a subsidiary of NJPAC. He also served as assistant treasurer of the NJPAC board.

“I’m really pleased that Barry Ostrowsky is going to be co-chair with me and I’m looking forward to working with him, John Schreiber and the rest of the management team to make certain that the Arts Center continues to be a national leader for cultural literacy,” Goldman said.

Strangfeld joined NJPAC’s board in 2009. He and William J. Marino, the retired chairman and CEO of Horizon Blue Cross Blue Shield, were named co-chair in 2013. Strangfeld was elected board chair in 2015.

“I’m very confident about the continuity of quality leadership promised by the forward-thinking team of Steve Goldman, who has a long internal history with NJPAC, and Barry Ostrowsky, who’s a prominent and socially conscious member of the business community,” Srangfeld. “The combination of these two individuals bodes exceedingly well for NJPAC’s future. I think the best is yet to come.”