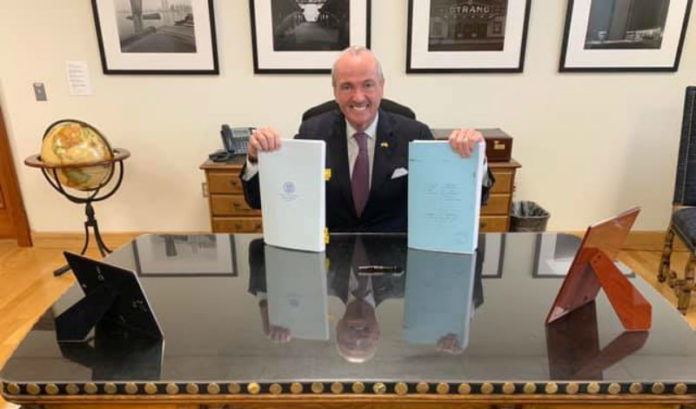 Gov. Phil Murphy signed a $38 billion budget for fiscal year 2020 on Sunday, meeting the June 30 deadline when the state is required to pass a balanced budget each year.

The governor did, however, line-item veto $48.5 million from the original budget passed by the Legislature on June 20.

The cuts from shared services and Cooper have political implications in Murphy’s ongoing battle with Senate President Stephen Sweeney (D-West Deptford) as well as the tax incentives battle playing out that has targeted Camden and South Jersey Democratic powerbroker George Norcross.

Murphy said Sunday that the cuts were not political moves.

East Orange, which was acquired by California-based Prospect Medical Holdings in 2016, is being sold. The hospital is also slated to get $4.4 million in charity care dollars for the upcoming fiscal year.

In his speech Sunday, Murphy said he has not given up on a millionaire’s tax, even though it did not make it into the budget negotiations for this year.

“Unlike my predecessor (former Gov. Chris Christie), I will sign a millionaire’s tax,” he said.

“New Jersey today has more millionaires than ever — not fewer — and their numbers are growing.”

Murphy was unable to make many significant changes to the budget passed by the Legislature, since it included many of his agenda items — a point he acknowledged Sunday.

He said a millionaire’s tax, “barely 2 cents on every dollar of income over $1 million,” will not make millionaires leave the state.

“In fact, as a result of the (President Donald) Trump tax cuts, those same very wealthy people will, after a millionaire’s tax, and even after the loss of the (state and local tax) deduction, still come out way ahead,” he said.

Sweeney attended Murphy’s event, and Murphy acknowledged him at the start of the speech.

Assembly Speaker Craig Coughlin (D-Woodbridge) said the budget the governor signed reflects the shared priorities of the Legislature and administration.

“The responsible and thoughtful budget the governor signed into law today funds our shared priorities,” he said. “I’m particularly pleased that we stood up for the middle class by expanding the Senior Freeze Property Relief Tax program, doubling the veterans’ income tax deduction and providing for almost $150 million in property tax relief along with increasing funding for NJ Transit. There is still work to do to improve the lives of our friends and neighbors. The Assembly is committed to working with the governor and the Senate to continue to address the issues that matter most to the 9 million residents of the Garden State.”

The budget was both lauded and criticized by business officials.

“Our policymakers should understand that New Jersey simply cannot sustain such large increases in expenditures every year when our pension liability and post-employment benefit obligation has grown to more than $151 billion,” she said.

“After another contentious budget season, New Jersey maintains the top Corporate Business Tax rate, income tax rate, sales tax rate and property tax rate in our region. Gov. Murphy has promised to continue the call for more taxes, including a broadening of the state’s top income tax rate of 10.75%. Our concern is the governor will continue to neglect the structural deficiencies that have caused New Jersey’s long-term debt obligations to balloon 382% between 2007 and 2017. Extending the top gross income tax rate, which is third in the nation, will not solve our fiscal woes. Nor is it truly a matter of tax fairness when the top 1.5% earners pay more than 40% of the state’s annual gross income tax revenue.”

New Jersey Chamber of Commerce CEO and President Tom Bracken thanked the Legislature for not entertaining the governor’s millionaire’s tax.

“The good news is that Senate President Sweeney and Assembly Speaker Coughlin heeded our call, and that of many other business organizations, and scrubbed this budget of new taxes, specifically the so called ‘millionaire’s tax,’” he said.

“At the same time, the budget makes appropriate investments in education, job training and infrastructure. It also funds the public employee and retiree benefit program and provides property tax relief. It is now critical that our state leaders take additional steps to improve New Jersey’s economy and make our state more competitive and more affordable.”

“For the first time in recent memory, widespread and bipartisan agreement that our state taxes too much determined the content of our state budget,” she said.

“Approving a budget without tax increases with yet higher spending represents a meaningful step, but leaves unfinished business in order to restore our state as a place where both parents and their children can afford to live. This incremental success must spur more bipartisan action this year to address our state’s addiction to spending. A budget that held the line on taxes in 2020 should serve as an impetus to build a 2021 budget that actually reduces spending and passes on savings to taxpayers.”