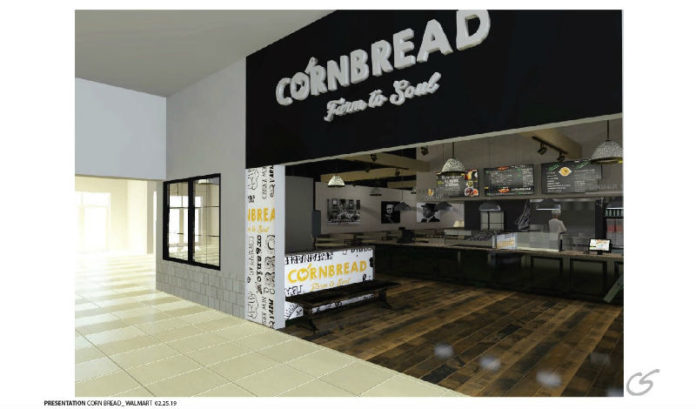 Cornbread, the fast-casual, farm-to-table soul food restaurant co-founded by Adenah Bayoh, founder and CEO of Adenah Bayoh and Cos., and Elzadie “Zadie” Smith, founder, owner and executive director of Zadie’s Nurturing Den in Summit, as well as Zadie’s Early Childhood Center and Zadie’s of the Oranges in East Orange, is beginning its nationwide expansion with a partnership with Walmart.

“When I began my journey as a restaurateur, I was turned down by seven banks before I was able to secure the financing I needed to purchase my first restaurant,” Bayoh said. “Now, 13 years later, my own signature soul food restaurant is expanding outside of New Jersey with the support of one of the largest retailers in the country.

“This is proof that drive, passion and hard work can help you realize your most ambitious dreams.”

Cornbread will expand to three locations near Pittsburgh, in West Mifflin, Tarentum and Greensburg, Pennsylvania, this year, while a fourth independently owned location will open in Newark next year, Bayoh said.

Each store will employ nearly 35.

“Our wholehearted intention always was to build Cornbread into a national brand,” she added.

The concept certainly has all the trademarks consistent with Bayoh’s projects, including integrity, sustainability, affordability and an investment in the people and the communities in which she does business.

Bayoh, who opened her first restaurant at age 29, currently heads the parent corporation responsible for IHOP franchises in Paterson, Irvington and Newark, as well as a real estate development portfolio with hundreds of millions of dollars in urban redevelopment projects.

“Cornbread was born out of a vision and belief that we could create a space where friends and family can enjoy soul food that is also healthy and where we invest in our employees,” Bayoh said.

Bayoh said she partnered with Smith, a native of Georgia who has opened and grown multiple state-of-the-art early childhood centers and care facilities since relocating to Summit, for her lifelong talent and passion for cooking classic Southern soul food.

The self-made entrepreneurs co-founded the fast-casual restaurant concept and opened its original location in Maplewood in October 2017.

“The response since has been tremendous, with the community and the state opening their arms to us,” Bayoh said. “Our test of concept has truly been successful.”

Yes, the fast-casual restaurant serves cornbread, but there also are dishes such as fried and baked chicken, catfish, mac and cheese, collard greens, candied yams and peach cobbler that infuse early American soul food cuisine with Caribbean flavor influences for between $5 and $20 per patron.

Furthermore, its ingredients always are freshly sourced from local and sustainable farms, markets and purveyors.

“Often times with concepts like Cornbread, which pays so much attention to its ingredients, people want to keep it exclusive,” Bayoh said. “But our goal always has been to make Cornbread accessible to everyone who works hard for their money and still wants to be able to put healthy, quality food on their table and in their bodies.”

That is why Walmart, one of the largest U.S. retailers with billions in revenue, was a great fit, Bayoh said. The new Cornbread restaurants in Pennsylvania will all be located inside of Walmart retail locations.

“It was a no-brainer,” she said. “I can’t thank the team at Walmart enough for recognizing the power of food and family.”

“Usually, when you go to market, you hire more than you need because you do not know if everyone is going to make it,” Bayoh said. “But here, in our new location, I am filled with gratitude because everyone we hired already has been (exceeding) our expectations.

“All of them are so engaged and filled with purpose, and that is so encouraging to see — a young, diverse group of adults working together toward something that means something to us.”

Cornbread’s Newark location next year will be part of Bayoh’s mixed-use 84-unit redevelopment project at 915 Broad St., across from City Hall.

And Bayoh said she never would rule out opening more locations in New Jersey.

“Cornbread is New Jersey-born and -grown,” she said. “We never would have been able to go to the Pittsburgh area or to any other U.S. city without the support of the people of New Jersey.

“New Jersey has our heart and I cannot stress enough how thankful we are to have started here.”

When you’re living the American dream … and coming to grips...

Yankees moving Class AA affiliate to Bridgewater, to compete as the...