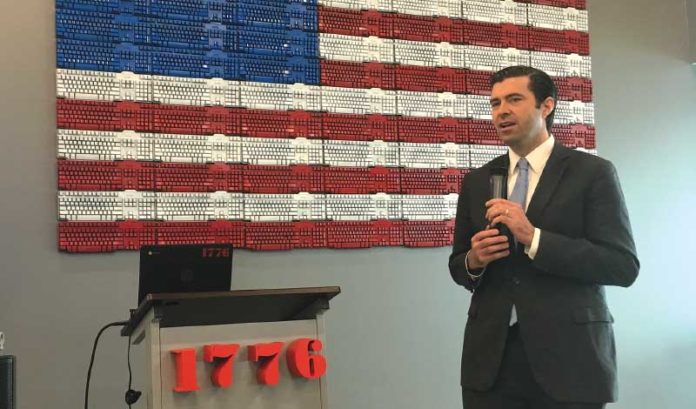 Last month, almost 30 startup founders had 10-minute meetings with some 20 investors at the latest Founders & Funders event, sponsored by the New Jersey Economic Development Authority. The event took place at the 1776 coworking space in the Cherry Hill Mall.

Here are some more of NJTechWeekly.com’s interviews with attending startups.

Sheri Kurdakul, founder and CEO of VictimsVoice, said her company is now located at the 1776 incubator.

“I am a survivor of 29 years of domestic violence,” she told us. “Recently, the MeToo movement has brought domestic violence to the forefront. However, most cases don’t make it to court because the victim can’t remember when, can’t remember where, and so there isn’t enough evidence to go forward with the case. We have created a digital diary, called ‘VictimsVoice,’ that allows victims of domestic violence to record incidents of their abuse. It encrypts it and stores it permanently, and meets the strict legal standards of court admissibility.”

Kurdakul had met with four investors by the time we spoke to her, but two were clearly not in her space.

“The third pushed back a little, which I thought was great. He was very familiar with one of my competitors and so I helped him better understand how we differentiate ourselves from that (company). The fourth one gave me some amazing feedback and offered to review my pitch deck and help me through the process. This was my first pitch ever and so it was great to get that honest feedback.”

“We have a smartphone solution that monitors the driving habits of people. This is useful for insurance companies, who can reward safer drivers. It’s useful for fleet companies who can measure their drivers and reduce chances of accidents,” said Zarick Schwartz, founder and CEO.

According to the company’s website, “RideMetric turns your smartphone into a personalized driving coach, helping you drive safer by cutting down on risky habits such as speeding and harsh braking.”

A separate metric tracks fuel efficiency, as most drivers can save up to 10 percent on gas by eliminating unnecessary driving behaviors. In addition, RideMetric has location metrics and stores detailed information for every trip you take, such as the start and end points and the route taken.

“You can also find out where you parked your car, or if any nearby spaces have recently been vacated by RideMetric users,” the company said.

By the time NJTechWeekly.com spoke with Zarick and his cofounder, Roy Schwartz, they had had meetings with three investors, all of whom asked them to send more information about their product and company. The investors wanted to know more about the customers they already have, about their patent and about how they differentiate themselves in a market that already has similar devices.

“SiLAS is a social emotional learning platform. It is a technology-based service. We provide game controllers and microphones for students to virtually role-play social and emotional scripts,” said Chris Dudick, the company’s founder and CEO.

“I met a lot of interesting people here, and I’m meeting people who can invest in us now, but also people who can be that second investor when we are farther along, which is really cool,” he said. “You are making relationships here, and, when you’re ready for that next round, it’s not something you have to work as hard for. You have nurtured that relationship.”

Dudick said that he had gotten some good advice about hiring a salesperson for SiLAS, and discussed whether the person he hires should be a tech salesperson or a jack of all trades.

“Regardless of which we choose, we need some help to scale,” he said.

Explaining how SkyeBrowse works, cofounder and CEO Bobby Ouyang said: “Whenever there is a car crash, a lot goes on behind the scenes. Police spend up to two hours taking measurements in a car crash, and they spend another four hours each day filling out paperwork. This can be done in two minutes using our product. If you are police officer at the scene of a car crash, you open mobile SkyeBrowse on your phone. A drone will autonomously fly itself, record video and turn that video into a 3D model in two minutes. We are the fastest 3D-model software in the world.”

The startup has offices in Hong Kong and California, as well as Princeton.

Talking about his meetings with investors, Ouyang said that they had been very useful.

“There were a lot of good networking opportunities with investors, as well as opportunities for potential partnerships,” he said.

The investors also gave Ouyang some good advice relating to the international nature of his company, which now also operates in Spain, Portugal, Dubai and China. For instance, one investor noted that “we need multiple companies … to manage international tax implications.”