Home Industry Sherrill on new Chatham coworking space: ‘If we build it, they will...
Facebook
Twitter
Linkedin 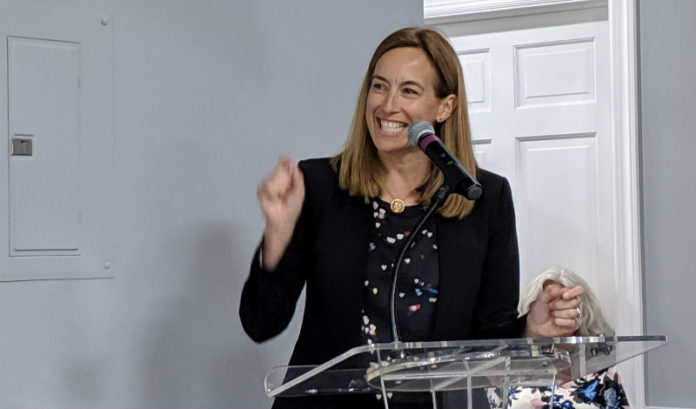 “We are not sure which kind of great innovators are going to come out of The Station, but I think we know it’s sort of a ‘If we build it, they will come’ scenario,” Sherrill (D-N.J.) said.

The congresswoman from the 11th District was speaking at the ribbon-cutting ceremony of The Station, a new coworking space in downtown Chatham aiming to serve as a collaborative destination for entrepreneurs and startup businesses.

Sherrill said she keeps reminding people who don’t realize, especially on the East Coast, that Silicon Valley is the suburbs, and it’s in those suburbs where that innovation is taking place.

“You don’t hear it often, but I think right now the suburbs are incredibly exciting,” Sherrill said. “We have people doing things here in Morris County that is so technological and precise that it isn’t being done anywhere else.”

The space is a spotlight of the entrepreneurial initiative Startup Moveup Morris, a campaign focused on small businesses and the promotion of coworking spaces, incubators and accelerator programs housed in municipalities within the county.

The Station will double as event space to accommodate networking groups, panel discussions and company parties.

“We hope to be an epicenter and catalyst for the future downtown of Chatham,” said Jeff Garibaldi Jr., director of support services at The Garibaldi Group, best known for its work as the leasing brokers for Bell Works in Holmdel. “We’ve grown with Chatham as much as Chatham has grown with us, and we look forward to being a part of this new chapter in Chatham’s history,” he said.

Garibaldi said he wanted to take some of the urban draw, the “urbanity,” that brought a lot of millennials into the city and bring it out to the suburbs with spaces like The Station.

“One of the big things that the cities have offered that the suburbs are slowly starting to catch on to are the experiences,” Garibaldi said.

He referred to it as experiential retail opportunities, where people are not going into a store just to shop, but to have an experience.

“Maybe it’s virtual reality,” he said. “Or maybe it’s just laying down on some Boll & Branch bedsheets that they can then go home and order online.”

It’s about a diverse array of experiences, Garibaldi said — real and authentic experiences.

“We’re trying to provide unique experiences every time you walk in this building,” he said. “It’s different than going to the same old office doing the same old thing every day. You can be assured there’s always going to be something going on here, it’ll never be quiet.”

Garibaldi said the group and the space in Chatham are attempting to gear themselves toward the tech and innovation sectors while inviting people with unique passions and goals.

With all the talk of innovation and economic development in the air, one might say it was the explanation of the naming of The Station that Garibaldi provided to the audience that was the most captivating.

“You’re never at a station for an extended period of time,” Garibaldi said to the audience of around 50 gathered town officials, businesspeople and residents. “It’s a stop you make along the way to get to your ultimate destination. We want people in here that are looking to grow and move forward on their journey.”

The Station will serve as an anchor to Startup Moveup Chatham as the borough rebrands itself as a hub for innovation with plans for redevelopment and future retail opportunities.

The Station offers Hot Desks for those who occasionally work from home, Dedicated Desks for freelancers or those starting a business and Private Office Suites for teams of 1-10. The space also has conference rooms for hourly and daily reservations at different rates.