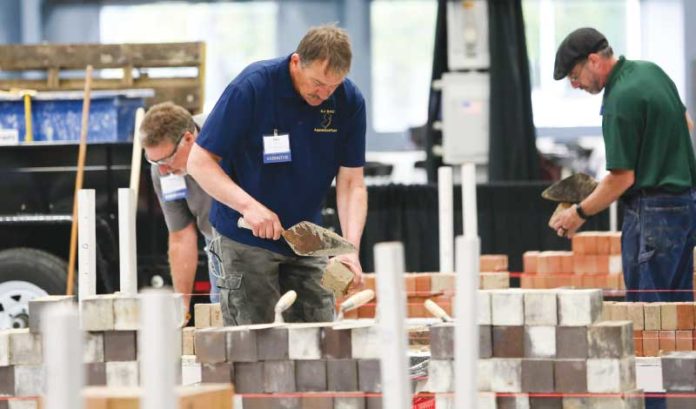 Labor unions and the employers they negotiate with in the construction sector both agree: They’ve got to build better bridges with Generation Z and its millennial predecessors.

The annual Construction Industry Career Day is just that sort of opportunity.

Like other industries, the construction trade sits on the shaky workforce foundation of Baby Boomers a few years from retirement — meaning there is a tremendous demand for replacements.

So, the annual event, held at the end of May, is when those in the industry get to tell high school students why working in the sector provides a stable career with good starting salaries and benefits. Best of all? The kids have a career path without college debt. That’s especially relevant now that millennials are lugging around tons of it.

Jill Schiff, the executive director of operations at Associated Construction Contractors of New Jersey, the organization that hosts the event in concert with other groups, busily coordinated the affair. And busily is the right way to put it — the event has grown tremendously.

“We see the word getting out about this, and not just to vocational schools,” she said. “This year, we have 75 different school districts coming here from all of New Jersey’s counties. That’s up from about 60 last year.”

This represents a triumphant return for the event. It was first started back in 2001 but was paused eight years later — in the middle of the country’s Great Recession — and only resumed two years ago.

“We had to put it on hold when the economy plummeted,” Schiff said. “We didn’t feel it was the right thing to do to bring people into an industry with around 40 percent unemployment. We were asked to bring this back in 2017 and we’ve had a lot of success with it since.”

Thousands of Garden State high school juniors and seniors, career guidance counselors and others showed up at the New Jersey Expo Center in Raritan Center to speak to representatives of trade unions and other industry groups about job positions in the sector.

They also got to pound nails and smooth mortar at mock jobsites, exposing prospects for the first time to what it’s like to work in the industry. Today’s attendees are also able to experience the construction jobsites remotely through virtual reality and other simulation technology.

“You have to introduce them to this in a way that appeals to that generation,” Schiff said. “And our trades go out of their way to do that.”

Robert Lewandowski, communications director at New Jersey Laborers-Employers Cooperation and Education Trust, said his organization and others haul in more of these devices every year to get attendees as close as they can safely be to construction equipment. Having technology be part of the students’ first impression of the industry is necessary, he said.

“It tells these students that this isn’t your grandparents’ construction industry anymore,” he explained. “I think there was a time you hired most construction workers from the neck down, mostly due to the type of work that carpenters and other trades were doing. But these jobs are more complex today.”

Although youth might be attracted to tech-minded industries, union leaders admit they’ve sometimes underestimated their patience for more tactile experiences.

During last year’s event, for example, Lewandowski’s organization came in with the idea that high school students would be glued to their phones. So, his team figured they would be entertained by activities such as photo booths with hard hats and lumberjack-like beards for silly social media selfies.

“It just didn’t work at all,” he said. “Rather than having their phones out, the kids were just so engaged; they wanted to get in there and practice building scaffolding or do pipe fusion.”

What works today might not tomorrow, but Lewandowski would put his money on authenticity remaining a constant in reaching the next generation of workers.

“I think kids today are suspicious of too much of a salesman,” he said. “They want to figure things out themselves — and they get to do that here at booths not filled with salesmen, but tradesmen. That resonates with them.”

Resonating with today’s young people isn’t just important for the continuation of the construction industry as it rebuilds a fast-retiring workforce. Lewandowski doesn’t have any illusions about every high school student attending Construction Industry Career Day and going out to buy a hammer the next day.

But the trade and its affiliated unions still want to nail the first impression, because that can last a lifetime.

“Ultimately, this isn’t just for the transaction involved in getting people into these careers, but it’s also about transforming peoples’ attitudes,” he said. “So, maybe when they go off to be an accountant, they can say they know what construction trades look like: It’s impressive and it’s an advanced career.”

Special quest: Recruiting for family business is different ballgame for even...