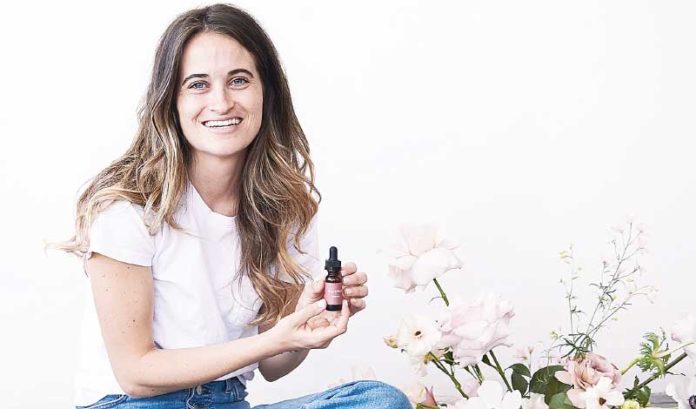 Alexis Rosenbaum had no desire to experience cannabis, she said, until she developed debilitating anxiety in her late 20s.

Her experience was positive — so much, in fact, that Rosenbaum, now 32, founded Rosebud CBD in Jersey City last year as a woman-owned and -run provider of cannabidiol, or CBD, oil.

The business has been a stunning success. Rosenbaum, the CEO, said she had more than $1 million in sales in its first year. And she’s not surprised.

“If this plant has affected me the way it has, who better to tell this story in order to help others open their eyes and perspectives, too?” she said.

Originally from Cincinnati, Rosenbaum said moving to Hoboken in the summer of 2017 was a key catalyst for her entrepreneurship — and great for business.

“Establishing myself as a ‘new’ Jersey girl who wants to have a company rooted here, to bring in product and money for the state, has been a huge pro,” she said.

And, much like her product, Rosenbaum said the business’s unfolding has been rather organic, with “amazing” connections having fallen into place.

“I’ve just tried to be real and honest and show my face while talking about the things I’ve experienced so that I can be here for our customers,” she said. “The plant has been stigmatized, but Rosebud is a safe place in which to continue to ask questions.”

Her search for answers, Rosenbaum said, is what led to her success, after all.

After graduating from Morehead State University in Kentucky with a degree in social work in 2011, Rosenbaum said she worked a variety of jobs that gave her lots of opportunity to observe leaders in small businesses, including as a front desk assistant, a sales representative, a personal assistant and a home manager.

“My husband was chasing his pro baseball career, and it was difficult to have a full-time job and still make time to travel and see him,” Rosenbaum said.

That is what gave Alexis Rosenbaum the idea for her first successful business.

“I saw a niche in my husband’s industry that no one was filling,” she said. “I would go to team stores and would not resonate with any of the gear, because everything marketed toward women was pink and bedazzled.”

“We made bracelets, lanyards, keychains and more, engraving personal messages onto the leather,” she said.

With a patent and licensing deals with Major League Baseball teams, the pair was able to take a $100 investment and build a six-figure business in less than two years, with a 70 percent revenue growth year-over-year.

But, when her husband left baseball, Rosenbaum said she lost interest and sold  Game Day Feels in 2017 before relocating to New Jersey.

“My husband was offered a job here and we believed we had maxed out our potential in Ohio,” she said. “It seemed like an exciting opportunity to challenge ourselves within a totally new space, next to one of the biggest cities where the possibilities are endless.”

Upon relocating, Rosenbaum said she found work as an on-call remote director of business development for a small marketing and communications agency.

But her anxiety only grew worse — until her sister convinced her to try full-flower cannabis.

“I saw immense changes in my life and stress levels, but, without being able to microdose, I sometimes became paranoid,” Rosenbaum said. “So, I hunted for something else to use.”

That’s when she discovered CBD, or the most prevalent phytocannabinoid found in the cannabis plant.

“It helped me catch my breath, feel more in control and slow down,” Rosenbaum said.

Because it is non-intoxicating, CBD is legal in all 50 states, regardless of other laws legalizing cannabis.

CBD, Rosenbaum said, can safely reduce anxiety, inflammation and pain in both humans and animals.

“But the products I was exploring, I still couldn’t identify where the hemp was being grown or how many people touched the product before it reached me,” she said. “That opened the door for me to explore the possibility that I might be able to do this on my own.”

Rosenbaum said that, through some research and explorative networking, she was able to connect and have several conversations with a farm in Eugene, Oregon, with which she ultimately would establish a relationship and trust over six months.

“I also was buying, testing and selling their oil in bare packaging, seeing if people would want and enjoy this product as much as me,” she said. “Finally, in the spring of last year, I decided to launch my own brand — and tell my own story — using the products grown at their farm.”

Rosebud uses nothing but organic coconut oil and organic hemp in its full-spectrum CBD oils, whereas competitors often use ingredients such as fillers, additives, flavorings or preservatives. 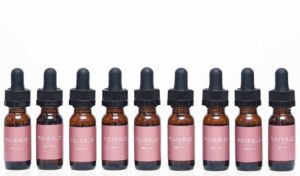 “We also don’t spray a single thing on our plants, as they are fed with everything they need from the earth,” Rosenbaum said.

Rosebud also has partnered with Lauren’s All-Purpose Salve to produce a 350mg CBD salve ($75) to help relieve ailments such as psoriasis and eczema, Rosenbaum said.

“The cost of running and growing a successful business, of working directly with a small organic farm, of paying our farmers and their employees a fair wage and of applying for certain certifications — all of that was taken into consideration when creating the pricing for our elevated, high-quality product,” Rosenbaum said.

Because it is non-intoxicating, the 2018 federal Farm Bill legalizes hemp (from which CBD is extracted) as long as products derived contain no more than 0.3% THC.

“That’s why having a direct connection with our farm is really important. Our product is handled by the same people all the way from seed to bottle, so there isn’t a lot of room for error.”

After running the business herself for nearly a year, Rosenbaum said she brought on several independent contractors to help manage customer service, retail sales, marketing, design, events business development and operations in January.

“I’m creative and I like having the flexibility to work on different projects as they come up, so I like working with people who also value that type of lifestyle,” she said. “But, as a small team, it’s difficult to get ahead.”

With Rosebud now in more than 100 retailers nationwide (including small cafes, yoga studios, barbershops and more in New Jersey) and moving more than 1,500 units per month online, Rosenbaum said she is now seeking investors to help her grow the business.

“During the first half of this year, we have been making sure our product, packaging and marketing is up to date with all of the new and upcoming regulations,” she said. “In the second half, we will be all about expanding.

“We want to be that real, authentic, transparent brand that people feel they can trust and talk directly with.”

Alexis Rosenbaum said there are several challenges to working within an industry associated with cannabis.

“Banks are not usually interested in taking on the risk of working within an industry that is not yet regulated,” she said. “And there are a lot of barriers to running an e-commerce business in this space, like credit card processing, website hosting, using mail services such as Mailchimp and, especially, digital marketing.”

“People are afraid of playing a role in the growth, marketing and sale of a legal product in an unregulated market with no real guidelines yet on how business should be handled,” Rosenbaum said.