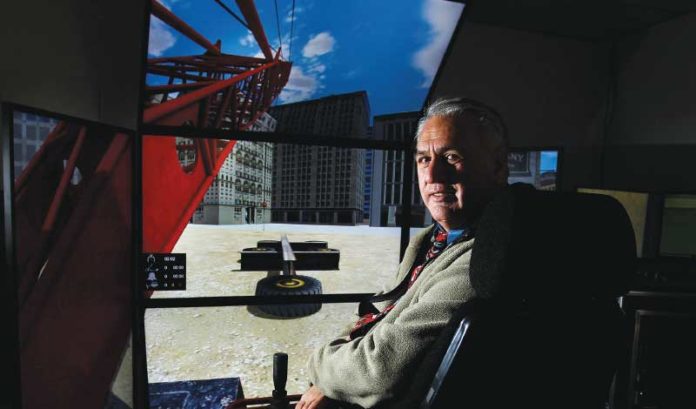 You won’t find any scolding labor leaders telling youth to put down the video game controller and get to work.

Instead, they’re handing them the controllers, so they’ll get to work.

Greg Lalevee, business manager for the International Union of Operating Engineers Local 825, said his organization is enticing millennials — and the generation that precedes them, too — with video game-like simulations of the sort of heavy machinery his members work with.

It has been a hit.

“So, for young people into their Xbox, we have this great opportunity now to easily transition them to this work,” Lalevee said. “These young people get to make an informed choice about whether this is something they want to continue down as a career path in a way that interests them.”

It’s just one of the ways unions are trying to stay ahead of the curve on the demographic shifts that have every organization scratching their heads.

What’s the best way to appeal to millennials? Lalevee isn’t sure labor unions have it totally figured out yet, but he’s certain that these organizations realize the importance of the question today — given this demographic’s increasing majority in the workplace.

His organization has found a mix of technology and education to be the missing pieces of the puzzle. The Springfield-based Local 825 is transforming its training program into a two-year technical college that’s responsive to the latest robotics, artificial intelligence and virtual reality tools.

“We want to be at the college fair with mom and dad and tell them that blue-collar work isn’t such a bad place to be,” Lalevee said. “The pay is decent; the benefits are terrific. And, oh, by the way, we’re not abandoning your child’s educational path. We can continue it.”

The end-goal is connecting with a young base of workers that can bolster union numbers that have steadily fallen over the course of millennials’ lives.

In 1983, the first year that U.S. Bureau of Labor Statistics had union membership data available (and also nearly the cut-off between millennials and the Generation X population before them), there were 17.7 million union workers. The number of wage and salary workers in unions stood at 14.7 million in last year’s BLS total.

Union leaders such as Lalevee are confident that millennials generally respond favorably to the idea of organized labor participation, even if they grew up during the tail-end of the country’s sharpest declines in union density.

In New Jersey, the impression young people have of labor unions is dictated largely by what part of the state they come from, according to Tom Walsh, president of a union that represents workers in retail manufacturing and a variety of other industries.

“I’ve found that there’s two different types of millennials: The millennials from urban areas are more receptive and eager to listen,” he said. “But, then, when we go towards the suburban areas, they don’t even want to talk to you.

“They think things are going to just pan out for them no matter what, so they don’t want to hear it. It’s a very strange dynamic.”

Walsh’s Local 262, like most unions, needs to win over millennial workers in order to continue to thrive. That’s not always easy. Millennials, even with the reputation that precedes them of being engaged do-gooders, aren’t always predisposed to see the value in union membership.

Walsh described an attempt to organize an ambulance group in suburban New Jersey that went awry when the company found out employees were talking to the union.

“They just completely stopped answering the phone,” he said. “But, at a place I’m organizing now in Elizabeth with a lot of millennials, one of their coworkers got fired — and that’s just making them feel more strongly about it. Now, they really want the union in there. They’re constantly calling, day and night, giving me information and asking me what they can do.”

There are young workers — and future union members, Walsh hopes — that have become some of the union’s staunchest advocates.

“And any time we ask if they’ll come to something, they’ll always be there,” he said. “You can’t count on that from all young people. Especially those from suburban areas, they have so much more fear.”

Walsh believes that, taken as a whole, unions have excelled at keeping up with technology and appealing to millennials in through digital channels. At the same time, he also thinks there’s a disconnect.

“Kids coming out of school are so often thinking that government officials are doing something like minimum wage bills out of the kindness of their hearts, and not community groups and unions pushing for this change for years,” he said. “We need to do a better job educating kids from an early age on what unions have done throughout history to improve the safety of workplaces and quality of life, because that’s neglected.”

With millennials in the workplace, have been handed an opportunity to reintroduce labor unions to a working population that doesn’t share many of the same preconceptions as other generations.

“We’ve been unfortunately stereotyped for a long time,” Lalevee said. “But I can go through our membership and introduce you to the Little League coaches, the Boy Scout or Girl Scout leaders, the PTO president. These are regular people involved in their communities. That’s who we are.”

And, as far as who these unions will continue to be — that’s up to millennials.

The other face of Janus

Tom Walsh of Local 262 said the expected immediate impact was that it would make the job of keeping union members active in the public sector extremely difficult. It didn’t directly affect his organization, but he was concerned about the blow it would strike to all labor unions.

Almost exactly a year into the change, no labor leader is saying unions are down for the count.

“If I’m just going off what sister (labor unions) have told me, it hasn’t really hugely affected them at all,” Walsh said.

One step back, two steps forward. That’s how Greg Lalevee of Local 825 described it.

“From what I understand, the public employee unions that Janus was a direct hit on have maintained or increased membership since,” Lalevee said. “And even us, though not necessarily affected by it, we’re getting more and more calls after it from people interested in unionizing their workplaces.”

CFO of struggling Bed Bath & Beyond dies in apparent suicide