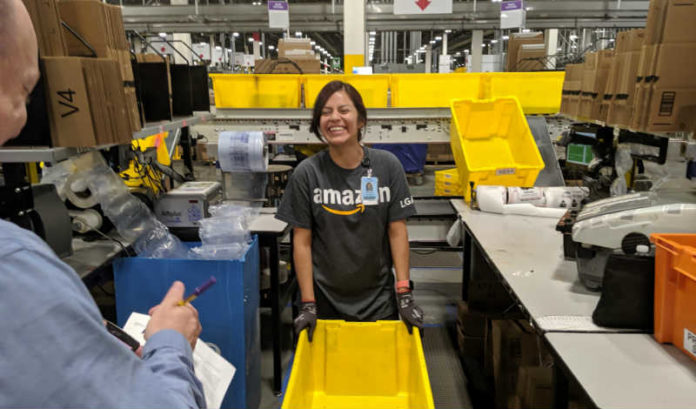 Fifteen football fields: That’s about the size of Amazon’s fulfillment center off Route 27 in Edison.

And, like a football field, it’s not short on action.

Norman, a spokesperson for the e-commerce giant, was speaking at Amazon’s first behind-the-scenes media tour of the Edison fulfillment center leading up to the company’s Prime Day event.

The 900,000-square-foot facility, which serves as a warehousing and distribution center, holds over 2,000 full-time employees, many of whom are referred to as “warehouse associates.”

And despite nearly a million square feet at the site, Norman said Amazon is close to using every inch.

“We maximize our available capacity in this building,” she said. “We want to have everything a customer could possibly want, from A to Z.”

The massive facility holds tens of millions of products with miles of conveyor belts weaving throughout the building.

With a 4.12MW DC system that has 12,654 solar panels generating 22% of the building’s annual energy, the Edison warehouse benefits from Amazon’s 19th operational rooftop solar installation in the country.

But the building will probably look a little different on Prime Day.

Prime Day is a day — two this year — when Amazon Prime members get exclusive sales and savings on hot-ticket items. On July 15 and 16, Prime members will have access to over 1 million deals globally, with Alexa-enabled devices seeing their biggest deals yet.

That’s sure to keep the warehouse associates busy.

The company began operating in New Jersey in 2012 and now has over 17,500 full-time employees throughout the state. Amazon operates similar fulfillment centers in Avenel, Carteret, Cranbury, Florence, Logan, West Deptford, Robbinsville and at the Audible headquarters in Newark.

“In New Jersey, we have 66,000 authors, developers and small business sellers using Amazon to sell their items,” Norman said.

The company plans on opening another fulfillment center in Burlington this year that will bring an additional 600 full-time jobs to the state.

Amazon said the company has invested over $10 billion in the state since 2011 and that there are close to 31,000 organizations in the state that customers can support by shopping on Amazon Smile.

This year’s event is Amazon’s fifth annual Prime Day and was created to celebrate the company’s 20th anniversary.

“50% of what we have in our fulfillment centers is typically owned by small and medium-sized businesses,” spokesperson Courtney Norman said.

On Prime Day, U.S.-based Prime members will be able to shop dedicated pages of deals from local artisans and entrepreneurs.

Amazon also has increased the number of countries it’s delivering to from 17 countries last year to 18 this year.