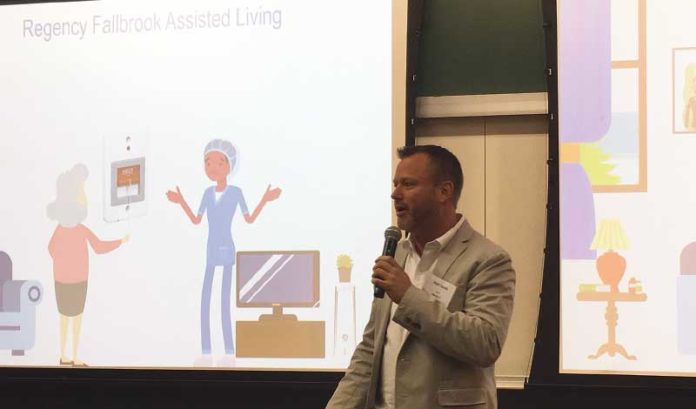 They were Catapult, from Montclair, an ad tech company that lets businesses easily insert high-quality video advertising into videos to acquire customers; UrboLabs, from Freehold, a mobile app that allows organizations and businesses to interact with users’ devices without the costs and challenges of supporting their own custom apps; and Speak2Software, out of Morganville, a voice command solution for assisted living facilities.

Representing Stevens Institute of Technology, the Hoboken college where the meeting was held, was Ribbit.io, a startup that uses crowdsourcing to connect consumers with sustainable eating establishments.

The winner of both the investor panel and the audience choice awards was Speak2Software.

Smith’s pitch grabbed the panel and the audience with a compelling example of how the software would solve a problem in assisted living residences. He presented the scenario of an elderly woman pulling an emergency cord to ask that the temperature in her apartment be turned down.

“This happens over and over again in assisted living facilities. Requests are made that are not emergencies that take up a lot of the nurses’ time. And, when they are emergencies, they are not really treated as such,” because the staff is conditioned not to treat every time a cord is pulled as an emergency.

A side benefit is that the resident doesn’t have to get up and risk a fall, the No. 1 cause of injuries among elderly people.

“Our mission is to improve care for our aging loved ones through voice command,” Smith told the audience.

The company integrates voice technology with the existing pull cord system found in many assisted living facilities to allow residents to give vocal commands. The company has 24 workflows available — for example, housekeeping, maintenance and productivity — so that all the resident has to do is make a simple request. It is then sent to the right person, who responds.

“This increases productivity and lowers costs, saving a nurse a ton of time,” Smith said.

The company is also keeping statistics and using predictive analytics to determine gauge what might happen to a resident based on what has happened in the past.

An audience member wanted to know how much customization was required for each new customer’s facility. Smith answered that the platform is cloud-based and doesn’t require a server on the premises. The startup will customize the service for each facility for a fee, or will train someone on site to do it.

One of the investor panelists suggested that the founder spend some time talking about his previous startup successes, as investors want to know about a founder’s track record. Another wanted Smith to spend more time discussing the implementation of the system on the back end.

Catapult was represented by Zack Rosenberg, co-founder and CEO, and James Altschuler, who leads the sales team. The company offers a unique form of advertising that would allow small business owners to insert high-quality video advertising in online videos to attract more customers. Rosenberg said that it could make video advertising easy and affordable, while providing the “same high-quality video that you would pay tens of thousands of dollars for. Yet we do it for $500 per month.”

The videos will have calls to action to support the brand.

“At the moment, the content is being created by us and our team. That will change over time, as we start to bring on more partners to create content for the platform,” he said.

Rosenberg added that the workflow is easy, merely requiring the customer to select content from the company’s marketplace, and upload a logo and some information about the business. Each video will be automatically distributed to social media networks.

Patent pending technology has allowed the startup to launch, track and learn from audience reactions, and “this will affect how and where the videos will be posted in the future, thus driving more (return on investment) for the business.”

A member of the investor panel said that he was hooked on the idea until he found out that Catapult was doing the content creation, which could be a drag on the company. He also suggested that the presenters say more about the partnerships they have already established.

Pitching for UrboLabs were founder and CEO Arthur Guberman and Chief Technology Officer Dmitry Hryppal. The company offers a universal app called Urbo that will, for example, notify anyone who follows a particular restaurant about the current lunch specials, or inform parents that Little League practice has been rescheduled due to rain.

Building a mobile app can get very expensive, Guberman stated, so Urbo lowers the overhead for small business users.

“A unique design lets us consolidate features into a single global app, eliminating the need for subscribers to have multiple applications or interfaces. A user who downloads Urbo is able to follow any subscriber that they like.”

UrboLabs has patent pending technology that will give companies that join its ecosystem a customized app within 60 seconds, he noted. The company’s processes are patent protected, and it has already raised $200,000.

The main issue for members of the audience was the oversaturated market for apps like this, but the Urbo team stated that they make it easy for any user to communicate with any business. For the businesses themselves, the company provides them with a mobile app just for signing up for the platform. Then UrboLabs also helps them sustain a mobile presence.

One of the judges asked how the users could make sure they were only getting information from the specific companies they want to hear from. Another suggested that the presentation would have been clearer if the pitchers had given an account of one example that went through the entire presentation.

Matthew Cristaldi presented Ribbit.io, the Stevens Institute of Technology student entry. Cristaldi is co-founder and CEO of this startup, which lets users locate ecofriendly restaurants wherever they are.

“Diners are looking for restaurants they know are sustainable and environmentally friendly,” he stated.

The startup uses crowdsourcing for its service. Consumers interact with the app in three ways: They contribute content by answering questions about the restaurants they’ve been to, they discover other restaurants nearby via geotargeting, or they can browse through other customers’ choices in their local areas.

“We generate an algorithm that makes these restaurants easily identifiable,” using a letter grade and code, he said. “We are trying to reduce the amount of energy that goes into (a diner) making a decision. For us, this makes scalability easy.”

He noted that there is a subset of millennials who will be willing to pay more for sustainable goods and services.

An audience member wanted to know if the startup had tested with restaurants, and said that it would be good if the company could educate restaurants, convincing them to become more sustainable so they could be marketed through the app. One judge noted that the presenters needed to identify the sources for the statistics shown on their slides.