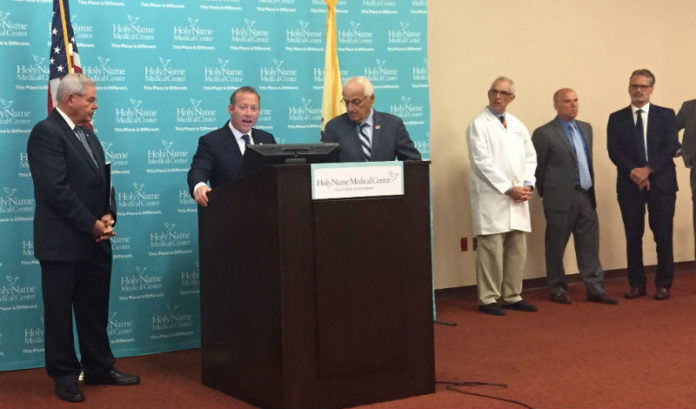 There was the incredible number: The country is expected to have a shortage of 120,000 doctors by the year 2030.

And the incredible local number: New Jersey is expected to be short 2,500 doctors next year.

And then there was the even-harder-to-believe number: Holy Name Medical Center is only allowed to train six medical residents a year, thanks to a regulation based on 1996 statistics.

In that year, Holy Name had just six residents — thus, that is its limit today.

U.S. Rep. Josh Gottheimer (D-N.J.) is looking to change that, proposing what is called the Graduate Medical Education Bill that would allow hospitals to get reimbursement to train as many doctors as they are able.

It’s a way, he said, of tackling the coming physician shortage head-on — improving health care for state residents and the state economy at the same time.

“Our legislation corrects the arbitrary cap, which will help us recruit and retain more talented physicians to help our New Jersey medical community grow,” he said. “It will make graduate medical school slots available to hospitals that have been locked out for decades now and allow hospitals to invest in teaching programs to attract medical students to Jersey and keep our health care workforce competitive.”

Gottheimer, flanked by U.S. Sen. Bob Menendez (D-N.J.) and U.S. Rep. Bill Pascrell (D-N.J.) at an event at Holy Name in Teaneck, is confident the GME bill can get through. Menendez and Pascrell said they will use their status in their legislative houses to see that it does.

“It’s just common sense to have more hospitals to have our new doctors train here in New Jersey,” Gottheimer said.

Holy Name CEO Mike Maron agrees. But, he does so knowing that nothing about the current regulations make sense.

Maron, the well-respected health care thought leader, has been stymied by this ruling for years. He points to nearby hospitals to show just how arbitrary the cap is. Simply put, every hospital is capped at the number of residents it had in 1996 — unless the hospital in question didn’t have a program. Those medical centers can add residents at will.

“Palisades General had none in 1996, now they have over 100 residents — and they are getting fully reimbursed, because the rule says if you had zero in ’96, you’re free to go,” he told ROI-NJ. “(Valley Hospital CEO) Audrey Meyers could do this unencumbered tomorrow. She wouldn’t have to do anything special. She could just start it and get paid for it. I can’t.”

All because of something that happened more than two decades ago.

“What happened in 1996 was a (Centers for Medicare and Medicaid Services) regulation,” Maron said. “And, in order to change the regulation, you need new legislation. So, 1996, believe it or not, is the base year for how Medicare reimburses hospitals today across all services.

“The (system) Medicare uses to pay us is based on 1996 practice. Graduate medical education is a component of that system. And, so, what they did is, they just froze it.”

Despite this, most hospitals are not impacted today. Many did not have programs in 1996. Others have since joined greater health care organizations.

“There aren’t many of us left,” Maron said, refereeing to standalone hospitals.

This confusion, he said, caused a previous version of this bill to be presented poorly.

“The (Congressional Budget Office) marked up the bill all wrong,” he said. “I remember the headline: It said this bill would cost more than building a wall. How are you going to get that passed?”

Menendez said he is hopeful the new bill can be attached to upcoming legislation on Medicare.

He said no one in the state would object, saying more than 300 graduates last year did not have residency programs available. Holy Name, he said, would gladly take them.

“We understand the resources and investment that are needed to be made for this to be a successful program,” he said. “We are 100% committed to working with the excellent leadership here and identifying what those resources are, what those strategies are, so we can be partners and help support further growth of this residency program.”

Maron said new rules — and a new partnership with Mount Sinai — could help change another number: The small percentage of medical graduates who actually want to become the doctors that are needed most: general practitioners.

“Many of the major academic centers want to train specialists because the general perception out there is that there’s more money to be made being a specialist and better work hours,” he said. “What we’re trying to do is dispel that myth.

“We’re going to show doctors that you can have a balanced lifestyle and have a very rewarding career as a primary care physician. We think we can move that needle significantly by exposing them to how we do things here.”