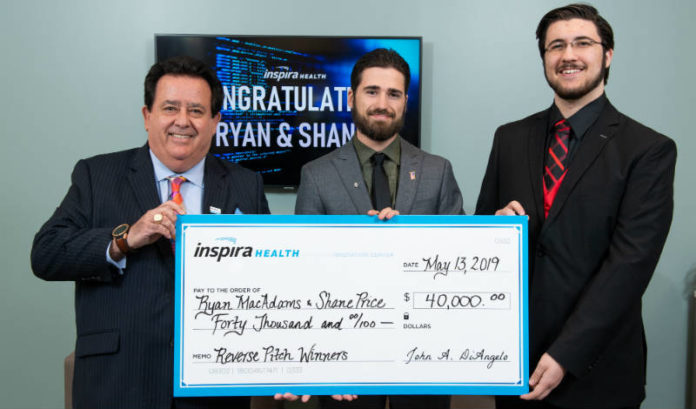 Health technology is where the money is at.

It’s also why some of the most basic things, like app development, are so expensive.

The growing industry involves a lot of pitching ideas to industry professionals — but Inspira Health recently reverse-engineered that process and is utilizing its innovation center to groom a new generation.

“It’s kind of like taking an internship and flipping on its head,” Dave Johnson, vice president of innovation, said.

Using what essentially amounts to a request for proposal process, the health system went to New Jersey’s higher education facilities with a pitch for two different applications to be designed: a security app and a productivity app.

“The way we would have done it in the past is maybe hire some interns over the summer and have them go at it,” Inspira CEO and President John DiAngelo said.

Instead, it was a project pitched to schools to see who would apply to co-develop the apps with Inspira. The program launched in March, and Inspira has set a completion goal for September.

“We had seven colleges and universities participate,” DiAngelo said.

The process began March 12, when the health system set up an information session to tell the students about the software and technical requirements.

The students had to submit their proposals and supporting materials by March 31. The projects were reviewed blindly — the panel had no idea which applications they were reviewing, DiAngelo said.

DiAngelo and Johnson said the process is mutually beneficial, as the students get real-world experience but also have their ideas supported in a more immediate way than pitch competitions provide. Meanwhile, the health system is able to work on its system without contracting with costly vendors — the program costs the same as having interns for a full summer, but it’s cheaper than using a third-party company.

These programs are being funded by $20,000 each, going to Price and MacAdams.

That gets paid over three payments and is tied to two-week milestones — an industry standard that the students themselves pitched, Johnson said.

“They’re gaining real-world experience in a health-care development environment, they’re learning a lot about what health care security is … so, they have to take a lot of those types of things into consideration,” Johnson said.

Price and MacAdams have a goal of implementing the new apps by the end of September, DiAngelo said.

Johnson said the process Inspira used could be a first in the region, based on conversations he has had with peers in the industry.

In addition, because the chosen students have professional mentors, plus the subject matter experts at Inspira, it’s a very collaborative approach, DiAngelo said.

“We’ve got a much better idea of who interns are and what they are doing and what capabilities are going into this than we would if we just hired someone from one of the colleges,” he said.

“(The process) gives us a much better snapshot of who some of these kids are.”

And, if all goes well, the students are plugged into the system and could end up being hired once they graduate, if they want, DiAngelo said.

The effort has created a process that provides ease of mind for both the students and the health system.

“When you’re doing these things for the first time, you never know what kind of response you’re going to get,” DiAngelo said.

“This thing could have fallen flat.”

Cohen named chair of NJIT board of trustees