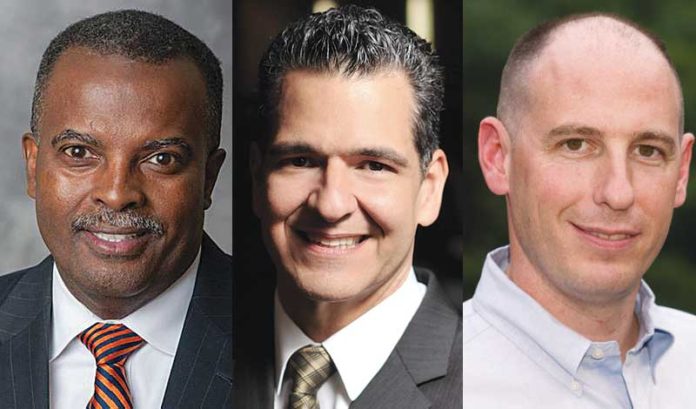 When Gov. Phil Murphy hired a chief diversity officer, Hester Agudosi, to help address the struggles of the state’s dense and diverse population in the spring of 2018, the leaders of the state’s minority business chambers applauded.

It was another example, they said then, of the new administration’s interest in addressing their needs in the state.

Since then, however, they feel little has been done to help increase the number of contracts the state has with diverse businesses.

“What we are experiencing, from a number of corporations and public agencies, is that they’re saying the right thing, but they are still letting contracts go,” Harmon said.

There has been no discernable change in the bidding process, nor attention to carveouts, he said, adding that this is also true in the private sector.

“It’s like saying, ‘We are going to invite you to the party, but you can’t dance; you can stand around and look at everyone else enjoy themselves,’” he said.

There are three main obstacles to increasing the state’s minority business spend, the chamber heads said:

Office of Diversity and Inclusion officials say actions are being taken, however.

For example, veteran-owned businesses have their fee waived when registering with an agency, and there is a website being launched that would serve as a central hub for all things related to procurement for diverse companies, among other things.

And, since it is currently illegal for the state to actually reach out to companies specifically to tell them to bid for any new contracts, the state is relying on Agudosi’s office to spread awareness to the businesses on how to bid and when opportunities become available.

That is being addressed through the first ever NJ Connect summit, being launched in partnership with New Jersey Institute of Technology on Sept. 20.

There are other measures as well, such as the new film tax credit including a diversity bonus.

Agudosi’s office is also aware that the first round of medical marijuana expansion licenses lacked diversity, and, after an implicit bias training, a shift was seen in approvals for the next round.

Treasury officials told ROI-NJ recently that the state is aware it needs to do more and is working on these and other initiatives.

So, where is the pushback largely coming from?

“My personal experience working with Hispanic-owned firms — my brother had one that was 150 people — I don’t even market myself as a Hispanic-owned business, because you say ‘(minority) or small,’ right away, the body language changes,” he said.

“They feel like you are not capable of doing that task. Even though you may have completed that task 100 times, successfully, and rated by objective agencies, there is still a perception that, ‘Oh, you’re a minority firm, I’m doing you a favor, I’m giving you a handout.’ So that’s a bias that permeates through New Jersey’s business culture.”

Cantor said that, if the state and other companies truly wanted to commit to diversity and inclusion, they would change the competitive bid process to allow minority businesses to compete.

“Either go to a better system or go to a price preference law, which a lot of states have implemented with success, like Michigan and Connecticut,” he said.

Of course, the leaders said better systems or programs do not add much value if they are not being documented. They said the state’s method for tracking this information is little more than word of mouth.

This is a huge impediment, the heads of the three chambers all said.

For example, they have been fighting for the numbers from utility companies’ spend on minority- and women-owned businesses to be public.

“It’s so we know where they are, and we can help them do better,” Harmon said.

“Without that information, it’s not a good faith effort, nor an effective strategy, to improve the competitiveness of the state.”

All three sit on the Board of Public Utilities’ Supplier Diversity Development Board, and have been unable to move the needle on this issue.

In a state such as New Jersey, touted as the most diverse in the country, the task at hand should be easier, Harmon said.

Medina agreed, adding that issues are reflected in company boards, which are often still lacking in diversity.

“It seems like it’s inside baseball and they are all putting each other on each other’s boards, and we need to stop that,” he said.

“Right now, I think these corporations are filled too much with insiders.”

Medina, who is on the board at Horizon Blue Cross Blue Shield of New Jersey, said having more diversity on boards will spread greater policy and procurement with a focus on diversity.

But that hasn’t worked at the supplier diversity board.

“It’s a really good, diverse community on that board,” Cantor said. “And, yet, we haven’t been able to move the needle at all for the diverse communities. And nobody knows how they are doing with diversity spend. That information should be public.”

He and others believe the transparency will force accountability and ensure the utilities are increasing their spend on minority businesses.

And while there are laws in New Jersey governing set-asides for veterans, Cantor said there has not been much enforcement.

“We represent very diverse communities, and, at this point, it almost feels like it’s an impossibility to effect change to get procurement for the people we represent,” he said.

“For three and a half years, that law has been on the books, and not one contract has been set aside to disabled veteran-owned businesses. We’re not individuals, we are all diverse together, lump us together and let the state put some teeth behind it … and get rid of all the red tape that is standing in the way.”

Harmon said that, at the end of the day, it’s the subtle and technical things that still lack progress.

“It’s not any one industry, it’s across the board,” Harmon said.

“Unions have preference in New Jersey. Gov. Jim McGreevey, his first executive order, was public contracts are subject to private labor (union) agreements. So, they had a preference. But, when we talk about women- and minority-owned goals, they want to run us to court and have court challenges. I think that’s wrong.

“We want to reset the conversation in New Jersey. Particularly with the private sector first, and then the public sector, for diversity and inclusion.”