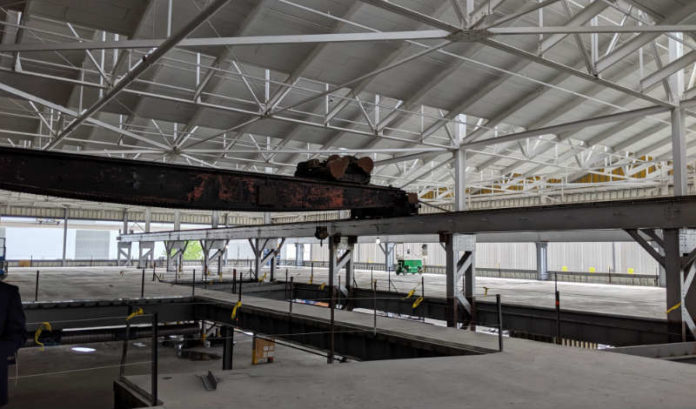 There’s a change that occurs when someone takes their first steps into the Visitor Center of Building 78 at the Kearny Point development.

From industrial to contemporary.

McCarthy was speaking at the open house event for The Annex, the close to 88,000-square-foot planned attachment to the already well-reviewed Building 78. Building 78 is a part of a collection of coworking and flexible-use office space on over 100 acres of land in South Kearny known as Kearny Point.

But when you walk from the crowded halls of startups into the unfinished Annex, a 100-year-old steel crane that was used to make ships for the U.S. in World War I and II dominates the landscape.

“At one point, they were making ships every 51 days,” said Rob Morris, Equity3 president.

The crane is set on two massive beams that helps support the integrity of the Annex’s structure. The visitor’s attention is immediately drawn to it.

Hugo Neu is the owner and redeveloper of Kearny Point. It partnered with Equity3 to fill the still-vacant spots in Building 78 and the spots to come in the unfinished Annex.

“We’re retaining historical features like the craneways, and we’re keeping two of the original steel cranes that are almost 100 years old,” Shears said.

They’re also keeping the polished concrete floors and the saw-tooth roof, which he said was created so natural light could flood into the space while people were working. Shears said the tall ceilings will help with this, too.

“Design is a huge factor for people when they come here. They’ve never seen anything like this before, especially in New Jersey, and we’re proud of that,” he said.

But, while Equity3 and Hugo Neu want to maintain the industrial atmosphere, they have a different idea in mind for the tenants.

“So, one of the goals of the landlord is to eventually replace the industrial tenants that we have right now with more environmentally friendly uses,” McCarthy told ROI-NJ.

It’s the environmental sensitivity of the landlord, he said. And it’s been driven home to them.

But, with this common denominator of environmentalism comes a greater sense of community.

“I guaranteed if you were trying to make yourself a coffee (in one of the communal kitchens) and couldn’t figure it out, someone’s going to see you and offer to help,” he said.

And Shears said that collaborative environment goes way beyond that, from a community Facebook group to shared workout sessions on the roof and a buildingwide event every week. There are even companies in the building that have collaborated on projects together.

“Two of our tenants, C&S Wholesale Grocers and Babo, came together and created a joint venture partnership,” Shears said. “They met here.”

He said people have hired one another within the building for work through the Facebook page.

Equity3 and Hugo Neu said The Annex will consist of new high-tech flex office space for lease starting at 1,500 square feet. The asking price for rent in The Annex is $35 per foot.

The space will total 87,934 rentable square feet with 283 workstations, 15 offices and 109 conference seats.

The developers broke ground on The Annex in January of this year and hope to cut the ribbon on the space by December this year or January of the next.

Businesses that start at or relocate there may be eligible for tax incentives and credits through the Opportunity Zone program.