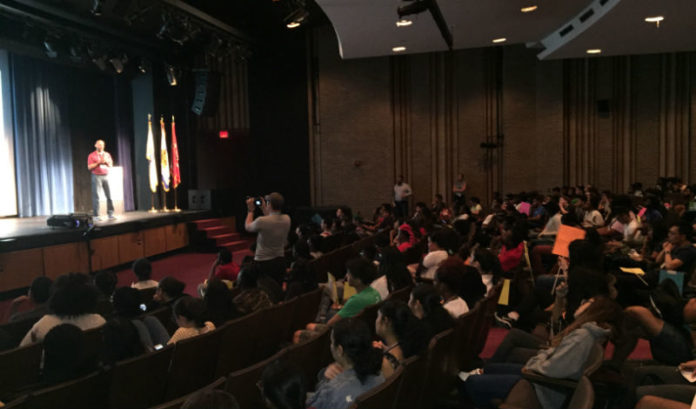 VOICE Summit founder Pete Erickson said he was overwhelmed and overjoyed at the overflow crowd that attended the inaugural event a year ago.

But, for all the presenters, developers, engineers that flooded the campus of New Jersey Institute of Technology in Newark, Erickson said one group had a bigger impact than all of the others: the local students from Newark schools.

“Last year, we brought a few students onto campus and it was eye-opening to me how big their eyes were and how much of an impact that had,” Erickson told ROI-NJ.

That’s why, this year, the VOICE Summit is bringing in hundreds more young people.

The event formally opens on Tuesday, but thanks to support from Prudential Financial, more than 500 junior high and high school students from underserved communities are attending seminars and demonstrations of voice technology on scholarship Monday.

It’s an effort, Erickson said, to not just show them what the future will be — but what their future could be.

“Being able to expose kids to a conference like this is incredible,” Erickson said. “We have a full day of programming, keynote addresses and more than 18 exhibits for them to see and observe.

“It just exposes them to this whole world, this new economy. They may not get everything that’s going on, but just getting them involved with this technology and exposing them to this opportunity will make young girls and boys be able to say: ‘I can be a technologist. I can work for Amazon or any of these companies, big and small, that are here.”

Prudential, long a leader in the Newark community, discovered the community is ready for high-tech education.

“We did a STEAM event with Newark public schools, and you should see how motivated these kids are,” he said. “For them, there’s no barrier. They not only want in, they want in now. They are advanced as any other students we’ve seen in any other demographic.”

Connecting to the VOICE Summit will feed that enthusiasm, Heafitz said, and make local schoolchildren understand their city is a tech hub.

“(They can) be in a community that has the most advanced technology,” he said.

Prudential, Heafiz points out, is a leading tech company, too.

“We’re as an insurance company, but we lead in data science and in advanced analytics, in actuarial science,” he said. “Some of things that have I’ve been around for a long time, we are on the cutting edge. It’s exciting.”

Heafitz said Prudential is using its technology to make sure all underserved communities benefit, pointing out the way the company is ensuring its hearing- and visually-impaired employees can benefit.

Heafitz said it’s about making sure all barriers are broken down in the tech world.

“There’s a lot of different ways it’s looked at: How do you remove racial bias, ethnic bias and gender bias? Diversity of voice is critical.”

And if those residents are females, that’s only better.

Bloom said he knows the technology community needs to do a better job at attracting females.

“While we’re at 26% percent women, that’s just not enough,” he said. “We need to continue to increase that number.”

Conferences such as the VOICE Summit help tremendously, Bloom said.

“When people from underserved communities can see (technology) applications in real life, I think it encourages a more to look at technology,” he said.

Erickson agreed. He said he knows the impact it would have had on his life.

“If I could have went to a technology conference back then and got to see all this, it would have started my mind earlier in my, in my career,” he said. “That’s why I knew it was so important to give more students access to this conference.”

NJBIA teams up with N.J. community colleges, others in effort to...