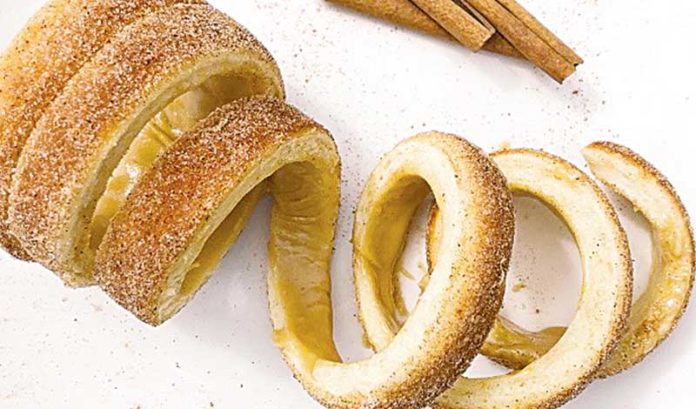 The big moment every entrepreneur has — the time they are convinced they’ve found the next great business opportunity — can happen anywhere.

For Nicole Shaw-Provillon, it happened on the streets of Budapest.

She was sampling street food when she tasted the best dessert she said she’s ever had.

The item, a chimney cake, can best be described as part churro, part pastry. It comes in the form of what appears to be an expandable onion ring and is served on a pole that looks like a rolling pin.

“I said to myself, ‘Why is this not available in the United States?’” she said.

Shaw-Provillon, living overseas due to a job transfer for her husband, was used to trying new foods. And, having traveled the globe extensively during her job in internal audit with International Flavor and Fragrances, she thought she had seen it all.

“This was different,” she said.

“I like to say it’s a cross between a cinnamon pastry and a French beignet.”

But it was about more than just the product. It was the preparation, too.

“It is prepared right in front of people,” she said. “Most people are completely fascinated by the process.

She soon decided to call it her business.

With a degree in accounting and international business from the University of Maryland, a CPA and an MBA from Columbia, Shaw-Provillon knows business.

But she also knew a full-time job in Hungary — especially with her husband on the road extensively — was not possible.

“My husband was traveling for work, so I needed to be flexible and available for my kids in a foreign country. And full-time corporate jobs require a great deal of hours.”

It turned out to be just what the accidental entrepreneur needed.

“I was able to learn the craftsmanship of this secret treasure of Central Europe while living there for four years,” she said.

Shaw-Provillon traveled to Transylvania in Romania, where the item originates. She was also mentored by an award-winning chimney cake baker in Hungary.

When she returned to New Jersey in 2017, she took a class at the Culinary Institute of America in Hyde Park.

She was ready to launch her business, Kurly Kürtősh.

Shaw-Provillon describes herself as a private caterer, someone who brings a form of “dessertainment” to private parties and business functions in the tri-state area.

She’s proud that she has worked events in private homes and grateful for the opportunity to bake for the largest public event at the Hungarian Embassy in Washington, D.C.

She expects to work approximately 100 events this year.

“My clientele is anyone who hosts parties, appreciates high quality food and loves unique experiences,” she said.

Because of this, Shaw-Provillon has created an upscale version of the product. She feels it helps separate her product from the few versions she’s been able to find in the U.S.

She has baked more than 7,000 chimney cakes. And she said she learned early that using the freshest and best quality ingredients means everything.

“I work with a spice purveyor in New York City, who services the top chefs in Manhattan,” she said. “She curates the highest-quality flavors; I offer a strawberry topping that comes from a local farm in California or a mango topping that is a rare variety from the Philippines. And then I have spreads — our Nutella is imported from Italy, and I offer a gourmet maple cream icing from a sugar house in New Hampshire.

“I use pure ingredients. The flour is imported from Europe. I have a French-style butter. I’m using organic milk. I’m using real ingredients, so you have a very pure flavor, there isn’t an aftertaste. And I use an authentic Hungarian recipe, so it’s not overly sweet.”

The food quality, however, is just half of the product. Each event, she said, is an experience.

“You watch it being rolled onto the ‘rolling pin,’ baked in the oven and then you select your topping and spreads. It’s unbelievable to watch and taste. And many people ask if I invented chimney cakes.”

Shaw-Provillon is building her brand one show at a time.

She is self-starting, needing only an outlet indoors and space outdoors (where she uses a camping battery to power her oven).

Shaw-Provillon has done demonstrations in Bloomingdale’s and had pop-up shops in Williams-Sonoma, Pottery Barn and Chef Central. And she will set up stands at farmer’s markets in select neighborhoods.

A recent event brought her a booking at a graduation party, a 50th wedding anniversary and a Shabbat supper.

Shaw-Provillon said she has done business events — a company recently hired her for a celebratory event for its employees. She is hoping to build that part of her sales as well as get into the coveted wedding business.

She’s confident she will succeed. Her business, she said, has a differentiator.

“My whole mission is to really drive happiness,” she said. “Our tagline is ‘Unkurl your sweet spot.’

“The presentation includes three elements that always make people happy: a new and unique experience, high-quality food and being amongst friends and family.

“This is really the heart of the business.”

One that was discovered on the streets of Budapest.