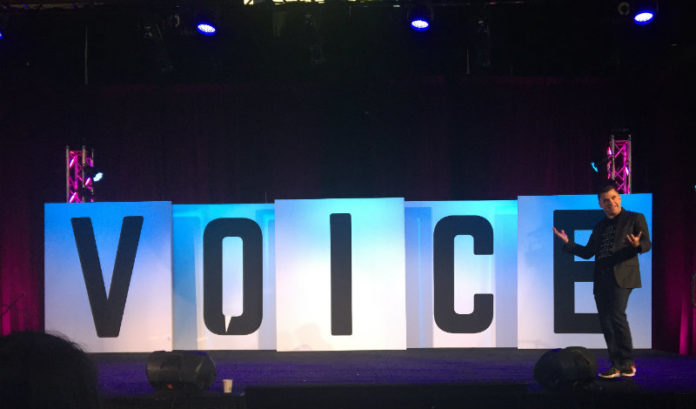 Dave Isbitski, the chief evangelist for Amazon Alexa, knows how quickly the product he helped develop has become mainstream in society.

“It’s crazy to think, but five years ago, if we were interacting with technology in the house, we were walking around and looking at our phones,” he said.

Isbitski, the keynote for the second annual VOICE Summit, spoke Tuesday morning at New Jersey Institute of Technology in Newark, explaining to the overflow crowd just how quickly the technology is moving.

In his keynote, he explained how voice technology is the next natural progression in the industry.

“Every 10 years, the way people interact with computers changes,” he said.

Then, with uncanny accuracy, he detailed how PCs ruled the ’80s, web browsers came in the ’90s and the app and mobile revolution followed the turn of the century.

Today, they both said, is the time when voice is taking over technology.

A walk around the exhibits at the event showed its ascension already is taking place.

Numerous companies were offering options they felt were better than Siri — including Bixby, which Cheyer is developing for Samsung.

There were voice products that help students learn, help gamers clip (and paste on social media) their favorite moments of success, help companies translate their content into words — and one offering speakers capable of doing a variety of styles, accents and languages.

For businesses, there were ways to voice activate databases, analyze customer preferences and provide better security, among dozens of offerings.

And there were plenty of ways to help people around their house — including an Amazon Alexa Smart House.

The possibilities are endless, Cheyer said, especially when companies — and consumers — understand the biggest truth about voice: It works in so many places a browser and a phone do not.

In the kitchen, in the car — anywhere life takes you.

LaCharite, the head of the AI Leadership Institute who also gave a morning keynote, talked about how voice helped give her father his back — after a devastating injury impacted his ability to use other technology.

And she talked about voice programming helping those with special needs — including her own son, who has Down syndrome — communicate at a faster rate.

Yes, voice is clearly here. And not always in easy-to-hear, robotic ways.

Customers, she said, can now buy tickets through voice.

And, when they interacted with AI voices on social media, they often are interacting with the human voices of employees at the airlines.

The human touch — the voice — she said, is everything.

“Voice technology is at the center of everything we do,” she told the crowd.

KLM learned its need of such a service during a global event not of its making — the Iceland volcano eruptions of 2010, which brought air traffic to a standstill throughout much of Europe for more than a week.

It was at that moment, van der Lee said, that the airline found its voice in social media, realizing the value of conversations.

It helped KLM find its voice. Today, 50 percent of their customer interactions come from voice-activated artificial intelligence, she said.

And, in KLM’s case, voice is used to improve customer service, not just provide content.

The first words anyone hears when they contact KLM are, “How can I help you,” van der Lee said.

If the developers and entrepreneurs at the VOICE Summit have their way, such a phrase will soon be ubiquitous in a voice-first world.

Another viewpoint: Women need to be seen as leaders